Tua Tagovailoa Has The Most To Lose In The NFL Draft

The NFL Draft is still more than two months away. However, with no more NFL football on the schedule, it's time to start looking toward the future. And no player will be more dissected than former Alabama quarterback Tua Tagovailoa.

There's no doubt Tagovailoa is tremendously talented. In three seasons at Alabama, he completed 69.3 percent of his passes, threw for 7,442 yards, and had 87 touchdowns compared to just 11 interceptions. For good measure, he ran for 348 yards and nine more touchdowns.

The biggest problem? No one seems to know just how healthy Tagovailoa is – including the quarterback himself. And that could cost him millions of dollars. 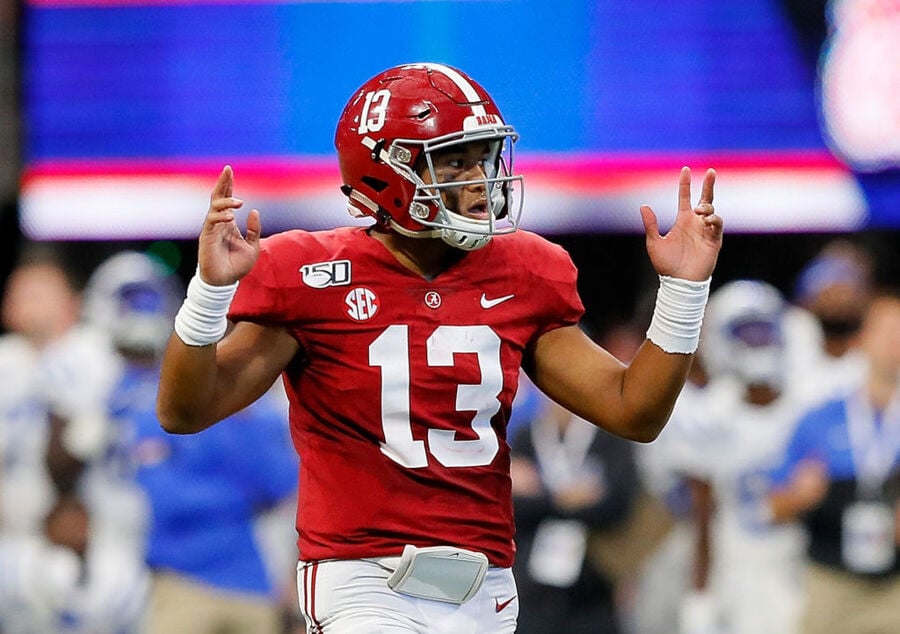 "I don't think any of the doctors can see the foreseeable future," Tagovailoa said recently. "None of the guys rehabbing me can tell me that. From what [specialists have] seen in New York, everything looks good, but you can't really tell until the three-month mark or the four-month mark."

That means teams might get their first good look at Tagovailoa during the NFL Scouting Combine. How he performs could dramatically impact his draft stock.

While LSU's Joe Burrow is widely expected to go to the Cincinnati Bengals with the No. 1 pick, Tagovailoa could come off the board soon after. The Miami Dolphins have the fifth selection and could trade up higher if they're sold on the former Crimson Tide quarterback. The Los Angeles Chargers are right behind the Dolphins and could be looking to start fresh after parting ways with longtime quarterback Philip Rivers.

However, if neither one of those teams nabs Tagovailoa, he may tumble quite a bit. There are several teams who either have established quarterbacks or young guys who have likely earned at least another year to prove themselves (though your mileage may vary on someone like Sam Darnold).

In fact, if Tagovailoa slips outside the top five, the Dolphins may be the next best bet to grab him later in the first round. They also own the 18th and 26th picks.

Looking at last year's rookie scale, the No. 5 selection, LSU's Devin White, signed a deal worth a little more than $29.31 million. The 18th selection, NC State's Garrett Bradbury signed for about $12.88 million. And the 26th pick, Mississippi State's Montez Sweat, has a contract worth about $11.64 million.

Tagovailoa could potentially be losing out on about $16 to $18 million, depending on how his health shakes out. He may be in tip-top shape by the time the draft rolls around and get selected in the top five. Until then, it's going to be a nervous few months.