By Travis Pulver on September 9, 2015 in Articles › Sports News

That time of year is upon us. Time to start talking trash to your buddy that went to that 'other' school. Time to break out your lucky T-shirt you wore to every game back in the day. Time to tailgate and talk about the good ole' days, and how you could have been a star if you hadn't blown out your knee in high school.

Many colleges will do whatever it takes to build a winning program. To do so often means locking down a quality coach who can convince the best recruits in the land to come play for him. However, locking down such a coach does not come easy – or cheap.

10. Steve Spurrier, South Carolina Gamecocks, $4 million: The old ball coach has been at it for some time. He has yet to bring a national championship or even an SEC championship to South Carolina since he took over the team in 2005, but he has had them more competitive than ever.

9. Kirk Ferentz, Iowa Hawkeyes, $4.075 million: Ferentz has been with the Hawkeyes for a long time; since 1999. He started with a 1-10 team in '99, built it in to a top 10 contender within a few years, and has managed to keep the team competitive ever since. It's been a long time since they have been top 10 worthy, but for the most part his teams are not bad.

8. James Franklin, Penn State, $4.3 million: After losing Bill O'Brien to the NFL two years into his tenure, Penn State knew it needed to go after a good coach; one that has a history of success and recruiting. Enter Vanderbilt's James Franklin. After watching him turn around the Commodores program the Nittany Lions decided to do whatever it took to get him to move to Happy Valley.

In this case it meant paying him really, really well.

7. Les Miles, LSU, $4.3 million: If you want to unofficially lock our job for a few years you could do what Les Miles did—win a national title (2007). It has been a while since, but Miles has had the Tigers in contention each and every season. Last season was his first with fewer than 10 wins since 2009.

6. Urban Meyer, Ohio State, $4.49 million: Should Meyer continue to keep Ohio State in the national title chase his salary will soon go from top ten to top three. With the talent that he has on the roster now there are plenty of reasons to think the Buckeyes will remain in contention for the national title for years to come.

5. Charlie Strong, Texas, $5 million: Texas wanted one of the best head coaches in the land to replace Mack Brown, and to get him, they made no secret about the university's willingness to pay the price to get him. They believe they got the right guy in former Louisville head coach Charlie Strong, but if the Texas offense doesn't start producing he may find his salary disappearing real soon (like when he is fired).

4. Kevin Sumlin, Texas A&M, $5 million: When Texas A&M made the move to the SEC the school knew it needed new leadership. They took a chance in hiring an up and coming coach in Kevin Sumlin. After a top-five finish he got a massive salary bump in order to make sure he didn't bolt for the NFL.

After a top 20-finish the following season he got another bump. Now fans are hoping he earns his salary and gets the team back in the top five.

3. Bob Stoops, Oklahoma, $5.058 million: Stoops has done everything he has needed to in order to keep his job. He has won a national title and eight conference titles since taking over the Sooners in 1999. He keeps the school in contention year in and year out—something the university is willing to pay big to make sure he keeps doing it.

2. Mark Dantonio, Michigan State, $5.64 million: Dantonio would not be in the top ten let alone the top five of the university was not concerned with keeping him in town. A reworked contract from last February bumped his base up to $3.64 million. When he collected a $2 million retention bonus (after hit vested in January, 2014) his salary became $5.64 million. 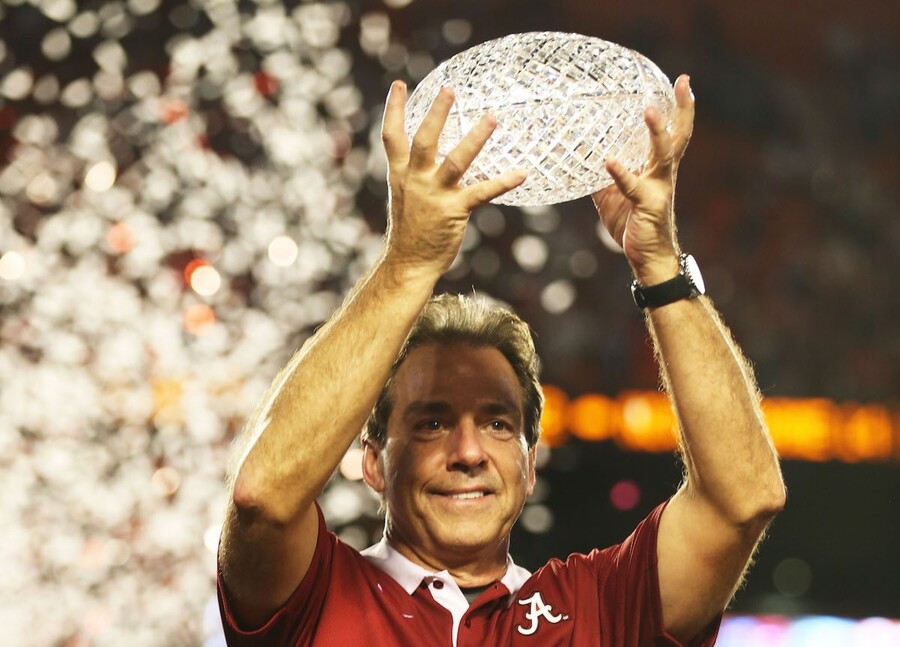 1. Nick Saban, Alabama, $7.16 million: Saban's salary does not need any explanation to anyone that follows college football. Since joining the Crimson Tide in 2007 he has guided the team to three National titles (2009, 2011, 2012), and has never finished a season with fewer than 10 wins (not counting the 2007 season). He has had only one team finish outside of the top ten.