Top 10 NFL Players Who Retired In Their 40s

Ask any football player and he will tell you that the hardest thing about the game is figuring out when to walk away. The vast majority of players have been playing since they were little kids in their local Pee Wee league. How do you stop doing something you have been doing your entire life? It's not an easy thing to do. So how do you decide when to call it a day?

Typically, Father Time will do it for them. At a certain age, athletic ability and talent begins to deteriorate and teams decide to go with younger, more athletic guys. It's the natural progression of the game.

However, that is not the case with every player. Some guys are blessed with the talent and body that can handle the ravages of time. While most guys retire at some point in their 30s, they beat Father Time back and play into their 40s.

The following is a list of the top ten players that did just that:

10. Jackie Slater (offensive tackle, St. Louis Rams; retired at 41): Offensive tackles typically only last a few years because of the punishment their bodies tend to take in the trenches, but Slater defied the odds by being one of the best in the league for 20 years (1976-95). He is tied with two other guys for having the longest stay with a single team.

9. Len Dawson (quarterback, Dallas Texans/Kansas City Chiefs; retired at 40): Dawson is the perfect example of how you can't give up on what you think is a talented player because he struggles early in his career. After five years of struggling with the Pittsburgh Steelers and Cleveland Browns he was signed by the Dallas Texans of the upstart American Football League. He went on to lead them to three AFL Championships, and a Super Bowl championship (IV).

8. Warren Moon (quarterback, Houston Oilers/ Minnesota Vikings; retired at 44): Moon is a rarity in that he actually played professionally in four different decades. He began in the Canadian League with the Edmonton Eskimos in 1978 before getting picked up by the Houston Oilers in 1984. He later joined the Vikings in 1994, played with the Seahawks for a couple years (1997-98), and was with the Kansas City Chiefs from 1999—2000.

6. Bruce Mathews (offensive tackle, Houston Oilers/Tennessee Titans; retired at 40): Mathews is widely regarded as one of the best offensive lineman to ever play the game. During his 19-year career, he was elected an NFL record 14-times to the Pro Bowl.

5. Jim Thorpe (running back, Canton Bulldogs; retired at 40): Thorpe was instrumental in putting the game of football on the map as one of the first star athletes to play the game. Before signing with the Canton Bulldogs in 1915 he was a star football and baseball player in college and was also an Olympic gold medalist.

4. Bruce Smith (defensive lineman, Buffalo Bills; retired at 40): Smith is widely considered one of the best defensive lineman to ever play the game. An 11-time Pro Bowler and two-time Defensive Player of the Year, he is the only player in the history of the game to record 200 sacks.

3. Brett Favre (quarterback, Green Bay Packers; retired at 41): Favre's best days were spent with the Packers from 1992-2007. He appeared to retire, but then decided to sign with the New York Jets in 2008. He appeared to retire again before deciding to join the Minnesota Vikings in 2009. Had he retired after the '09 season he still could have gone out on top, but he returned for the '10 season, played horribly, and missed the end of the season with an injury.

2. Johnny Unitas (quarterback, Baltimore Colts; retired at 41): 'Johnny U' personified greatness during his historic career. During his career with the Colts (1956-72) he was named to 10 Pro Bowls, was a three-time NFL MVP, three-time NFL champion, and a Super Bowl winner. 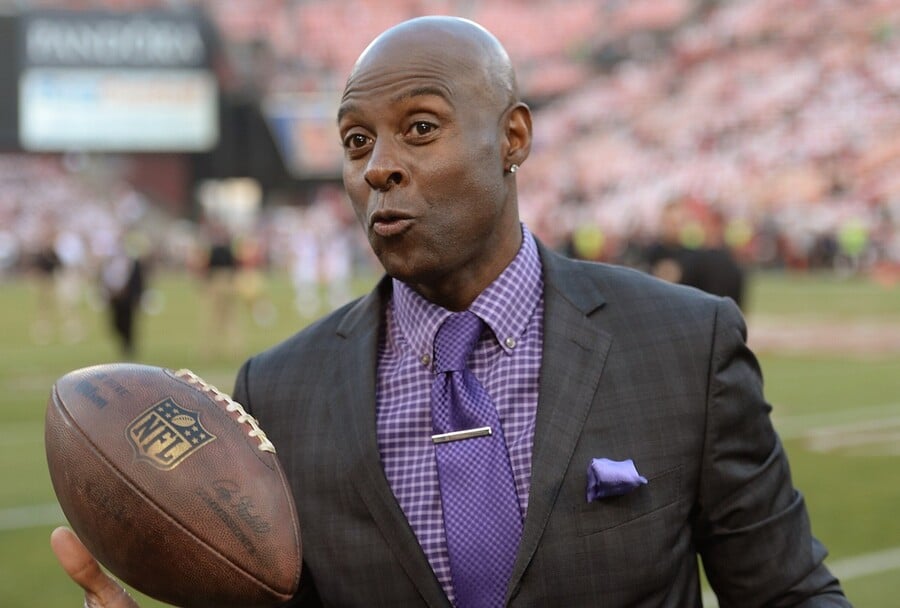 1. Jerry Rice (wide receiver, San Francisco 49ers/Oakland Raiders; retired at 42): Jerry Rice is called the GOAT (Greatest Of All Time) because that is exactly what he was. During his career with the 49ers he was a 13-time Pro Bowler and helped the team win the Super Bowl three times, and was named Super Bowl MVP once (XXIII). If there is a receiving record (regular and post season) that matters, he probably holds it, or did so at one time.