At one point in time, athletes used to be athletes and that was it. Nowadays, it seems as if before many of them become superstars in their given sport, they are trying to develop their brand. They forget that people like them because of their ability to throw a football or shoot a basketball; not because of the clothes they helped design.

Over the years, there have been a number of athletes who have failed at making the transition, but there have been many that have succeeded in making the shift from athlete to entrepreneur. Here are ten of the more successful ones:

Dave Bing (NBA; Steel/Manufacturing): After 12 seasons in the NBA with the Detroit Pistons, Washington Bullets, and Boston Celtics where he earned seven All-Star nods, Bing retired in 1978. A couple of years later, he founded Bing Steel, and five years after, that his company was partnering with General Motors and earning $40 million/year. He would later go on to become mayor of Detroit.

Oscar De La Hoya (Boxer/Musician/Promoter/Clothing): After a career that spanned 240 fights including 45 as a professional (where he went 39-6), De La Hoya retired from the ring for good in 2012, but he began many of his entrepreneurial pursuits before he hung up is gloves. He recorded a Latin Pop album that received a Grammy nomination. His clothing line debuted in 2004, and he became the first active boxer/promoter in 2002.

Eddie George (NFL; Landscape Architecture): After nine years of carrying the football in the NFL George did something uncommon among professional athletes – he put his degree to work. George got his degree in landscape architecture from Ohio State. He went on to found EDGE, a landscape design firm that has worked on such large projects as the Port Columbus International Airport. 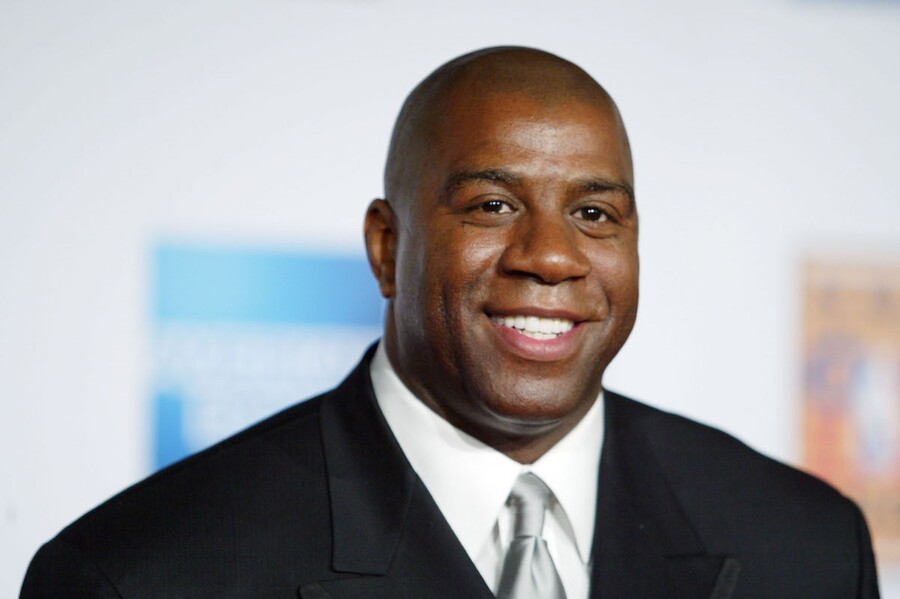 Magic Johnson (NBA; Movie Theaters, Baseball): A legend on the basketball court during his days with the Los Angeles Lakers, after retiring in 1991, he started the Magic Johnson Theaters chain in 1994, developing multiplex film centers in urban areas. Twenty years later, it is still going strong  (under management of AMC Theatres). In 2012, he joined the group that bought the Los Angeles Dodgers.

Vinnie Johnson (NBA; Automotive Supply): As an NBA player, he is known best for sinking the shot that won the Piston the 1990 Finals. He hung up his shoes a couple years later, and in 1995 he founded Piston Automotive. The company is now partnered with Ford and GM and earned $570 million in 2012.

Rick Mirer (NFL; Wine): Mirer was not very successful during his tenure in the NFL. He played well enough to make his career last 12-years, but only won 24 games along the way. His second career as a wine maker is going much better. Since founding the Mirror Wine Company in 2008, he has produced several wines that have been very popular.

Maria Sharapova (Tennis; Candy): A four-time Grand Slam winner, she may have more fans for her spread in a past Sports Illustrated swimsuit issue than anything else. She has been able to parlay her fame into a new candy line, Sugarpova. It's a sweet, gummy type candy with names like Sporty, Flirty, Splashy, and Smitten.

Roger Staubach (NFL; Real Estate): The former Dallas Cowboys great is arguably one of the best quarterbacks to ever play the game, but he happened to play during an era where the players did not make a lot of money. A Navy graduate, he used his name and fame in Texas to form the Staubach Company in 1977. After years of growth it sold for $613 million in 2008.

Venus Williams (Tennis; Interior Design): Incredibly successful on the court, she has been just as successful off the court with her interior design firm, V*Starr. Formed in 2002 to serve residential and commercial clients, the company serves high-end homeowners, office buildings, hotels, and many other businesses. She is also a part owner of the Miami Dolphins.

George Foreman (Boxer/Portable Grills): Foreman has fought in some of the most memorable fights in boxing history, but to the general public, is probably more known for the George Foreman Grill. It came out back in the mid-1980s, and since then has sold over 100 million units. From the grills, he has made approximately $200 million ($137 million for the naming rights in 1999; prior to that he made 40 percent a grill which equated to $4.5 million a month at the height of sales).