Tom Brady Is Already Planning For Life After The NFL

Fresh off of his fifth Super Bowl championship and fourth Super Bowl MVP, Tom Brady is keeping mum on his potential business plans once he finally hangs his cleats up. Fortunately, filings made to the U.S. Patent & Trademark Office by his representation give us a hint: he's looking to dominate the health, nutrition, and physical fitness space.

Yee & Dubin Sports has filed for 23 trademarks over the past seven months, with 22 attached to products and services for Brady's TB12 brand and the other for "Sustained Peak Performance," the motto of his TB12 Center.

Brady's website has started selling items related to these trademarks, as well. The most publicized is probably the Under Armour performance sleepwear, which made waves this year when Brady announced that he himself wore it during this past season. A top and bottom set retails for $200. 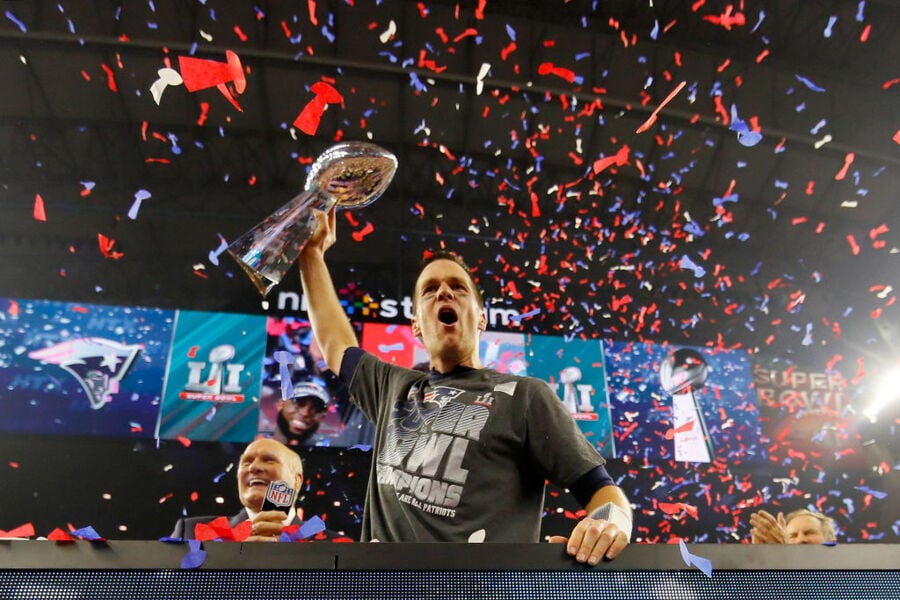 It's safe to say that Tom Brady is one of the best, if not the greatest, quarterback ever to play the game. His TB12 Sports Therapy Center, located right by Gillette Stadium, is based on the idea that if you can't quite be Tom Brady, at least you can train like him. For $250, customers receive a 90-minute evaluation and receive customized therapy/body work as well as analysis of their food diaries. An additional $200 per session gets customers a body coach.

If all this sounds expensive, it's because it is. Naturally, Brady is able to charge a premium because he can capitalize on his brand name among fans. He's the best quarterback in football right now, after all.

But will the goodwill last once Brady decides to retire? His protein powder retails for $54. BiPro, the creator of Brady's powder, sells its own brand for $36 a pound. Brady's cookbook, which he dubs his nutrition manual, goes for $200. It's sold out on several occasions, but it could be a case of limited supply since the quantities of Brady's products have never been shared.

People Brady works with have some questionable track records, as well. Alex Guerrero, the head honcho behind Brady's training and performance center, has had two products come under scrutiny by the Federal Trade Commission. Allan Campbell, Brady's personal chef, has made some claims that have been debunked. Campbell says Brady doesn't consume a laundry list of items, ranging from white sugar to any kind of fruit.

Aside from taking his TB12 Sports Therapy Center to markets outside the greater Boston area, Brady's best bet at an enduring stream of income once he retires may be pliability. It's a method Brady and Guerrero use to keep muscles "long and soft." Brady's goal: to get insurance companies to pay for it as if it were physical therapy.

Super Bowl performances like the one Brady had in his historic comeback earlier this month add to his legacy, especially in the northeast. Will it lead to a huge amount of cash once he retires, though? Only time will tell.