Tight Ends Are Getting Paid – And Rob Gronkowski Wishes He Was One Of Them!

New England Patriots tight end Rob Gronkowski has been the premier player at his position, pretty much since he entered the league in 2010. He has redefined how teams see and use tight ends. Should he ever hit free agency, every team in the NFL would be willing to offer him Scrooge McDuck's vault to sign with them.

He knows this, but since the Patriots were smart enough to extend him before he really exploded, Gronkowski is forced to sit back and watch, as teams sign lesser players to huge deals – and he doesn't like it.

On the day it was announced the Patriots were picking up the option on his contract, Gronkowski sent a tweet expressing his feelings about it. He referred to it as taking a pay cut over the next four seasons. His salary didn't go down, and in fact, he actually picked up an additional $6 million (what he was owed for the $10 million option).

It was a smart move by the Patriots. In picking up his option, they locked up the most dangerous tight end in the NFL through the 2019 season. They didn't actually cut his pay, of course, but by locking him up, they keep him from testing the free agency market until he's 31. Considering the way less accomplished tight ends have been cashing in, a guy with his talent could make some serious money in today's market. 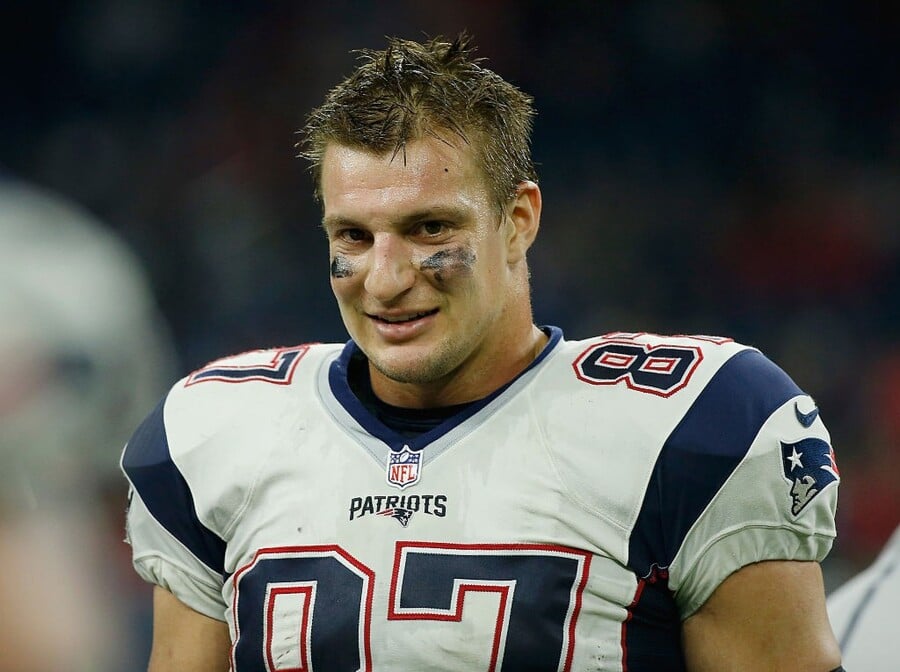 Zach Ertz was one of the first to cash in, with a five-year, $42.5 million extension with the Philadelphia Eagles. A few days later, the Kansas City Chiefs made Travis Kelce a happy man with a five-year, $46.8 million extension. A couple of days prior to free agency opening, the Indianapolis Colts surprised the football-loving world by signing Dwayne Allen to a four-year, $29.4 million deal. Allen should see more action with the Colts now that Coby Fleener has signed a five-year, $36 million deal with the New Orleans Saints.

All four players will be among the highest paid tight ends in the NFL next season (when you factor in bonuses), even though not one has yet to produce a single 1,000-yard season.

Gronkowski has outperformed all three of the others, individually and combined. Last season, he was one of the best offensive players in the NFL (12th in receiving yards; 10th in touchdowns). His value is definitely higher than all three, yet he is going to be paid just a few million more than they are over the next four seasons.

Since his option has been picked up, Gronkowski is going to make a base salary of $2.25 million (plus the $6 million from the option), $4.25 million, $8 million, and $9 million. Add in his roster and workout bonuses, and he will make just under $33 million.

Rob Gronkowski should clearly be making significantly more than Zach Ertz, Travis Kelce, and Dwayne Allen. He knows that, and the Patriots have to know that as well. Whether they intend on correcting that injustice remains to be seen. They certainly do not have to, since Gronkowski is under contract. It would be a nice gesture to their most valuable offensive weapon (next to Tom Brady), however.

What if the Patriots didn't pick up his option? What if he was hitting free agency? How much could he get?

Factor in the premium being put on big, pass-catching tight ends and how much desperate teams will be willing to overpay for a player of his caliber, and it would not be shocking to see him get offered a five-year, $60 million deal – if he was going to become a free agent, that is.