Earlier this year, the PGA Tour had to contend with LIV Golf, the new Saudi-backed golf league. About 50 players jumped from the PGA to LIV, despite warnings of repercussions from the PGA's end. While the money for the tournament comes from the highly controversial Public Investment Fund of Saudi Arabia, the allure of less-intense tournaments, larger prizes for all finishers, and enormous contracts certainly don't hurt LIV's case. And as the league expands to more events next year, we very well could see additional players join.

Now, there's ANOTHER golf league on the horizon — but this one isn't aiming to compete with the PGA Tour.

Tiger Woods and Rory McIlory announced the formation of their company, TMRW Sports, during August's Tour Championship. Now, the duo has given us more intel into its new TGL league. Starting in January 2024, players will compete on six three-man teams across 15 weeks, which includes regular-season matches and a playoff. Unlike the PGA Tour and LIV Golf events, everything in the TGL will be virtual. The matches will feature a simulator for longer shots, while an authentic green area will be the home for putting and chipping. 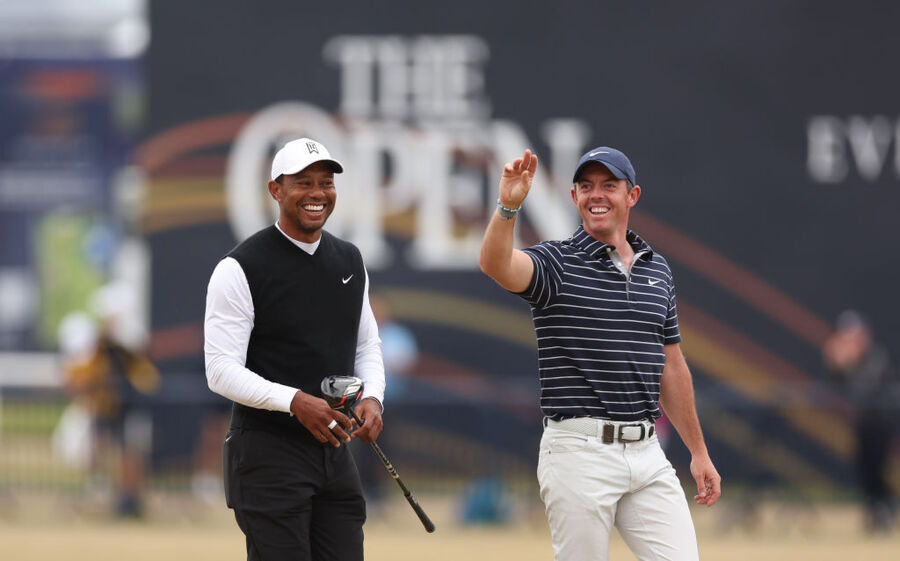 Woods and McIlroy's company has also assembled an impressive "who's who" list of investors across the sports world. Steph Curry, Serena Williams, Alex Morgan, Shohei Ohtani, Sidney Crosby, and Lewis Hamilton are among the biggest names, though they're hardly the only ones getting a piece of the new company.

NBA players Chris Paul, Jayson Tatum, and Andre Iguodala have invested. So have NFL quarterbacks Josh Allen and Tony Romo. MLB player Trea Turner is in the mix, and Grand Slam champion Andy Murray is, too.

Even non-professional athletes, such as Justin Timberlake and Atlanta Falcons owner Arthur Blank, have invested in TMRW Sports. It's unclear how any of the stakes are divided, though the intersection of sports and tech has long been a staple of many portfolios. And with the star power of both Woods and McIlroy, the company could offer a nice payout for everyone involved.

McIlroy shared that Woods will compete in TGL matches. It's a way for him to continue playing competitively as he recovers from a February 2021 car wreck. Woods has only appeared in three events since suffering those injuries.

A virtual showcase could give him both a mental and physical boost to get back out on the full links. At the very least, it's got to be a nice feeling knowing so many stars believe in your product more than a year before it launches.