Almost Three Years Ago, He Washed Up In Lebanon, Now He's A Top NBA Free Agent Prospect – How Did Hassan Whiteside Do It?

Hassan Whiteside's professional basketball career has been a turbulent ride. Just two and a half years ago, he was nobody, trying to make ends meet playing for Al Mouttahed Tripoli, a Lebanese basketball club. Now, he's one of the top free agent prospects on the NBA market, looking to make upwards of $22 million this season.

How in the world did that happen?

It all seemed to begin well. After one good collegiate season with the Marshall Thundering Herd, he went higher than anticipated in the 2010 NBA Draft, becoming the 33rd overall pick to the Sacramento Kings. Unfortunately, he couldn't quite perform up to the required standard.

At the end of November in the same year, he was relegated to the NBA Developmental League affiliate, the Reno Bighorns. This began a roller coaster of movement among various D-League teams, and a couple of brief stints back on the Kings roster. By the end of his rookie year, the $1.76 million he got from the Kings had only resulted in an appearance in one NBA game.

In 2012, he went overseas to play in Lebanon. Over the next two years, he suited up for multiple squads in both Lebanon and China, posting respectable numbers, but not performing well enough to garner NBA attention.

By September 2014, he was back in limbo between the NBA and the D-League, having been acquired by the Memphis Grizzlies. In November, he was signed by the Miami Heat.

This time, he came to play. 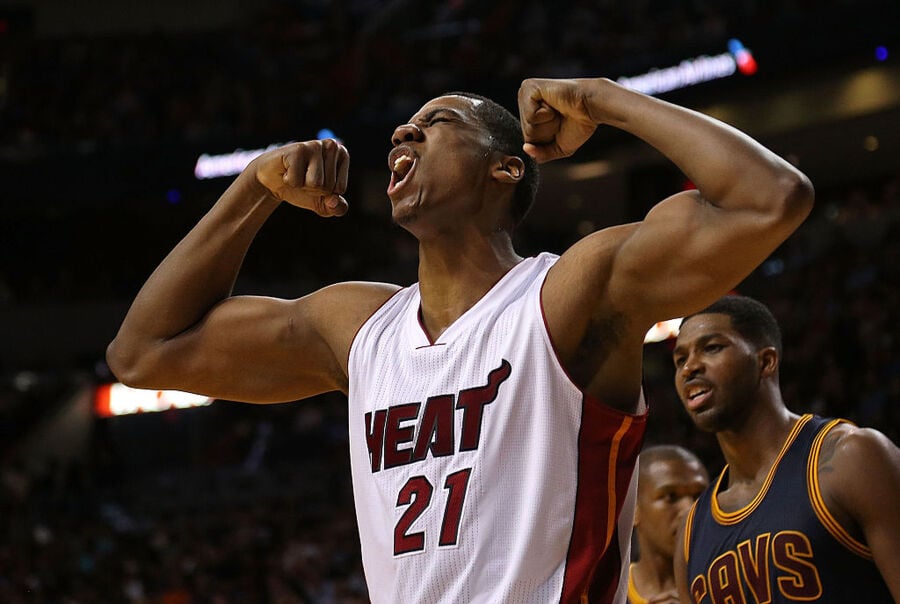 In late January of 2015, just one month after being recalled yet again from the D-league, Whiteside came off the bench for the Heat against the Chicago Bulls and stunned the world by recording 14 points, 13 rebounds, and 12 blocks in just 25 minutes of playing time. That was the fastest triple-double in NBA history with blocks, and a team record for blocks in a game.

Whiteside informed ESPN that not long before that historic game that altered his career path forever, he had been working out at a local YMCA, unable to get through to any NBA teams to get another shot. He had also turned down contract offers in China in effort to work his way back into the NBA.

Fast forward to the 2015-16 NBA season. Whiteside started in 43 games for the Heat, establishing himself as a dominant presence in the paint. He averaged a double-double with points and rebounds, and led the league with 3.7 blocks per game. He also started ten games in the playoffs, leading the heat into the second round only to succumb to a minor knee injury and miss the last three games of the series. Without him, the Heat lost in seven games to the Toronto Raptors.

Now he's a free agent, and if it weren't for the future Hall-of-Famer Kevin Durant being on the open market, Whiteside might be the top free agent prospect in the league. He's getting attention from the likes of the Heat, Lakers, Warriors, and many more. Here's what he told ESPN about it:

"I find it flattering, because in my past, I was trying to call those teams, and now it's the other way around. It's a flattering experience, and I'm thankful for this opportunity."

The first day that teams can begin to make deals with free agents is July 1, and Whiteside hopes to have a contract that day. It's expected that the Heat will offer him the most money of anyone, as they have the potential to propose a $98 million contract. The 27 year old center isn't necessarily set on taking the highest bid, though. He says there are other factors in play.

"It's a toss-up. It's a lot of things that come into it. It's not one specific thing. It's like having a wife. You can't say one specific thing you like about her. You have to like her as a whole. I have to choose it all together, so all of the dots have to connect."

No matter what happens, two things are certain:

Whoever gets him is sure to score big with this guy. He's proven not only that he can overcome adversity with a kick-butt work ethic and a lot of determination, but also that he's a bona fide beast in the paint. Keep an eye on this guy.