Many athletes have earned life-changing money through playing their sport. Earning eight- and nine-figure contracts can set a player up for life, with plenty left over for their kids and grandkids.

But there's a rare breed of athlete who made a lot of money on the court or field—and then multiplied it with smart business investments, endorsement deals, and other partnerships. Those athletes are the ones who have taken "set for life" money into "jaw-dropping, smack yourself on the forehead in awe" money.

Here are seven athletes who have hit a billion dollars in earnings. And they're not done yet.

Note: These numbers are the actual amount of money the players have earned over the course of their careers from salary, sponsorships, and other payments. They're not adjusted for inflation. (Earnings courtesy of Sportico's Lev Akabas)

Michael Jordan is the only athlete ever to have made more than $2 billion. His NBA salary was only $93.285 million in actual money, with about two-thirds of that coming in his final two seasons with the Chicago Bulls. Yet Jordan has built an impressive business empire thanks to shrewd investments. His Jordan Brand apparel line sells billions of dollars worth of shoes every year, and Jordan earns about $130 million per year from footwear. He's also signed massive sponsorship deals with companies like Nike (which has paid him more than $1 billion over four decades), Hanes, and Wheaties.

Tiger Woods is among the most successful golfers of all time. He's won 82 PGA Tour events (tied for first), 15 men's major championships (second all-time), and has achieved several individual records within the sport. However, he's come to terms with the fact he will never be as dominant as he once was. In fact, due to a car accident in February 2021, Woods missed an entire golf season and admitted he may only play events here and there moving forward. He's a few majors behind Jack Nicklaus, so he'll try and sneak a few more of those in while he still can. Woods continues to have major endorsement partnerships with companies like Nike and EA Sports, and his mere presence in PGA earns him millions of dollars. 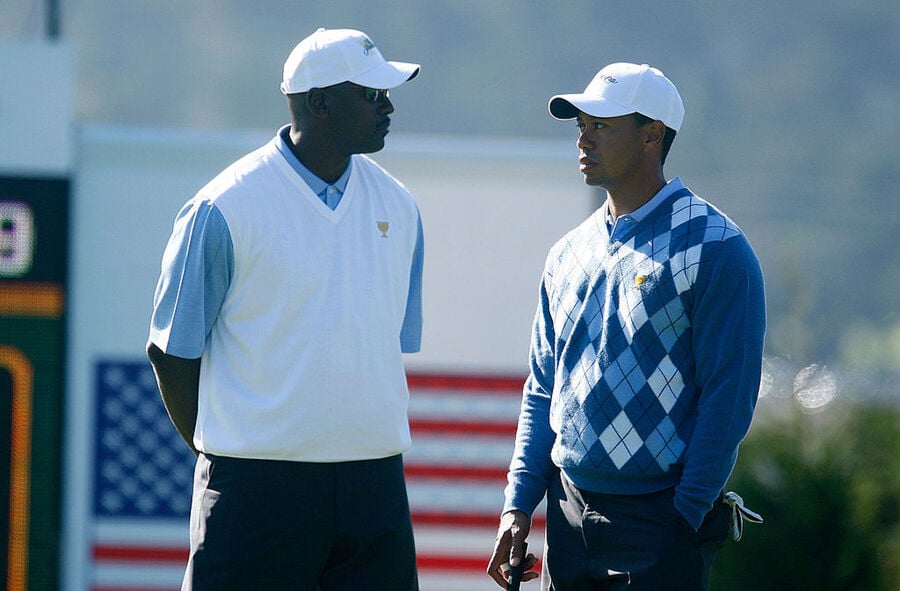 Ronaldo has been a consistently strong presence on the soccer pitch, winning five Ballon d'Or awards and holding records for most appearances, goals, and assists in Champions League play. He's had endorsement deals with some major companies, including Nike, Armani, Tag Heuer, Herbalife, Clear, Castrol, PokerStars, and more. His good looks and charm have also helped make him the face of fashion lines and colognes, and he's featured in his own mobile app, Heads Up!

Floyd Mayweather and Cristiano Ronaldo were the two highest-earning athletes of the past decade. Though he's participated in a couple of exhibition matches, Mayweather's last official fight occurred in 2017, when he defeated Conor McGregor to reach a perfect 50-0 record (with 27 knockout victories). Mayweather reportedly took home more than $300 million for that fight. Since his latest retirement, he's turned his sights toward building his real estate portfolio. He owns pieces of nine skyscrapers, including the tallest building in New York City.

Though Michael Jordan has made about double the money LeBron James has, James is the first NBA player—and the first player from one of the major four sports—to reach the $1 billion mark while he was still playing. James will likely make more than $400 million in NBA salary before he hangs his sneakers up, but his business acumen is even more impressive. He signed a lifetime deal with Nike in 2016 that brings in about $30 million every year. His endorsements with AT&T, Beats, Walmart, Blaze Pizza, GMC, and PepsiCo add another $100 million annually. And his investments in his SpringHill media company and Manchester United certainly don't hurt, either.

Lionel Messi has reached billionaire status thanks to some very friendly contract terms throughout his career. He's currently on a two-year contract with PSG worth $41 million annually, with an option for a third year. That contract pales in comparison with Messi's FC Barcelona deal, though. When the club renewed his contract in 2017, they dished out money never before seen in any sport: he reportedly made a shade under $674 million in four seasons. That's about $168.5 million per year! On top of that, FC Barcelona also gave Messi a renewal fee of about $140 million simply for signing the new contract, plus a loyalty bonus of $94.6 million. On the field, Messi has won six Ballon d'Or awards. Off of it, he's appeared on four FIFA video game covers and has had multi-year deals with several big-name companies, including Adidas and PepsiCo.

Much like Michael Jordan, Roger Federer has made most of his earnings off the tennis court. He's certainly among tennis's best ever; he's been ATP's number one tennis player in the world for a total of about six years during the course of his career, winning more than 100 events, including 20 men's singles Grand Slam titles along the way. But all of that success has amounted to $130 million, a modest portion of his full total earnings. To supplement that, Federer has made an impressive amount of moves off the court. Federer has partnered with Credit Suisse, Mercedes-Benz, Rolex, and Wilson for more than a decade. More recently, he swapped out Nike for Japanese company Uniqlo, signing a ten-year, $300 million deal. Because Uniqlo doesn't make shoes, Federer was able to invest in shoe company On, whose latest valuation was for $5 billion.

And there you have it! The seven athletes who have made $1 billion in actual money over the course of their careers (and in some cases, into retirement). What an impressive group!

If you adjust for inflation, this list balloons to 12 people. Three of them are golfers: Arnold Palmer ($1.5 billion in earnings after adjusting for inflation), Jack Nicklaus ($1.38 billion), and Phil Mickelson ($1.08 billion). Palmer has died, and Nicklaus is all but retired, so billionaire status may be out of reach. However, Mickelson is about $115 million in actual dollars shy of actual career earnings. He's in his 50s, so he may not have a ton of quality starts yet—but he might be able to hit the $1 billion earnings mark someday.

Racer Michael Schumacher ($1.13 billion) and David Beckham ($1.05 billion) have also both made over $1 billion when adjusted for inflation. Schumacher has stayed out of the public eye since a skiing accident in 2013, while Beckham and his wife Victoria continue to be strong players in the fashion and lifestyle scenes.