These Are The Top 10 Most Valuable NBA Franchises

The NBA has never been more popular. The game is beloved universally, even if the occasional comment gets the league in hot water overseas (ask Rockets GM Daryl Morey about that one). As a result, the average worth of an NBA franchise has risen exponentially, as seen in the annual Forbes franchise valuation list.

Even the least valuable team – the Memphis Grizzlies, if you're scoring at home – is worth $1.2 billion. That's not a bad chunk of change. But it pales in comparison to the ten most valuable squads. And once again, the team at the top of this list proves that winning isn't everything.

The Knicks haven't had a winning record or made the playoffs since the 2012-13 season, but that hasn't stopped them from being the most valuable franchise in the league. Owned by the Madison Square Garden Company, the Knicks play in arguably the most prestigious arena in the league in the country's largest city. That adds up to a lot of value, even if the product on the court isn't great.

It helps that the Lakers signed LeBron James in 2018 and scored Anthony Davis this offseason, but they're still routinely among the NBA's most valuable teams. They play in a major city and seeing several celebrities courtside every game doesn't hurt, either. The Lakers' storied history has also been a boon to their success, but even with their struggles the past several seasons, they're still in great shape.

No team has risen in value faster than the Warriors. Their 13 percent jump last year seems modest compared to their growth since Joe Lacob and Peter Guber purchased the franchise in 2010. Back then, the Warriors were worth $450 million. But thanks to a likable team primarily grown through the draft – plus three championships in the past five years – the Warriors have jumped tremendously. The new San Francisco-based stadium they unveiled this year will boost that growth even more, even if the team is not as strong as they have been in previous iterations.

The Chicago Bulls last won a championship in 1998, when Michael Jordan, Scottie Pippen, Dennis Rodman, Phil Jackson and company led the team to their sixth title in eight years. Since then, it's been several disappointing seasons sprinkled in with a handful of perennial playoff teams that typically have lost in the first or second round. But Chicagoans always pack the United Center, remaining fiercely loyal to their team through thick and thin. That loyalty makes the Bulls a mainstay in the top NBA franchises. 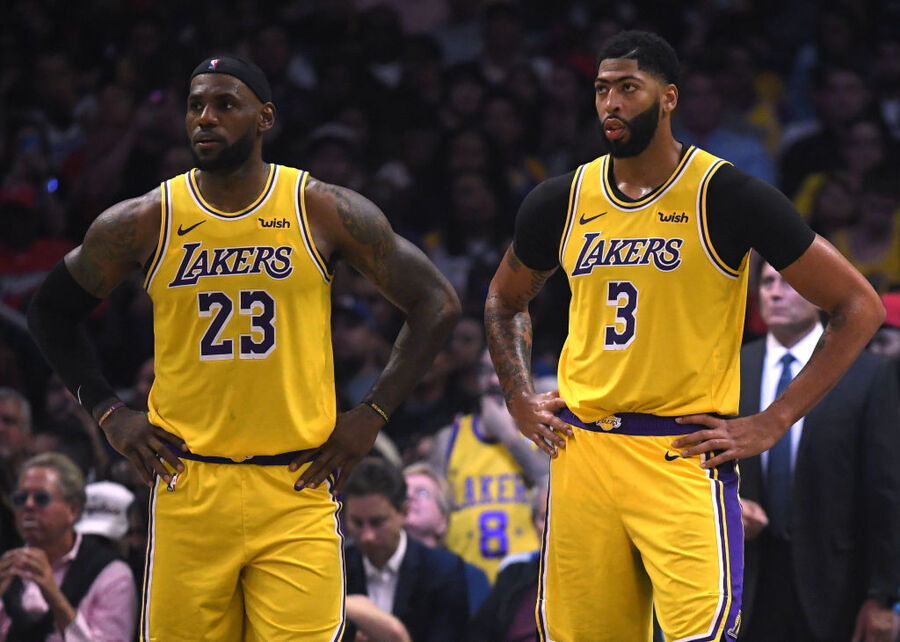 The duo of LeBron James and Anthony Davis helps make the Lakers one of the most valuable franchises in the NBA. (Harry How/Getty Images)

The Celtics are the most decorated team in NBA history, and that's helped make them one of the most valuable franchises in the league. With several young, exciting players on the roster like Jaylen Brown and Jayson Tatum, the Celtics look like they'll be strong contenders in the Eastern Conference for the next several years.

The Nets only rose 2 percent in value from 2018, but expect that growth to increase exponentially next year. That's when Kevin Durant will be back in the lineup. Paired with Kyrie Irving and DeAndre Jordan, he could help bring the Nets its first-ever NBA championship. And that would bring a ton of value to the franchise.

Home to perhaps the NBA's most iconic player – even if you don't like James Harden, his beard is one of the league's instantly recognizable brands – the Rockets also gained great value internationally when they drafted Yao Ming. The center has long since retired, but the Rockets are still benefitting. Can they finally get over the hump this year and bring Houston its first NBA title since 1995? If they do, they'll likely be even higher on this list next year.

Led by international stars Luka Doncic and Kristaps Porzingis, the Mavericks' 18 percent growth is higher than any other team on the list. They haven't missed a beat in the wake of Dirk Nowtizki's retirement. Billionaire owner Mark Cuban helps the team gain value, too. His appearances on Shark Tank keep the Mavericks in people's minds, even if they're not NBA fans.

Do you think Steve Ballmer is miffed by his return on investment? He purchased the Clippers for $2 billion in 2014, and they've grown just 10 percent in the five years since. Of course, 10 percent of $2 billion is still $200 million, so don't feel too bad for Ballmer. Perhaps an even more amazing fact: the Clippers have never even made it to the Conference Finals, let alone the NBA Finals. But with reigning NBA Finals MVP Kawhi Leonard and regular All-Star Paul George now on the roster, the Clippers could have their most successful season in franchise history. And that'll make Ballmer the happiest of all.

The Heat have seen their fair share of success over the past decade. The trio of LeBron James, Dwyane Wade, and Chris Bosh reached four consecutive NBA Finals from 2011 to 2014, winning two of them. The team has continued to rise in value since then, though at just a three-percent increase from 2018, that growth has slowed a bit. With Jimmy Butler now the face of the franchise, the Heat will look to rekindle some of their previous postseason success.