These Are The Ten Most Valuable NFL Teams

NFL owners are part of an exclusive club. There are only 32 teams in the league, so already supply is incredibly limited. And despite numerous issues both on and off the field, football has never been as popular as it is right now. That means owning an NFL team is quite valuable.

Even the league's least valuable team, the Buffalo Bills, are worth $1.9 billion. Yep, the bottom of the barrel in the NFL is still quite lucrative. But we're here to talk about the most successful teams, per Forbes's annual NFL valuations. Here are the ten most valuable NFL teams. And as the top team indicates, you don't need recent prolonged success on the football field to make lots of money.

Perhaps it's no surprise that "America's Team" finds itself at the top of this list. Led by outspoken owner Jerry Jones, the Cowboys are worth nearly $1.5 billion more than the second most valuable team. That's thanks to a fanbase spread throughout the world, an easily identifiable brand, and plenty of boisterous personalities. The team's value raised by 10 percent this year, and they brought in $420 million in operating income.

The Cowboys haven't made it out of the divisional round since 1995. Meanwhile, the Patriots have made 10 Super Bowls in that same timeframe, winning six of them. The Tom Brady/Bill Belichick duo has been the strongest player and coach combination over the past two decades – and maybe even across the 100 years of the NFL. In a limited sample size this season, the Patriots look incredibly impressive and have about a six percent chance of going undefeated. The Patriots' sustained success (aided by long-time owner Robert Kraft) has made them one of the most valuable franchises in the league.

Over the past dozen years, the Giants proved to be the Patriots kryptonite. With Eli Manning at quarterback, the Giants knocked off the Patriots in the Super Bowl in both 2007 and 2011. The first Super Bowl win was the Patriots' only loss that whole season. Times have been tougher for the Giants lately, and Eli Manning was just benched in favor of rookie Daniel Jones. If Jones can turn the franchise's fortunes around, we just may see their value rise. Even if he struggles, the Giants are still a valuable franchise. Their one-year increase of 18 percent is tied for fourth among all NFL teams. 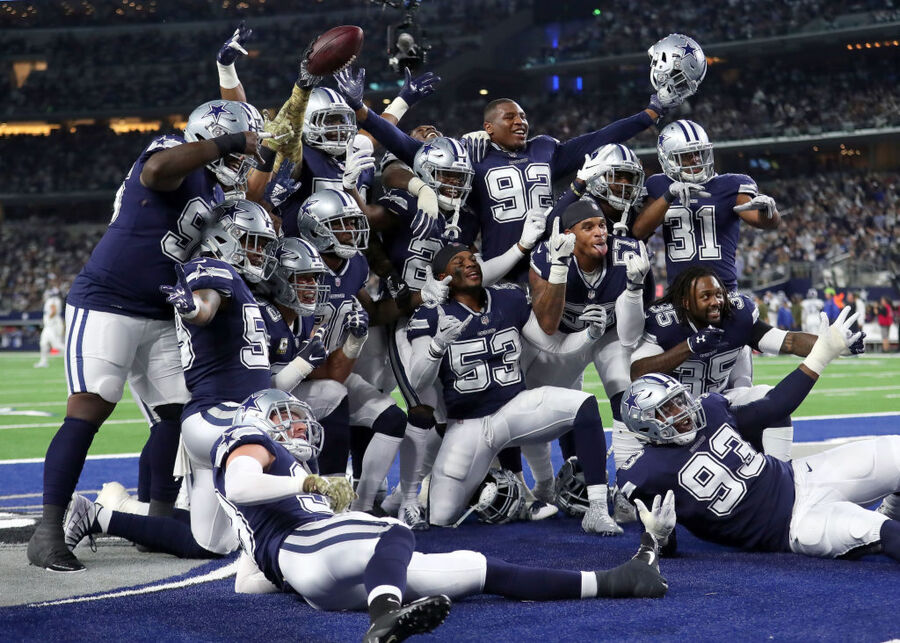 A team that had an even better year than the Giants? The Rams. Obviously, making the Super Bowl is preferable to missing the playoffs entirely, and that probably helped the Rams rise 19 percent in value over the past year. With a freshly extended young quarterback in Jared Goff and perhaps the hottest coach in the league in Sean McVay, the Rams are among the NFC favorites to return to the Super Bowl.

From 2011 to 2013, the 49ers reached the NFC Championship three straight seasons, including a Super Bowl appearance in 2012. Since then, the team hasn't posted a winning season. But there's reason for excitement in the Bay. The Niners have a healthy quarterback in Jimmy Garoppolo and some exciting weapons surrounding him. They could be a surprise team in the NFC West. But like the Cowboys, even if they struggle, the franchise's history is so strong that their value should continue to solidly rise.

Owned by the McCaskey family – led by 96-year-old Virginia McCaskey – the Bears are one of just two teams remaining from the NFL's founding in 1920. Their operating income of $62 million this past season is the lowest of the top ten most valuable teams, though they grew 19 percent in value, tied for second among all NFL franchises. Being as old as the NFL certainly has its benefits. The Bears have one of the top defenses in the NFL, a stark contrast to the high-octane offenses throughout the league.

The franchise with the most controversial name is also among the most valuable. Owner Daniel Snyder purchased the team in 1999 when he was just 34 years old. Now 54, Snyder is still one of the young bucks among owners, only older than Kansas City's Clark Hunt. Playing in the nation's capital certainly doesn't hurt, either. Washington hasn't won a playoff game since 2005, but they're in the league's most valuable division (the NFC East, by this list, at least). That affords them plenty of primetime and big moment opportunities – and a lot of extra value.

Both New York teams make this list. As the United States's largest city, it's really not surprising. Simply by being in that huge market, the Jets are going to have tremendous value. They haven't won the AFC East since 2002. Though to be fair, the other non-Patriots teams in the division haven't fared much better. Starting quarterback Sam Darnold came down with a case of mono and will miss several weeks. That likely won't hurt the Jets' value too much, but it is worth keeping an eye on.

The NFL's newest franchise is already among the top ten most valuable. This comes with just three playoff wins in 17 seasons. The 2019 season is the Texans' first under new ownership. Former owner Bob McNair died in 2018, so the team is run largely by his wife Janice and his son, D. Cal McNair. With marketable stars like J. J. Watt and DeShaun Watson, the Texans are a team on the rise.

The City of Brotherly Love also has a pretty valuable NFL team. The Eagles won the Super Bowl two seasons ago and are a popular pick to return this year. That largely depends on the success (and health) of quarterback Carson Wentz. But with a stout defense and playmakers around him, the Eagles look poised for success. And that might help them be even higher up on this list next season.