Five years ago, the Washington Wizards backcourt duo of John Wall and Bradley Beal was one of the most exciting young tandems in the NBA. Wall was perhaps the fastest player in the entire league, with a first step that any young point guard should aspire to obtain. And Beal was an elite shooter, both coming around screens and off the dribble.

The Wizards were so in love with this pair that they invested $128 million in Beal in 2016 and $170 million into Wall with a supermax deal in 2017. But things quickly went south.

Wall played in only 73 games over the next two seasons, hampered by injuries. Around the holidays during the 2018-19 season, he suffered a heel injury that would put him out for the rest of the season. Wall then ruptured his Achilles during a fall in his home, which would sideline him for a minimum of 12 months.

It also ultimately ended Wall's Washington career. That contract Wall signed back in 2017? It didn't actually start until 2019. That meant all of Wall's $170 million still had to be paid—and he wasn't playing a single game for the Wizards. 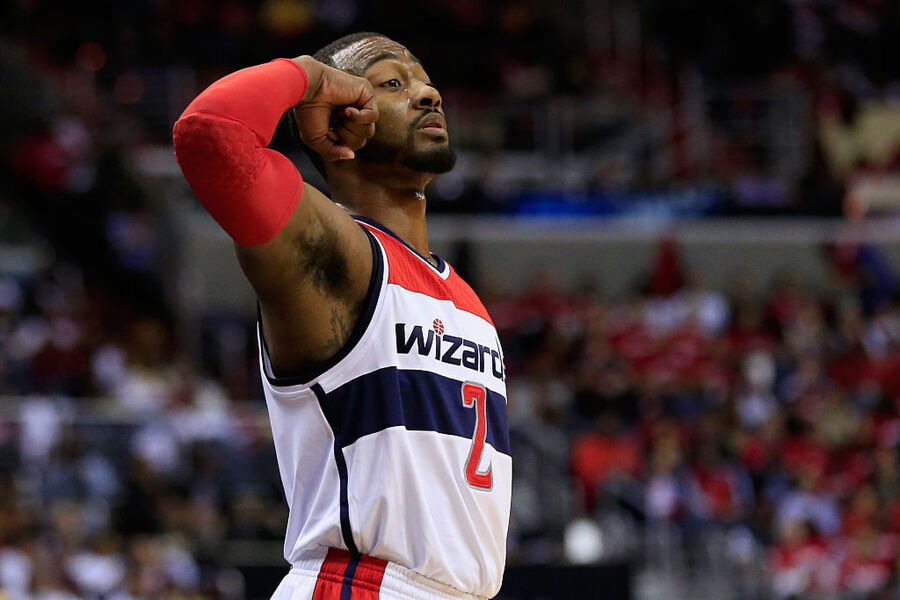 Wall missed the remainder of the 2018-19 season and all of the 2019-20 season. But while the NBA was continuing on—and later, adjusting to life in the NBA Bubble during the COVID-19 pandemic—the Wizards were working hard behind the scenes, trying to find a suitor for the league's worst contract.

Luckily, they found a team willing to make a deal during the summer of 2020: the Houston Rockets, who were looking to get rid of one of their own disgruntled stars. The Rockets sent Russell Westbrook to the Wizards in exchange for Wall and a draft pick.

Westbrook was on a similarly hefty deal; he had signed a five-year extension in 2017 (that kicked in the following year) for $205 million over five years. When the Rockets traded him, he still had three years and about $132 million remaining on the deal.

Westbrook brought a new attitude and fighting spirit to a Wizards team that had sorely been lacking an identity. He averaged a triple-double and the Wizards reached the playoffs last year, their first time doing so since the 2017-18 season.

While Westbrook was a solid piece for the roster, the Wizards wanted to prioritize depth. And so, after just one season, the Wizards traded Westbrook to the Los Angeles Lakers in a five-team deal. In return, the Wizards received six players, including Kentavious Caldwell-Pope, Kyle Kuzma, Montrezl Harrell, and Spencer Dinwiddie.

In just two years, the Rockets manage to rid themselves of two of the league's most burdensome contracts. The added depth has paid off, too—a quarter of the way into the season, Washington has been one of the league's best surprises and finds itself in the thick of the playoff race.

Wall, meanwhile, played 40 games for Houston during the 2020-21 season, finishing with fairly good numbers, though he did record the fewest minutes per game and worst field goal percentage of his career. At the start of the 2021-22 season, the Rockets and Wall mutually agreed to sit him out so they could prioritize the development of younger players.

But the Rockets are still paying Wall $44 million this season, even though he likely won't step on the court at all. And next year, he has a player option for $47 million, which could mean he'll make that $170 million after playing in only 40 games over four years. Not a bad deal at all.

It's been a wild ride for Wall and the Wizards. After moving on from each other, both have something to smile about.