Despite Making Millions, The Washington Redskins Players Are Surprisingly Frugal

At the start of the year, nobody predicted that the Washington Redskins would win much of anything. In 2014, the team won four games, and there was still a big media circus surrounding Robert Griffin III and owner Daniel Snyder. Factor in the ever-changing controversy over the team name, and it was easy to expect a similar disappointing finish this year.

Instead, Kirk Cousins and Co. are rolling into the playoffs, going from worst to first in the NFC East. In fact, since Cousins' infamous "You like that?!" comeback against the Tampa Bay Buccaneers, he's thrown 23 touchdown passes and just three interceptions.

While winning may be new to the team this year, there's something the roster is no stranger to: saving money. That's right, the Redskins are the most frugal team in the entire league, and Cousins is leading the charge, rolling to work in a dented, beat up 2000 GMC Savana passenger van to work.

He's been practicing frugal spending since he was in college at Michigan State. The quarterback worked a minimum wage job picking up golf balls, and began thrifty spending to save a little extra dough. 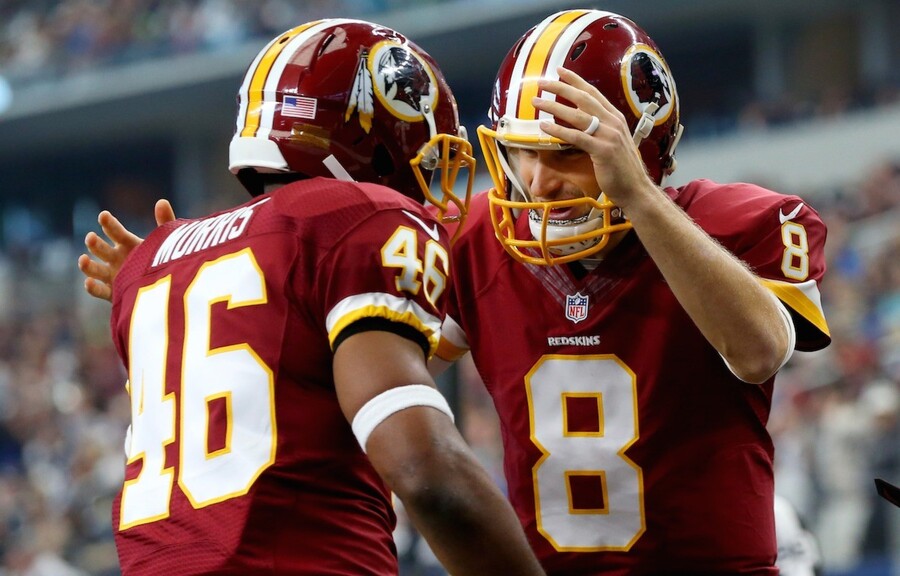 He's not alone: two-time Pro Bowler, Alfred Morris, who earns $1.5 million a year, rides a bike to work and parks it in the practice facility. If it gets too cold in D.C., Morris upgrades to his "Bentley," a 1991 Mazda 626, a car he drove up from Florida as a rookie.

And Ryan Kerrigan, making good money ($57.5 million over five years), doesn't believe in flashy rides or homes, either. He still lives in an apartment in Virginia, and shares it with a roommate.

Cousins' knack for saving didn't change once he left college. During his first year in the league, he and offensive lineman Tom Compton, then also a rookie, took a garage-full of unwanted furniture from a teammate. Rather than hiring movers, Cousins and Compton moved the furniture themselves. Anyone who's ever tried to do that just winced in pain–it's no walk in the park.

The pair moved into a "low rent" two-bedroom apartment, though they upgraded to a three-bedroom pad for the following two years. Cousins did admit he'd get fancy and hire movers if he was doing everything over again. Hey, he's only human.

Kerrigan might be even more impressive for his thriftiness. He's lived in a few different houses with Andrew Walker, his childhood friend and managing editor of the Redskins website. The two deemed a townhouse as "too big," and have mostly stuck to modest surroundings. Their current spot is perfect, because according to Walker, it's within walking distance of Potbelly and Chipotle–the two splurges Kerrigan allows himself. Normally he cooks meals at home, which is a great way to save money.

The pass rusher doesn't own a fancy ride, either. He bought a Chevy Tahoe back in 2011, his rookie year; compared to Morris' rickety Mazda and Cousins' passenger van, Kerrigan looks like he's straight-up rollin'.

In fact, it's Cousins' van that might epitomize his frugal spending best. It belonged to his grandparents, and he originally took it for sentimental reasons. But he soon grew fond of its practicality. At 6'3″, Cousins isn't really a short man. The van allows him to stretch his legs out and remain comfortable.

Why are Washington's players so insistent on staying modest, while plenty of other guys throughout the league have no problems flashing their wealth? Part of the reason might be the location of the team's practice facility. It's in Virginia, which has much more affordable housing than the Washington D.C. metro area. The team's stars are all fairly unlikely, too–Kirk Cousins was a fourth-round draft pick, Jordan Reed a third-round selection, and Morris was taken in the sixth round. These players know they're put in a disadvantageous position compared to those taken in the first round. Having to prove their worth has likely helped keep things in perspective.

And the players also seem to be aware that the average NFL career just isn't that long. "You don't know how long you're going to play. You've got to save every dollar even though you are making a good salary," Cousins said. "You never know what's going to happen so I try to put as much money away as I can."

After his breakout season this year, Cousins may see a big payday in his future. You can bet he'll continue saving, even if he does splurge on a car made this century.