The Toronto Raptors played incredible team ball in Game 3 of the NBA Finals. Their ferocious defense and tremendous ball movement countered Steph Curry's career playoff-high 47 points. It should have been a night of celebrating a 123-109 victory and reclaiming the series lead, but instead, all the focus is on a fan that shoved Kyle Lowry.

Early in the fourth quarter, Lowry was chasing down a ball heading toward the sideline. He leaped to save the ball but stepped out of bounds before careening into the stands, where fans were sitting courtside. One of those fans shoved Lowry and allegedly made multiple vulgar comments.

"The fans have a place; we love our fans," Lowry told ESPN after the game. "But fans like that shouldn't be allowed to be in there, because it's not right. I can't do nothing to protect myself."

As it turns out, that fan was a partial owner of the Warriors. Venture capitalist Mark Stevens joined the Warriors ownership team in 2013. Vivek Ranadivé purchased a stake in the Sacramento Kings and had to relinquish his ownership in the Warriors. 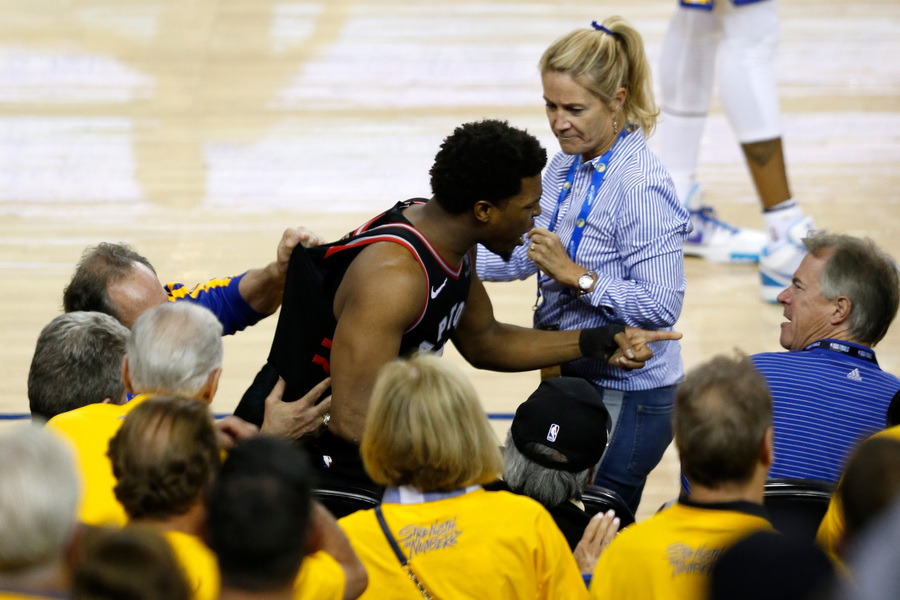 In addition to his ownership stake, Stevens is managing partner of S-Cubed Capital, his family office. He also sits on the board of a handful of public companies, including Nvidia. He's listed as a member of the executive board in the Warriors media guide, as well.

Stevens previously worked at Sequoia Capital with Warriors owner Joe Lacob. The company invested in several companies, most notably Google and PayPal. He's worth about $2.3 billion.

The Warriors issued a statement saying that Stevens would not be allowed to attend any games for the rest of the season.

Meanwhile, the NBA conducted an investigation and brought the hammer down even further. Stevens is banned from all Warriors games and team-related activities through the 2020 playoffs, and he also received a $500,000 fine.

Everyone in this situation has sided with Lowry, and understandably so. Curry and Warriors coach Steve Kerr both lauded how he handled things. A bad situation could have gotten ugly if Lowry had retaliated. Instead, he thought about his family at home.

Shortly after the game, before Stevens was identified, Lowry said he should be banned "forever" from all NBA games. Lowry may not have gotten his wish entirely, but hopefully, the punishment for Stevens will help discourage fans from behaving similarly in the future.

On a lighter note, there was another courtside snafu going on, as well. Beyonce's fans came to her defense after Lacob's wife Nicole was spotted chatting up Jay-Z. It looks like a casual conversation, but the Beyhive certainly doesn't view it that way. For her part, Nicole Lacob said Beyonce and Jay-Z were guests and she loves and respects the singer.

Never a dull moment near the court, huh?

Beyoncé don't like that girl beside her at all.