There are many great "what if" stories in professional sports. Some of them are fun hypotheticals, like "what if the Chris Paul trade to the Lakers hadn't been rejected by the league?" Others only provide further torture to fanbases, like "what if Moises Alou catches that ball in the 2003 NLCS that was ultimately deflected by Steve Bartman?" Of course, people asking that question like to conveniently forget that the Cubs still had ample opportunities to get out of the inning, but made a lot of other uncharacteristic errors, too. That's a story for another time, though.

One of the greatest "what ifs" based purely on potential, though, is the story of pitcher Dwight "Doc" Gooden. We may never again see a player who was so dominant, so at the top of his game at such a young age, only to have everything come crashing down around him. Then, when he was at seemingly his lowest point, he bounced back in a way nobody could have expected.

Let's start at the beginning, though. Dwight Gooden was born on November 16, 1964 in Tampa, Florida. He was taken fifth overall in the 1982 MLB Draft, and after recording 300 strikeouts in 191 innings, in Class-A, he was bumped up to Triple-A. By 1984, he was making his Major League debut with the New York Mets despite only being 19 years old.

Gooden quickly developed a reputation as a power pitcher, with his fastball hitting 98 miles per hour and his curveball sweeping around hitters' bats. Because of his ability to strike out hitters seemingly on command, Gooden earned the nickname "Dr. K," which soon was shortened to simply "Doc." He attracted a section of fans at the Mets' Shea Stadium that called itself "The K Korner," hanging up cards with a red "K" every time the pitcher recorded a strikeout. This practice still happens at ballparks across the country today. 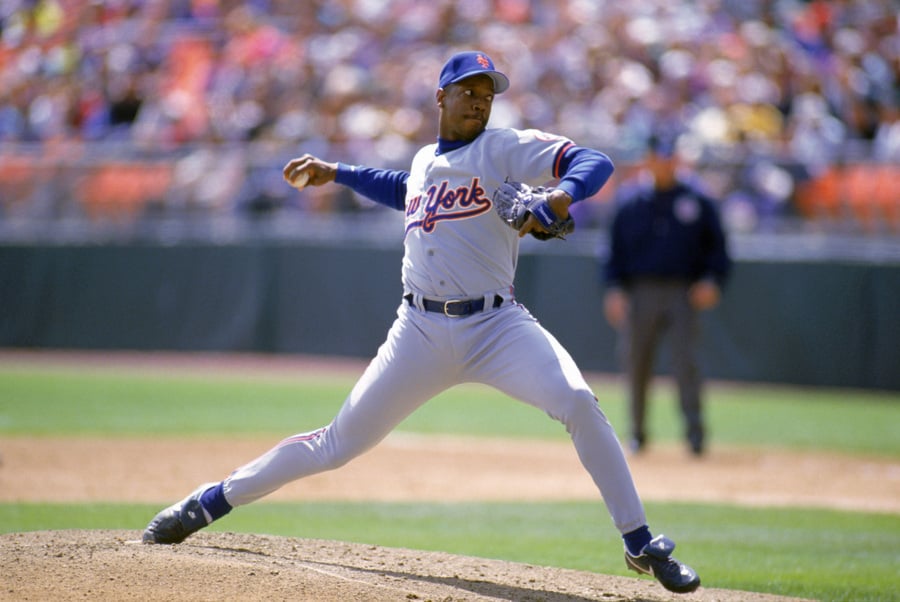 During his rookie season, Gooden became the youngest player to appear in an All-Star game, and promptly struck out the side. He ended up winning 17 games during the year, and had one of the most dominant stretches ever over his final three starts, when he recorded 41 strikeouts to just 1 walk. Gooden's 276 strikeouts led the league and shattered the previous rookie record. He was awarded the National League's Rookie of the Year, giving the Mets two consecutive winners, as outfielder Darryl Strawberry had won the year prior. Gooden also finished second in the NL Cy Young Award voting, losing out to Rick Sutcliffe despite having more NL wins and strikeouts and a lower ERA.

Not deterred by the Cy Young snub, Gooden pitched one of the most statistically impressive seasons in Major League history in 1985, just his second year in the big leagues. He won the pitching Triple Crown, leading the league in wins (24), strikeouts (268) and ERA (1.53). His 1.53 ERA is the second lowest in the live-ball era, which began in 1920.

Gooden was nearly unhittable. He had 31 consecutive scoreless innings over a four-game stretch, and went 49 innings over seven games without giving up a single earned run. Even in games he didn't win, he still dominated the mound, throwing back-to-back nine-inning games without allowing a run, though he received a no decision in each contest. The Mets finished second place in the 1985 NL East, and Gooden looked to be at the top of his game. He had a span of 50 starts from August 1984 to May 1986 where he went 37-5 with a 1.38 ERA in 406 innings, striking out 412 hitters while walking just 90.

However, Gooden would never achieve that level of dominance again. He was still a solid pitcher in 1986, becoming the youngest pitcher to start an All-Star Game at 21 years, seven months and 30 days. He finished with a 17-6 record and an even 200 strikeouts, good for fifth in the National League. In the playoffs, Gooden pitched well initially, but struggled in the World Series, not making it past the fifth inning in either of his two starts. The Mets shrugged his uneven performances off, though, defeating the Boston Red Sox in seven games to take home the 1986 World Series Championship.

During the team victory parade, Gooden was nowhere to be found. Two million people attended the parade, but Gooden wasn't one of them. While the Mets officially said he overslept, Gooden admitted in the 30 for 30 documentary "Doc & Darryl" that he was at his drug dealer's home in Long Island, getting high and watching his teammates celebrate on television.

It turned out to be a warning sign – in December, Gooden was arrested after fighting with police. Being a superstar in his early 20s in New York had started taking its toll; giant murals of Gooden hung throughout the city, and all the late nights and partying led to the pitcher trying cocaine. During spring training in 1987, Gooden tested positive for the drug.

He ended up missing a third of the season as he entered rehab, though he still won 15 games for the Mets in 1987. However, despite looking like a dynasty for years to come, 1986 would be the only season the Mets won a championship. They missed the postseason in 1987, and in 1988, Gooden gave up a home run in the ninth inning of Game 4 in the NLCS against the Los Angeles Dodgers. The Mets could have taken a 3-1 series lead but ended up losing in seven games. Some Mets fans point to this game as the end of the dynasty that could have been–the elusive "what if?" 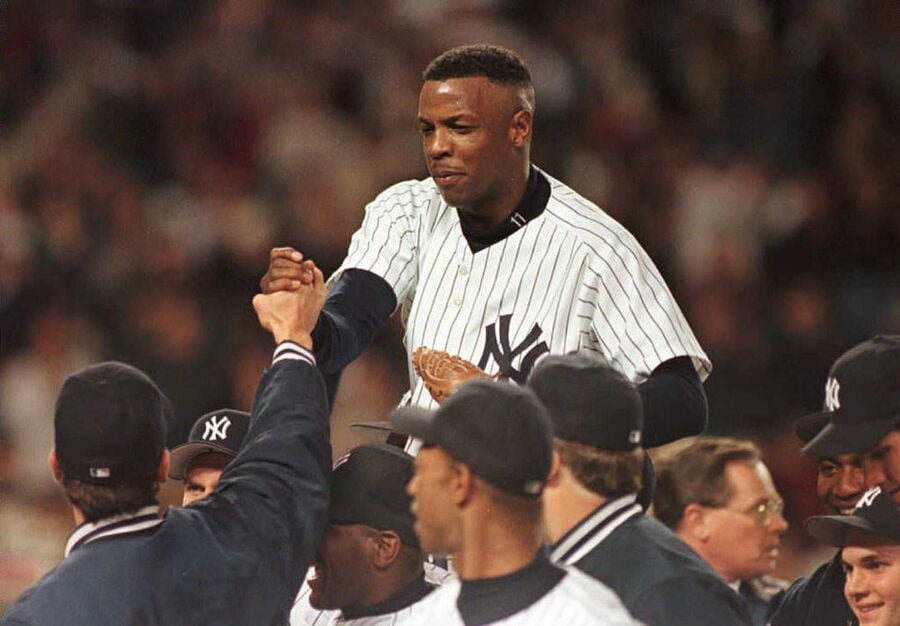 In the early 90s, Gooden's career took a sharp nosedive. His drug abuse likely played a part, though he was also simply overworked early in his career. Analysts estimate he threw nearly 11,000 pitches during the years he was just 18 to 20 years old, which would take a toll on anyone, especially someone whose arm was still developing.

Gooden's off the field issues began to grow, as well. In 1991, he was accused of rape, along with his teammates Vince Coleman and Daryl Boston. The case was dropped, though it was another blow to Gooden's image. The following year was Gooden's first losing season, as he went 10-13. The next season was also a disappointment, as Gooden finished with a 12-15 record.

During the lockout-shortened 1994 season, Gooden, now 29, was still using cocaine regularly. He was 3-4 with a 6.31 ERA when he tested positive for cocaine use. That led to a 60-game suspension. Gooden spoke about the cycle of his addiction years in "Doc & Darryl": Something would go wrong, and he'd use to escape from it, but that only led to more problems.

While serving the suspension, he tested positive again, which resulted in his being suspended for the entire 1995 season. The day after that second suspension, Gooden put a loaded gun to his head. Before he could pull the trigger, his wife Monica walked in and stopped him.

When his suspension was over, Gooden signed with the crosstown rival New York Yankees as a free agent in 1996. He pitched so poorly to start the season he was nearly released, but instead was sent down to the minors. When he returned to the majors, he had shortened his wind-up. On May 14, Gooden threw a no-hitter against the Seattle Mariners. The following day, his father underwent open-heart surgery. Gooden flew back to Tampa to be with his family, bringing along the ball from the last out of the game. His dad never left the hospital, dying the following January.

That no-hitter was the last peak of Gooden's career. He did finish with winning records in 1996 and 1997–his first winning seasons in five years–before signing with the Cleveland Indians in 1998. By mid-2000, after disappointing stretches with the Houston Astros and Tampa Bay Devil Rays, Gooden returned to the Yankees as a spot starter and long reliever. He made two relief appearances during the playoffs, and earned his third World Series ring as the Yankees defeated the Mets.

Gooden finally retired in 2001 after the Yankees cut him during spring training. Though he never won a postseason game, his regular season career record was 194-112. More than half of those wins came before he was 25 years old. In his first year of Hall of Fame eligibility, Gooden was named on only 3.3 percent of the ballots. A player needs at least five percent to remain eligible for Hall of Fame consideration, so Gooden can never make it.

Gooden earned $36 million during his career in Major League Baseball. His biggest contract was a three-year $15.45 million deal that he signed in 1991. His biggest one-year salary came during the 1993-1994 season when he earned $5.9 million from the Mets. Tragically, by 2003, Gooden no longer had the means to support his family and his family forced out of their $2 million Florida dream home. When he and his wife separated, Gooden was ordered to pay $13,600 per month in support despite his claim that this number far exceeded is personal income. At the time, his only source of income was a largely ceremonial $100,000 salary that was paid for him to be an assistant to Yankees owner George Steinbrenner.

In 2005, Gooden was arrested for punching his girlfriend after she threw a telephone at his head. He was released a couple of days later with a misdemeanor battery charge. Later in 2005, he drove away erratically from a traffic stop. He gave the officer his license and refused to leave his car before driving away. The officer reported Gooden was slurring his speech and both looked and smelled drunk. Three days later, Gooden turned himself into police.

His post-retirement woes continued the following year, when he violated his probation by arriving high on cocaine at a scheduled meeting with his probation officer. Instead of extended probation, Gooden chose prison, hoping the jail time would deter him from succumbing to his addiction again. He spent seven months in jail and was not placed on further probation.

Gooden did remain out of legal trouble for a few years, but on March 24, 2010, he was arrested in New Jersey near his home after leaving the scene of a traffic accident. He was found nearby under the influence of an undisclosed controlled substance. Most disturbingly, he had a child with him at the time of the accident. He was charged with DWI with a child passenger and leaving the scene of an accident, among other violations. He pled guilty to child endangerment and received five years probation, as well as an order to undergo outpatient drug treatment.

Baseball fans will always wonder what could have been, but as he battles his addiction, we can only hope Gooden has a solid support group and gets all the help he needs.