Stephen Strasburg hasn't lost a game all season. And now, the Washington Nationals are paying him accordingly.

The team and the pitcher agreed to a seven-year contract extension that'll give Strasburg $175 million. That's not all, though. He'll receive a rolling opt-out clause after the third or fourth year of the extension, and can earn an extra $14 million throughout the duration of his contract – $7 million for performance bonuses, and $1 million for every season he pitches at least 180 innings. He's reached that milestone twice in his first six years in the league, and is on pace to do so again this year.

With the move, Washington locks up one of the premier pitchers in the league. Strasburg avoided arbitration in January after agreeing to a one-year, $10.4 million deal this offseason, though all signs pointed towards him testing the free agent market after this season.

Strasburg, who through May 11 has a career record of 59-37 with a 3.06 ERA and 959 strikeouts, was the first pick in the 2009 draft. Though he grew up on the West Coast and is a product of San Diego State, he said Washington D.C. has "really grown on" him and his family and that they're "very comfortable here."

While Strasburg has been dominant on the field, the signing doesn't come without risk for the Nationals. In his 6+ seasons, Strasburg has visited the disabled list six times. In 2010, he suffered from an inflamed right shoulder and then later underwent Tommy John surgery to repair a torn ulnar collateral ligament in his right elbow. 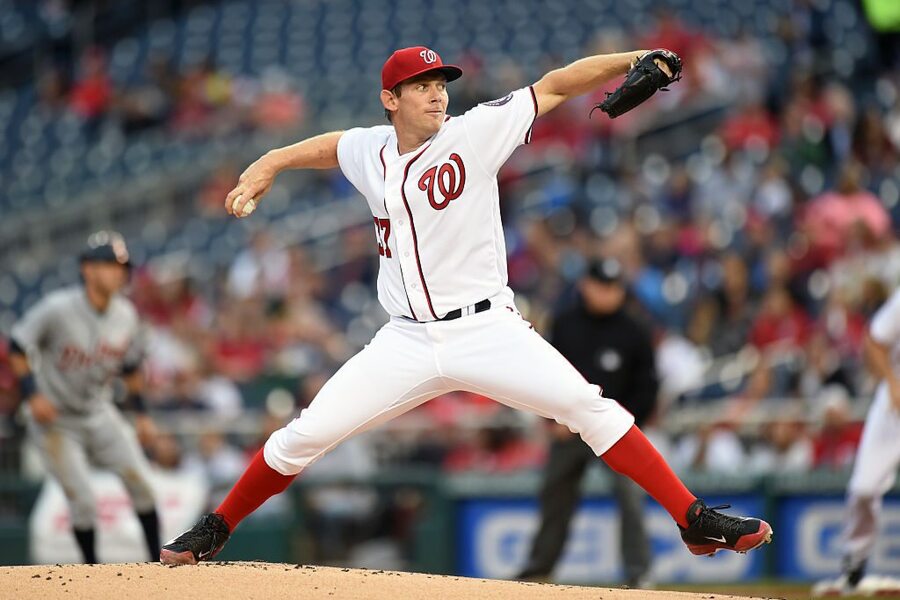 He bounced back from that procedure to become an All-Star in 2012, and led the Nationals to their first trip to the postseason since moving to Washington in 2005. However, in a controversial move, the club kept Strasburg on an inning count for the season, and shut him down in September, before the playoffs. The move was widely criticized, especially as the Nationals lost to the Cardinals in the NLDS.

Strasburg did eventually get to pitch in the postseason, as the Nationals returned to the playoffs in 2014. He recorded 242 strikeouts during the year, tied for most in the majors. But in the postseason, he only struck out two in a Game 1 NLDS loss to the eventual champion San Francisco Giants. The Nationals still haven't gotten out of the first round of the playoffs since Strasburg has arrived.

Strasburg's deal makes him the sixth highest-paid among MLB pitchers, in total dollars equalling the contract Seattle's Felix Hernandez signed in 2013. These large contracts for pitchers have become somewhat the norm–David Price inked a deal with the Red Sox this offseason that is worth an MLB-record $217 million over seven years. Strasburg's teammate Max Scherzer also received a massive $210 million contract when he arrived as a free agent last year, though half of that money is deferred.

Injuries derailed Strasburg's season in 2015, though so far, it looks like he's returned to form in 2016. The Nationals are hoping that finally leads to success in the postseason, and that a big payday will be even further incentive to keep pitching well.