The Five Best Free Agent Signings From This NBA Offseason

The NBA season is upon us. A lot has happened since the Toronto Raptors defeated the Golden State Warriors in the NBA Finals. Players have re-signed, swapped teams, retired…and that's just in the NBA! We've also been wowed by the U.S. Women's National Team winning a World Cup championship, the NFL regular season kicking off, and the MLB playoffs keeping us on the edge of our seats.

All that's to say that if you missed a free agent signing here or there, it's completely understandable. But don't head into the regular season feeling left out. We're here to help you get up to speed with the five best free agent signings this offseason, starting with one that impacted the entire landscape of the league.

Note: This list only includes players that signed with new teams, not ones that re-signed with their current squads (like Klay Thompson with the Warriors) or were acquired in a sign-and-trade (like Kevin Durant with the Brooklyn Nets).

Kawhi Leonard may never win the regular-season MVP, simply because he doesn't play enough games during the regular season. But, as the Raptors showed us last year, it's worth trading a quarter of the season to have a fresh Leonard for the playoffs. He's now won NBA Finals MVP awards with two separate teams. And he's going to play exactly where he wants to be, in southern California.

In signing Leonard, though, the Clippers also scored Paul George. Sure, they had to trade two players – Shai-Gilgeous Alexander and Danilo Gallinari – and five draft picks to get George, but the core of their team remains intact. This was a team that gave a fully healthy Warriors squad fits in the first round of the playoffs. Now they've added two All-Stars to the mix? It's no wonder they're among the favorites to win the championship this year.

J.J. Redick turned 35 this summer, but at better than 41 percent from deep for his career, he's a lethal shooter. That makes him invaluable for any team, as his ability to space the floor is the most coveted skill in today's NBA. In fact, Redick may be getting even better with age – he averaged a career-high 18.1 points last season with the Philadelphia 76ers.

Redick joins a Pelicans team that's looking to jumpstart its rebuilding process by pairing a veteran like Redick with its young talent, including Zion Williamson, Jaxson Hayes, Lonzo Ball, Brandon Ingram, and Josh Hart. Losing a star like Anthony Davis this summer will no doubt hurt, but relatively inexpensive contracts for guys like Redick are signs of a team headed in the right direction. 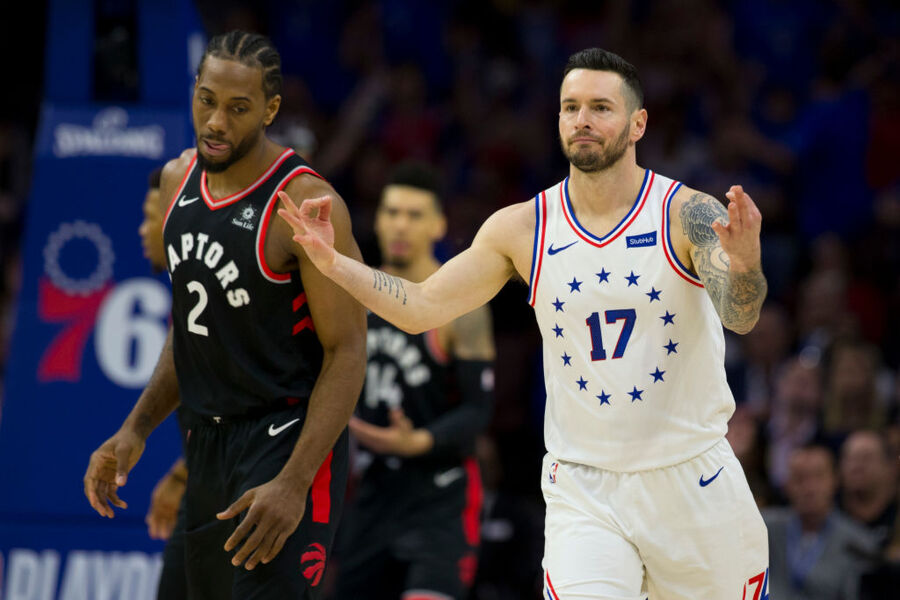 In the span of a few months, the Utah Jazz jumped from potential tough out in the first round of the playoffs to championship contender. While trading for Mike Conley grabbed the headlines, Jazz fans should be equally excited about the signing of Bogdanovic. The 30-year-old forward has continually improved throughout his time in the NBA, culminating in career highs in points, rebounds, assists, steals, field goal percentage, and three-point percentage. The Pacers losing him is a big blow, but their loss is the Jazz's gain.

On top of being a strong contributor on offense that can easily catch fire from long range, Bogdanovic has stepped up his defensive game, too. He hounded LeBron James during the 2017-18 playoffs, forcing the four-time MVP into tough shots and making him work hard to score. If the Jazz advance in the playoffs, guess who they'll likely have to face? LeBron James and the Lakers. Bogdanovic's size also helps against guys like Leonard, too. He'll help the Jazz make plenty of noise this year.

Since Derrick Rose's first knee injury in 2012, the Bulls' point guard situation can be described as shaky, at best. They drafted Coby White out of UNC, but for at least his first couple of years in the league, he'll likely be used as more of a change-of-pace guard off the bench. That gives Satoransky the chance to show he can thrive as a starting point guard.

He certainly looked like he could last season, when he took over for the injured John Wall in Washington. Satoransky's 11.8 points, 4.6 rebounds and 6.6 assists per 36 minutes were extremely solid. At 6'7″, he's got the length to be a pesky defender and the ability to score over smaller guards. He'll be given the wheels to the offense in Chicago; the Bulls are hoping he can drive them back to the playoffs.

Speaking of Rose, he had perhaps his best post-injury season last year with the Minnesota Timberwolves, averaging 18 points per game on 48 percent shooting, including a 50-point effort. He also developed a three-point shot for the first time since…ever, hitting 37 percent of his tries from deep.

Rose is 30 years old and has a lot of wear and tear on his body, but last year seemed like an indication he's revamped his game. Since tearing his ACL, he's never played more than 66 games in a season, so the Pistons will have to expect several DNPs from Rose. But still, getting a starting-caliber point guard for less than $8 million a year is a steal.