The Average NBA Team Is Worth An Incredible Amount Of Money

The NBA is thriving right now. With a ton of marketable stars, a few teams playing some really beautiful basketball, and a product that's popular across the globe, let alone the United States, it's a great time to be involved with the league.

It's especially great if you happen to be an owner of an NBA team, because that would make you incredibly wealthy.

According to Forbes' recent list of the most valuable NBA teams, the average franchise is worth $1.25 billion. That's up 13 percent from last year, and shows no signs of slowing down.

There's a new team at the top of the list, too. Well, kind of new. The New York Knicks regained their number one spot as the most valuable NBA franchise, largely thanks to a TV deal and renovations to Madison Square Garden. The most expensive suites in the entire league have helped the Knicks earn a valuation of $3 billion, a 20 percent increase over last year.

The Los Angeles Lakers, who were number one last year, fell a spot down. Don't feel too bad for them, though; they're still worth $2.7 billion. Third is the Chicago Bulls at $2.3 billion, then the Boston Celtics at $2.1 billion, and rounding out the top five, the Los Angeles Clippers. They're worth $2 billion, which is exactly what Steve Ballmer paid when he bought the team in 2014. Will this be the year he finally gets some return on his investment?

Much like the Knicks' own television network, the average value of an NBA team has risen in part due to the league's new deal with ABC/ESPN. The deal, worth $24 billion over nine years, will give every team in the league more exposure, both nationwide and globally. 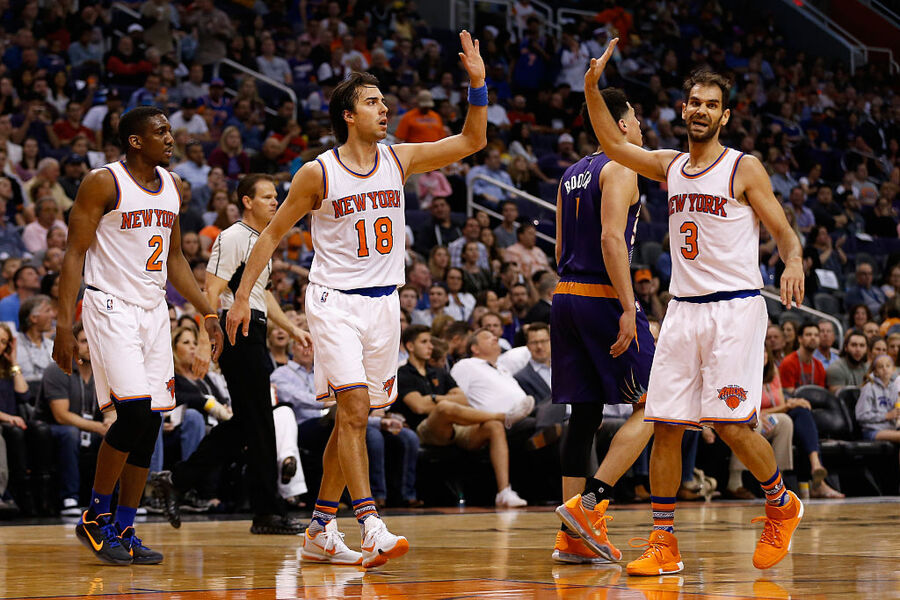 For owners who purchased their teams a while back, they're certainly reaping the benefits now. The Golden State Warriors owners, Joe Lacob and Peter Guber, bought the team for $450 million in 2010. At the time, that was the most anyone had ever paid for a franchise. With one championship under their belt, an extremely entertaining oncourt product, and a new arena slated for the end of the decade, the Warriors are currently worth $1.9 billion.

Another great return on investment is the Dallas Mavericks. Entrepreneur and Shark Tank star Mark Cuban bought the Mavs in 2000 for $285 million. 16 years later, the team is worth $1.4 billion. Even adjusting for inflation, that's a 250 percent increase.

And of course, the Lakers have been in the Buss family for nearly 40 years. Jerry Buss bought the team back in 1979 for $16 million. His children are the majority owners now. You don't need to do the math to realize the $2.1 billion valuation is an amazing increase–we did it for you, and it's more than thirteen thousand percent!

Even teams that aren't worth as much have still proven to be valuable: Michael Jordan owns 93 percent of the Charlotte Hornets now; he bought 80 percent of the team in 2010 on a $275 million valuation. The team is worth $750 million now. And the least valuable team, the New Orleans Pelicans, is valued at $650 million, still nearly a 100 percent increase in value from the $338 million Tom Benson paid in 2012.

It's a wonderful time to be an owner of an NBA team. Even if they're not very good on the court, you'll still be enjoying it from a VIP suite, making tons of money along the way.