How's your bracket looking this year? If you were one of the hundreds of thousands of fans who picked Michigan State to win it all, it's probably not looking too strong. Or maybe you believed West Virginia or Kentucky could dethrone top-seed North Carolina in the East region. Perhaps you thought Cal, with multiple players who will likely find themselves on NBA rosters next season, was a sleeper pick.

If you believed in any of the above teams (or really, any of the teams that have already exited the tournament), you probably aren't winning the bracket pool among you and your friends. While you won't be taking home a money prize, the ACC certainly will be.

Maybe you haven't noticed, but six of the remaining 16 teams hail from the Athletic Coast Conference. That's the most ever from a single league. Duke, Miami, North Carolina, Notre Dame, Syracuse and Virginia are all still standing, and they're going to make a huge profit for their conference.

Since 1991, the NCAA has set aside a pool of money – known as the basketball fund – to reward conferences for their teams' performances in the tournament. The basketball fund was devised to help redistribute the money brought in by television deals. The NCAA's current deal with CBS and Turner is for $10.8 billion over 14 years. It'll pay the NCAA $740 million this season.

Each game in this year's tournament is worth $265,791. That amount is paid out in each of the next six years (so through 2022), with the number for each game, or unit, increasing each year of the payout. Over the six-year span, the total value of a game played in the 2016 NCAA Tournament will be $1.59 million at the very least. 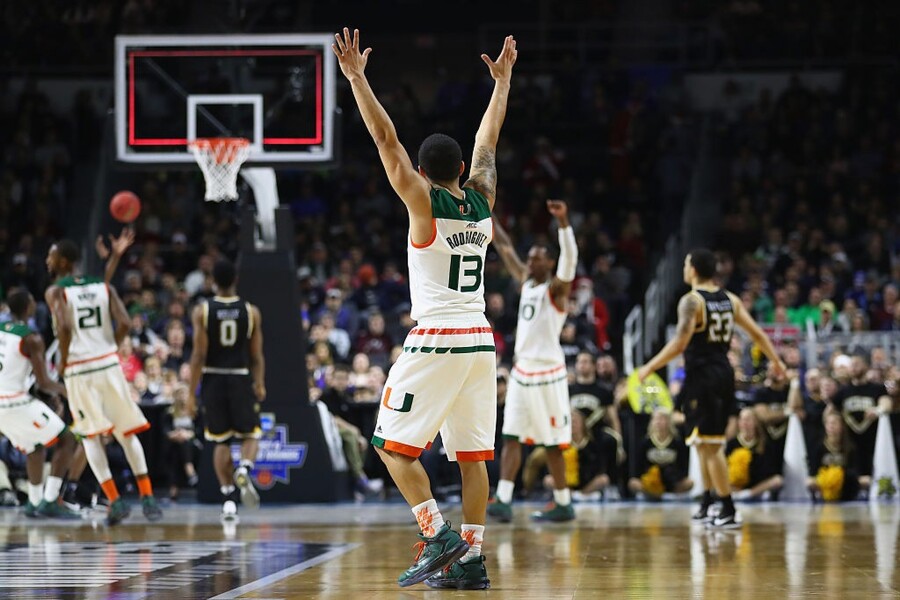 The ACC sent a seventh team to the tournament, but Pittsburgh lost to Wisconsin 47-43 in the first round. That makes the conference's record a sterling 12-1, giving the ACC 13 units. They're guaranteed another six from the Sweet 16–over six years, those 19 units will become more than $30.3 million.

It's highly unlikely all six teams lose, though. And because the ACC doesn't have any intra-conference battles yet, all six could theoretically win. We're almost guaranteed to see at least one ACC team in the Elite Eight, if nothing else. And if things break just right, we could have an all-ACC Final Four, with Duke and Miami representing the West and South regions, and either UNC/Notre Dame and Virginia/Syracuse representing the East and Midwest regions, respectively.

This isn't even new ground for the ACC. Last year, they were the first conference to guarantee themselves more than $30 million from one tournament. Conferences earn one unit for each game their members appear in, except for the title game. In 2015, the ACC earned 21 units, worth more than $32.8 million.

The most units ever earned by a conference was in 2009, when the Big East also sent seven teams to the tournament. Five Big East teams reached the Sweet 16, four advanced onto the Elite Eight, and two more made it to the Final Four. If all six ACC teams advance to the Elite Eight, they'll break that record. Even if one or two lose, the ACC would still be on a solid path towards crushing 24 units, equalling even more money for the conference.

ACC teams distribute the money they get equally among all schools. That includes the schools that didn't make the NCAA (or any other) Tournament, so perhaps no one is rooting harder for the ACC's success than the Boston College Eagles, who set the bar for futility this year, going winless in conference play during both the basketball and football seasons.