The 10 Highest-Paid Players In Major League Baseball This Season

The MLB season is just a few weeks away, and teams are already preparing for Spring Training. And while the Covid-19 pandemic will continue to add challenges to the year, like postponed or canceled games and teams playing at less than full strength, most rosters are set for the start of the year.

Despite a shortened free agency period, there were still some major deals handed out this offseason. The Los Angeles Dodgers just gave Trevor Bauer a nine-figure deal that will make him the highest-paid player for the 2021 season. Bauer isn't the only one who will be making bank this year, though.

Here's a look at the ten highest-paid players in the major leagues. While it's generally a good rule of thumb that these players also have huge deals overall, these earnings only factor in salary for this upcoming season.

The shortened 2020 season only consisted of 60 games, but Bauer still impressed on the mound. He threw 73 innings, struck out 100, and walked only 17 while posting a fantastic 1.73 ERA. He won the National League Cy Young Award and led the Cincinnati Reds to the playoffs. In his final start of the regular season and lone postseason start, he combined to strike out 24 batters and allow a lone run in 15⅔ innings. As a result, Bauer commanded a ton of attention during the offseason, with multiple teams vying for his services. In the end, the pitcher signed a three-year, $102 million deal with the reigning World Series champion Los Angeles Dodgers, joining an already stacked rotation.

Before the 2019 season, Trout signed the largest extension in baseball history: 12 years, $426.5 million. He'll remain an Angel through the 2030 season and wasted no time proving his worth. He won the American League MVP Award in 2019 — the same year he signed that extension — and followed it up with a top-five finish last season. In fact, the 29-year-old has never finished outside the top five in MVP voting in any of his nine seasons in the league and has eight All-Star appearances to his name already. He'll be dominating MLB for years to come. 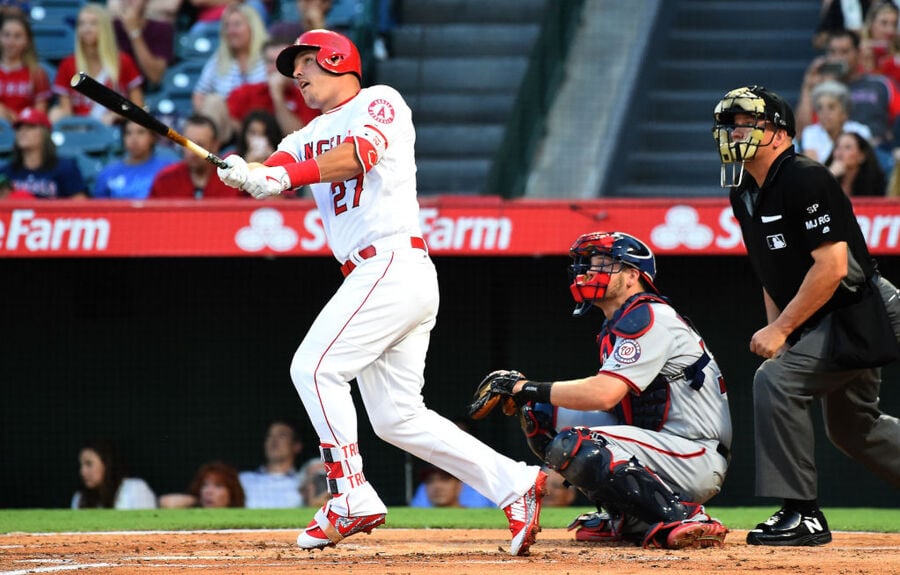 Though Bauer will make the most money this season, Cole has the largest contract of any pitcher in the major leagues. He inked a nine-year, $324 million deal last offseason with the New York Yankees. He had been one of the best pitchers in the league for several seasons but put up his best season in 2019, going 20-5 with 326 strikeouts in 212⅓ innings. He finished second in the AL Cy Young voting that year and helped lead the Houston Astros to the World Series, where they lost 4-3 to the Washington Nationals. Cole may not have won a championship, but he did score a huge deal.

Perhaps it's no surprise that the top four guys on this list all play for California or New York teams. The major markets can dish out some serious cash, and deGrom is no exception. He'll make the same amount of money this year as Cole will, but deGrom's total contract is worth a modest $137.5 million over five seasons. He won the NL Cy Young Award in both 2018 and 2019, and led the league in strikeouts last year, fanning 104 batters despite having multiple injuries.

The Colorado Rockies signed their star third baseman to a massive eight year, $260 million deal that kicked off in 2019. But they didn't hang onto him for long, trading Arenado to the St. Louis Cardinals for pitcher Austin Gomber and four minor leaguers. Along with Arenado, the Rockies are reportedly covering more than $50 million of Arenado's remaining salary, including all of it for this season. He can opt out of his deal both after this season and the 2022 campaign, though if he stays through 2027, the Cardinals will have him on the bargain salary of $15 million. Arenado has won a Gold Glove in each of his eight seasons, made five All-Star teams, and finished in the top eight of MVP voting five times. The Cardinals hope he can help deliver a World Series title back to St. Louis.

Sometimes a championship is all it takes. Strasburg had a stellar 2019 campaign and then built on it with one of the finest playoff runs ever. He delivered a 5-0 record with 47 strikeouts in 36 ⅓ innings, leading the Washington Nationals to their first title and winning World Series MVP along the way. But that wasn't all Strasburg took home — he also scored a seven-year, $245 million contract along the way. Thanks to carpal tunnel in his pitching arm, Strasburg only made two starts last season, but the Nats expect him to get back to a high level for the rest of his contract.

Scherzer might be bummed that his teammate Strasburg is earning just a little bit more than him this year. Then again, maybe Scherzer is perfectly content with three Cy Young Awards, a World Series victory, and a deal that will have paid him $210 million by the end of this season. Just about everyone on this list recently signed their massive contracts, but Scherzer is on the final year of his. When you consider what the 35-year-old has accomplished during this contract — beyond the three Cy Youngs and World Series championship, Scherzer has an 84-43 record and a 5.8:1 strikeout to walk ratio — this is the biggest bargain on the whole list.

Back in 2019, Machado was the first-ever player to sign a $300 million deal. He's since been surpassed by a handful of players, but he's still doing just fine for himself. Machado wisely spread his signing bonus out across multiple seasons, so he's making an extra $2 million each year. Machado's 2020 was impressive — 16 home runs and a .950 OPS while playing in all 60 games — and the Padres made the playoffs for the first time in 14 seasons.

This deal is an example of a big one gone wrong. The Astros pitcher made one start in 2020 and had Tommy John Surgery in September. He'll likely miss all of 2021 while recovering. That means the two-year, $66 million deal he signed in 2019 will result in a 1-0 record with seven strikeouts. Not necessarily the production the Astros were hoping for. However, since joining Houston in 2017, the 38-year-old has made two All-Star teams and won a Cy Young award and a World Series ring, so the team probably isn't too upset about his recent injury woes.

Like Verlander, Greinke will be a free agent after this season, but unlike Verlander, Greinke is set to play all season long. The Arizona Diamondbacks signed Greinke to a six-year, $206.5 million deal that started in 2016. The D-backs traded Greinke to Houston in 2019, and he slipped right into the ace role while Verlander was on the mend. He actually pitched in more innings in the shortened 2020 season (67) than he did in 2019 (62.2), racking up 67 strikeouts to just 9 walks while leading the Astros to Game 7 of the ALCS. He'll look to continue his strong play as the team's unquestioned number one starter.