The frenzy of NBA free agency is behind us, and teams are now starting to look toward the upcoming season. Before things tip off, every team is buzzing with excitement; even the worst squads in the league have hope when the games haven't yet been played.

Players will be excited to get back on the court, and some are more amped than others. That's because, for the first time in NBA history, the league's top stars are all going to be making huge dollars. Ten players will take home at least $39.3 million with their contracts. Paired with possible incentives, endorsement deals, and other perks, they'll all easily clear $40 million.

If you think Steph Curry makes an absurd amount of money, you're not wrong — but the Warriors likely consider it payback for the beginning of his career, when he was wildly underpaid. Curry was on a four-year, $44 million contract that kicked in during the 2013-14 season. That means he was making just $11 million per year during the Warriors' first championship run, the season they went 73-9, and their second championship. He signed a four-year, $215 million extension this summer, which will pay him just under $60 million during the final season of the contract.

The second-highest-paid player on this list, Wall also may be the most fragile. He suffered an Achilles injury during the 2018-19 season which forced him to miss 50 games that year, the entirety of the following season, and 42 games this past season. But he's looking for a second chance at stardom in Houston, which could land him another lucrative deal after this one's up (though it likely won't be worth nearly as much). Wall has a player option next season for more than $47.3 million — it would be absolutely shocking if he turns that down.

James Harden started last season with the Rockets — where he signed an extension worth $228 million in 2017 — before being traded to Brooklyn. Harden has a player option for the next season worth $46.8 million, though he may decline it to sign a longer deal with the Nets. His first season on his new team didn't go nearly as smoothly as he'd hoped. He missed games during both the regular season and playoffs due to injury, and he enters this year still searching for his first-ever NBA title. 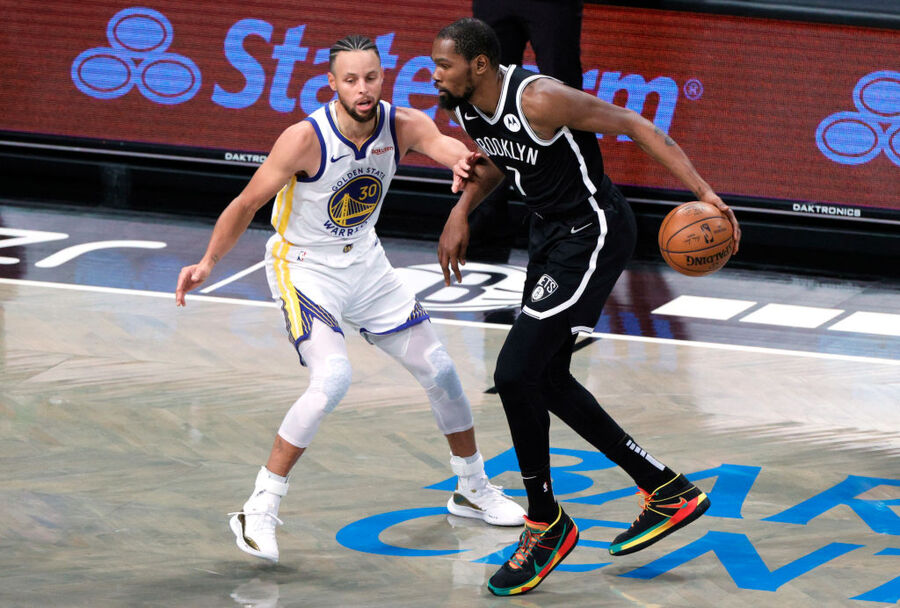 In acquiring Wall, the Rockets traded one $40+ million man for another. Westbrook signed a massive deal with the Oklahoma City Thunder, and since inking that extension he's moved on to the Rockets, the Washington Wizards, and now the Los Angeles Lakers. It'll be fascinating to see how he fits alongside LeBron James and Anthony Davis. But one thing's for sure: the team is going to have a ton of guys that aren't afraid of taking over a game.

Durant came one toe on the line away from sending the Nets to the Eastern Conference Finals, where they likely would have been favorites to win the NBA title. He'll get another crack at it this year, though he's hoping he has a healthy surrounding cast, including Harden and Kyrie Irving. On top of next year's salary of $40.9 million, Durant can also earn $1.1 million in likely incentives. He may be the best player in the NBA right now and just inked a long-term deal to stay in Brooklyn through the 2025-26 season.

James has had a rollercoaster of a career in Los Angeles since joining the Lakers back in 2018. He suffered an extensive injury his first year as the Lakers missed the playoffs entirely, but bounced back to capture his fourth NBA championship and Finals MVP in the NBA Bubble. This past year, the Lakers made the play-in tournament, defeating the Golden State Warriors to earn the seventh seed. They were eliminated in the first round by the Phoenix Suns, but are back to being among the title favorites heading into this season. James is also perhaps the most popular player across the world; with the revenue and number of fans he brings to the league, he's arguably wildly underpaid.

The reigning Finals MVP has been living the good life in Milwaukee. He helped end the city's 50-year championship drought and re-upped to stay in town for the long run. With an extremely likable personality off the court, Antetokounmpo will likely add on quite a bit to next year's salary with new sponsorship and endorsement opportunities.

Though George may not have fully shaken off the "Pandemic P" nickname during this year's playoffs, he did help lead the Clippers to the franchise's first Western Conference Finals while his teammate Kawhi Leonard sat out with a knee injury. George and Leonard joined the Clippers together back in 2019. The former signed an extension before the start of last season while the latter just agreed to a four-year deal this summer. Both of the Southern California players are set on one thing: winning a championship in front of their hometown fans.

Leonard is probably the best two-way player in the league, though he comes with the caveat that he's going to miss several games every year. Whether through load management or an injury, Leonard has sat out 73, 22, 15, and 20 games during the past four seasons. He'll likely miss most or all of this upcoming season while recovering from his latest knee injury, but he offers enough when healthy that the Clippers were comfortable signing him to a massive deal.

We know Damian Lillard will make $39.3 million this season. We don't know if he'll still be on the Blazers when all is said and done. The team's star player has expressed frustration with the franchise as they made offseason personnel moves, including bringing in Chauncey Billups as head coach. There have been rumblings of a potential trade request, though it's unclear how much validity there is to those rumors. Regardless of where Lillard plays, you can bet he'll have at least one clutch shot that we're all celebrating at some point this season.