A few weeks ago, Dez Bryant and Demaryius Thomas signed big contracts with the Dallas Cowboys and Denver Broncos, respectively. At the time, we speculated that this was a new bar for the top wide receivers in the league. It turns out the big money is having a trickle down effect on other receivers, too.

Coming off of his first Pro Bowl season, T.Y. Hilton just signed his first huge contract with the Indianapolis Colts, to the tune of $65 million over five years, with $39 million guaranteed. Compare that to Thomas, who has had a much more productive career, but who's only making $5 million more over the same timeframe, and $4.5 million more guaranteed.

Of course, with one of the best quarterbacks in the game under center, the Colts are banking on their newly-extended receiver continuing to improve. Though he's fairly small at just 5'10" and 183 pounds, Hilton has gotten better each season, with increasing yardage totals and a perfect knack for getting behind the secondary. Last year, he posted 82 receptions for 1,345 yards and seven touchdowns while starting all 15 games he played in. 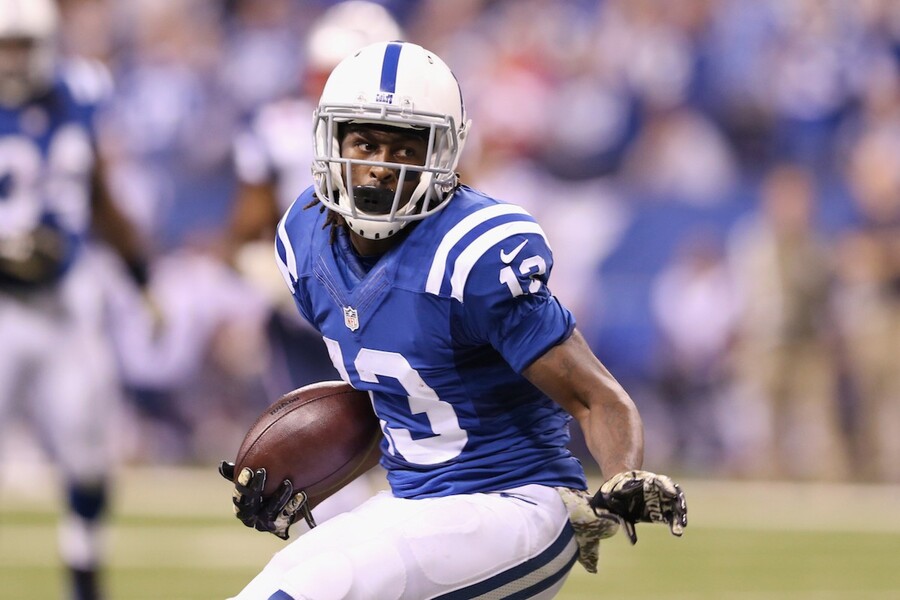 Hilton was already a massive bargain when he was drafted; the Colts were paying him only $2.6 million over four years. This new contract is a win for both sides – obviously it's big money for Hilton, but if he progresses into a top-tier pass-catcher on the level of Bryant and Thomas, this looks like a steal for the Colts.

The fourth-year receiver will have some help, too. This is welcome news; after last season, the other top options were an aging Reggie Wayne, and an inconsistent Colby Fleener and Donte Moncrief. Though the Colts lost Wayne, they still have a more experienced Fleener and Moncrief, plus they added Andre Johnson, who managed 85 catches for 936 yards last year, despite having a combination of Ryan Fitzpatrick, Ryan Mallett and Case Keenum throwing him the football. We wouldn't blame you if you thought that was the lineup for a 90s alternative rock band.

Indianapolis is also bringing in the ageless wonder Frank Gore as running back. It seems every year, 100% of analysts say Gore is over the hill. He's 32, so you know the end is near. Yet he's consistently maintained a high level of play, posting 200 carries for eight straight years, while maintaining at least four yards per carry. Until he stops producing, defenses have to worry about him.

With the new additions, defenses won't be able to key in on Hilton, and you'd have to imagine his yardage, reception and touchdown totals will all improve. Regardless if he makes that next jump, this contract benefits other receivers like Hilton, who have posted good but not consistently great numbers throughout their careers. And with the NFL in pass-first mode right now, teams know they need to lock up their receivers to succeed, even if that means throwing a big contract in front of them.