One of the more entertaining subplots of any Super Bowl – aside from the halftime show and commercials – is the astounding number of things we can now bet on during the game. Sure, you could go the traditional route and pick a team to win, or bet the over/under for total points, but what's the fun in that? Here are 12 prop bets to check out instead. If nothing else, they'll keep you invested for the entire game, even if it becomes a blowout. 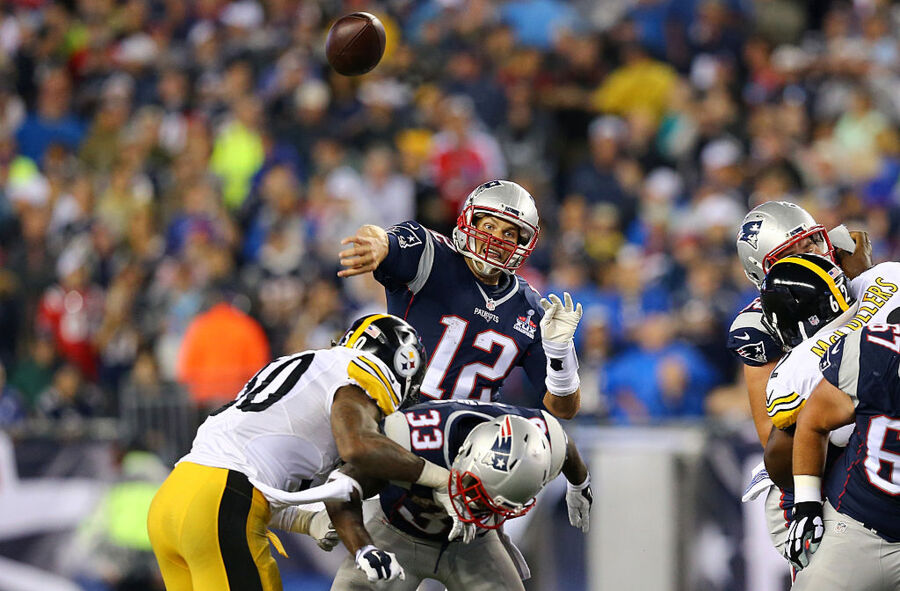 Will the game break the Super Bowl record for combined quarterback passing yards?

If you're a fan of shootouts, this is the bet for you. The odds of "yes" happening are at 3/2. The all-time combined record involved the New England Patriots, in fact; they and the Carolina Panthers combined for 649 passing yards in Super Bowl XXXVIII. During the regular season, Matt Ryan averaged 309 passing yards per game, and Tom Brady averaged just over 296. They'd have to do 45 more yards than their average, which seems like a stretch until you look at the playoff averages: Brady is throwing for 335.5 yards a game while Ryan has tossed for a whopping 365 yards per contest. That would crush the over.

Will a challenged play get overturned?

"Yes" has 3/1 odds. It's more of a longshot because there has to be a challenge first before one can be correct – so really, you need two things to happen. But the NFL's officials have not been great this year. If one bad call does get made and a coach challenges it, it's likely to be overturned. Why not go for it?

Weight of the heaviest player to score a touchdown

The over/under is 249.5 pounds, which means this could be worded another way: will LeGarrette Blount score a touchdown? He's listed at 250 pounds, so if you think he cracks the end zone, take the over. If we find out come game day that he's suddenly dropped a pound or two, switch to the under like nobody's business. 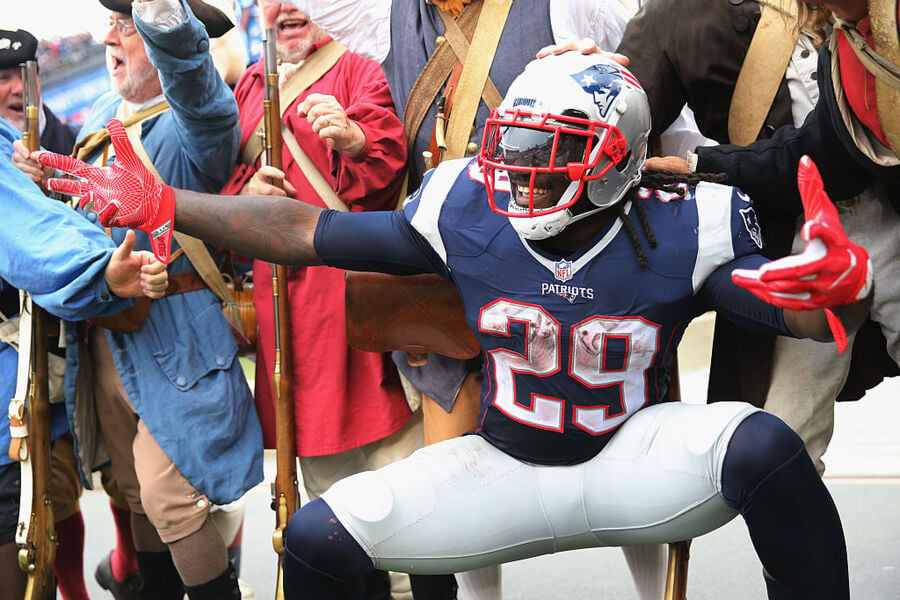 Odds the phrase "Houston, we have a problem" gets said

With the game being held at NRG Stadium in Houston, this could be very well be uttered. What if the Falcons hop out to a 14-0 lead and then the Patriots turn the ball over? Or if a team gets sacked three times in a row? "Yes" is at 5/2 odds; you could make worse bets.

The over/under is 2.5 – the under seems like the right play here. The "Dirty Bird" was the Falcons' signature dance the last time they made the Super Bowl. They'll certainly get mentioned once, and if a player scores a touchdown and does the "Dirty Bird," it'll get said again. Three is pushing it. The only way we'd see that is if a Patriots player also busts out the vintage dance move after a score.

Number of references to "Deflategate/Spygate"

This over/under is 4.5, which makes the under possibly the biggest lock of the entire Super Bowl. Deflategate is now more than two years old, and we're all sick of it already. It'll get mentioned once, maybe twice. Anything more than that would just be absurd. 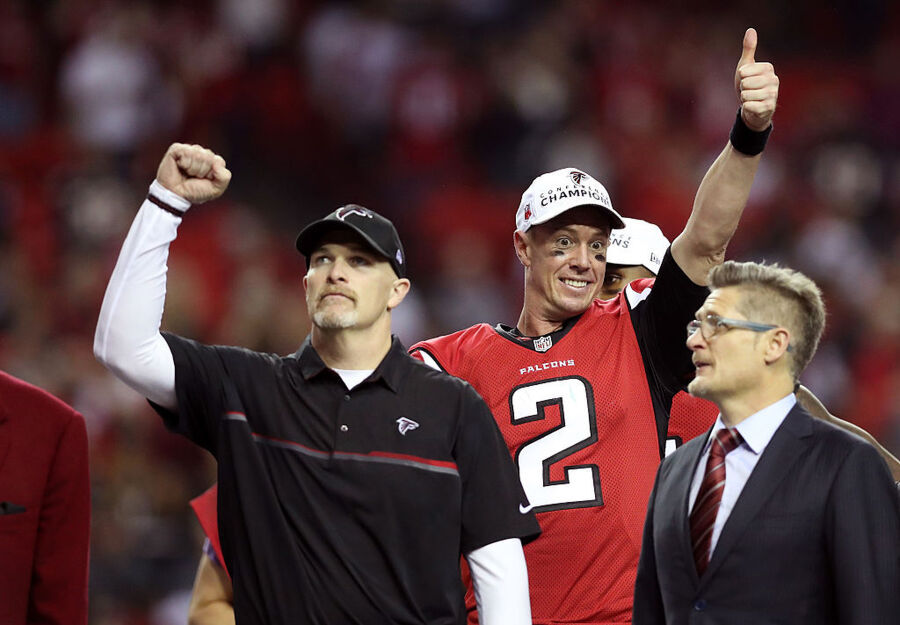 Odds Dan Quinn wears a hairpiece during the game

Dan Quinn, head coach of the Falcons, does not have any hair on his head. The odds of him wearing a hairpiece to change that fact are long (50/1). While it would be amazing to see this – and would likely be lauded as a genius coaching move opposite Bill Belichick – don't get suckered in and choose "yes" here.

Luke Bryan is performing the National Anthem this year; with 4/1 odds this could be an interesting bet to take. If Google Images is any indication, Bryan wears blue jeans often, so it's really just a matter of the cowboy boots. You could also bet on if he's wearing a hat of any kind (3/2 odds) or if he puts his hand on his heart during the anthem (1/6 odds).

Will Joe Buck be clean shaven for the Super Bowl broadcast?

Joe Buck and Troy Aikman will be calling the game for FOX on Sunday. Throughout the season, Buck has been steadily growing a stubbly, patchy beard. It's likely that trend continues, but this is the biggest game of the year, after all. Buck may want to clean up for the largest audience he'll broadcast to this season. At 10/1 odds that he does shave, it might be worth placing a bet (and maybe mailing a razor to Buck's house). 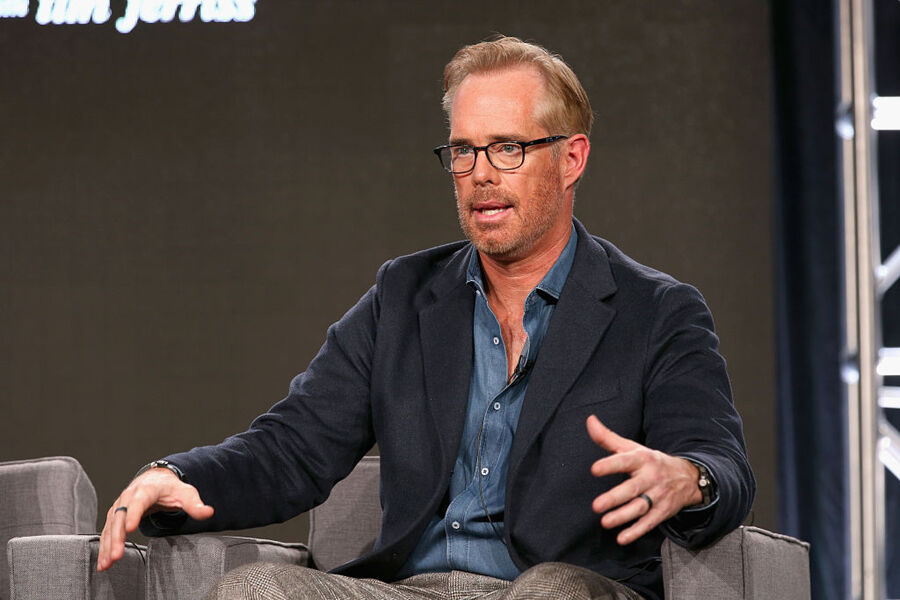 Odds on the primary color and pattern of Joe Buck's tie

These are actually two different bets. The color is more intriguing; while blue is a heavy favorite at 1/5 odds, purple (14/1) and red (16/1) are enticing options. You could also take the field at 9/1 and hope he goes with something green, yellow, or black. As far as the pattern goes, solid is a heavy favorite at 9/8 odds, with stripes coming in second at 3/2. Only the crazy would bet on polka-dots (12/1). Buck may go rogue and shave, but he's not going to get as wild with his tie selection.

Bud Light is the favorite here at 25/1. Other options include Lexus, Intel, Skittles, Wix (all 30/1), TurboTax (33/1), and the incredibly long shot Hyundai. Even at 500/1 odds, can you really imagine a sport where all 32 teams are based in America first airing an ad that's not from an American company?

If Gaga follows the path of previous performers, she's going to start off slowly and build up to a huge finale. That makes "Born This Way," at 4/1 odds, the best value pick here. "The Edge of Glory" is at 3/1 odds but that really seems more like a closing number. Either way, enjoy the show – and the game! 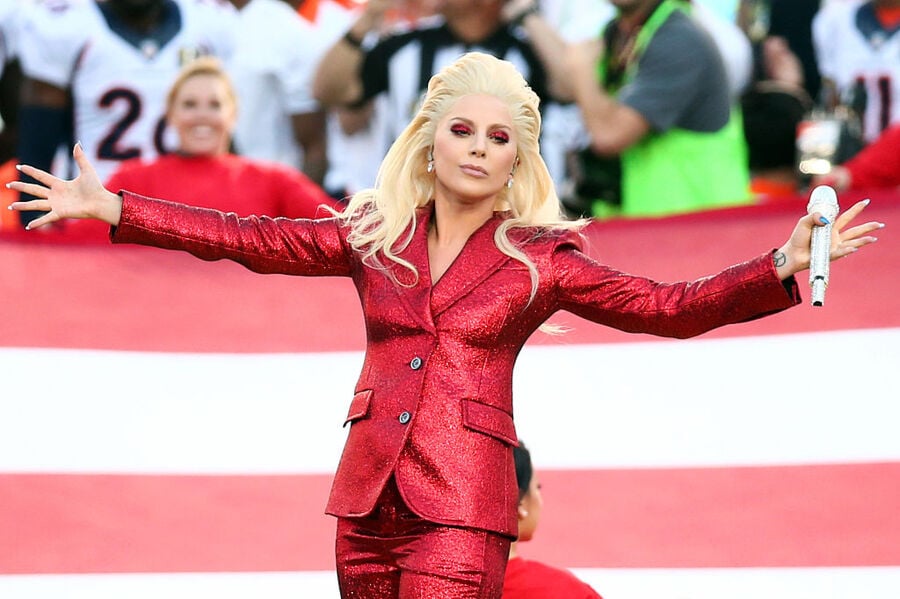 Christopher Polk/Getty Images
Did we make a mistake?
Submit a correction suggestion and help us fix it!
Submit a Correction