After years of professional football being absent from the second largest market in the country, the league's owners recently gave the Rams approval to move back out to Los Angeles. The team was founded as the Cleveland Rams, but moved out to Los Angeles in 1946. They played there for 48-years before leaving for St. Louis because of stadium issues.

Two decades later they are headed back to Los Angeles because of stadium issues. Ironic? Maybe. Expensive? Incredibly.

By time the Rams play their first game in their brand new stadium, Stan Kroenke (the team's owner) will have spent over $3 billion and possibly close to $4 billion. 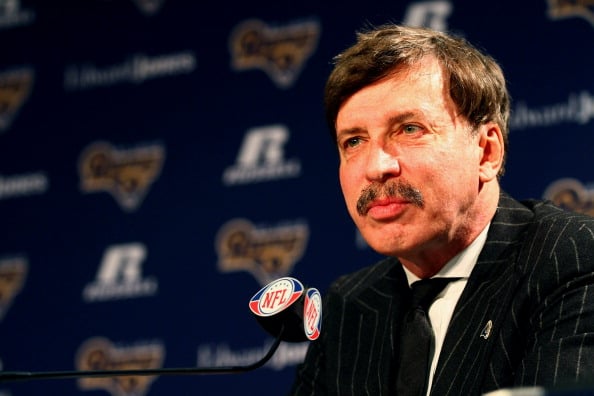 For the right to move to the City of Angels, Kroenke will have to pay a $550 million relocation fee to the NFL. The fee is meant to compensate the other owners for the lost opportunity to move to Los Angeles themselves and for the increase in value the franchise will receiver because of the move. There were rumors it could have been as high as $1 billion or as low as $250 million.

To get the project approved by voters Kroenke ended up spending $1.7 million to help get the initiative passed. The Rams will also be responsible for paying the moving costs for every player on the roster that establishes a permanent residence in the Los Angeles area prior to the team's first regular season game. So before the team even leaves St. Louis the bill for the move is already over $551.7 million.

The bulk of the cost will come from the stadium project of course which Kroenke is privately financing. He has publicly estimated the cost to be $1.86 billion making it the most expensive stadium in the world, but the cost of the stadium is expected to be much more. Some NFL officials and owners have estimated the cost could be as much as $2.66 billion while others have speculated it could reach $3 billion.

Why so much? Along with being the most expensive stadium in the world, it will be the largest at 3 million square feet including seats for 80,000, identical locker rooms, office space, and two owner's suites (the team is hoping to share the stadium with the Raiders or Chargers).

The stadium is actually going to be a part of a 298-acre entertainment complex that some are referring to as NFL Disney World. Along with the stadium there will be a 6,000-seat performance venue, 890,000 square feet of retail space, and 780,000 square feet of office space. Plans are also in place to build 2500 homes, a 300-room hotel, and 25 acres of parks and open land.

So between the relocation fee and stadium Kroenke is expected to dish out anywhere from $3.21 billion to $3.55 billion. Even though he has a net worth of $7.7 billion he has taken out a $1 billion loan to help cover the cost, and could be taking on a partner in the Chargers or Raiders to help defray costs.

Will it be worth it? Probably.

The team's value was among the lowest in the NFL at $1.45 billion in St. Louis (No. 28) in 2015. After the Rams move to Los Angeles the team's value is expected to increase by anywhere from $800 million to $1 billion putting their value around at $2.25-2.45 billion. Other estimates have the Rams new value rising as high as $3.5 billion.