Sean McVay is having himself a pretty good 2022. He coached the Los Angeles Rams to a Super Bowl victory — the youngest coach to ever lead a team to a championship — he's getting married later this year, and he's been courted by TV networks and streaming services as a football analyst.

One of those suitors is Amazon, which has the exclusive rights to Thursday Night Football for the next five years. Amazon Prime subscribers can watch those games, but they won't hear McVay's voice calling the action.

Per The New York Post, Amazon reportedly offered McVay $100 million to join as an analyst. However, ESPN's Adam Schefter reported McVay turned them down — along with all other television opportunities — so he can stay with the Rams and defend the team's title. 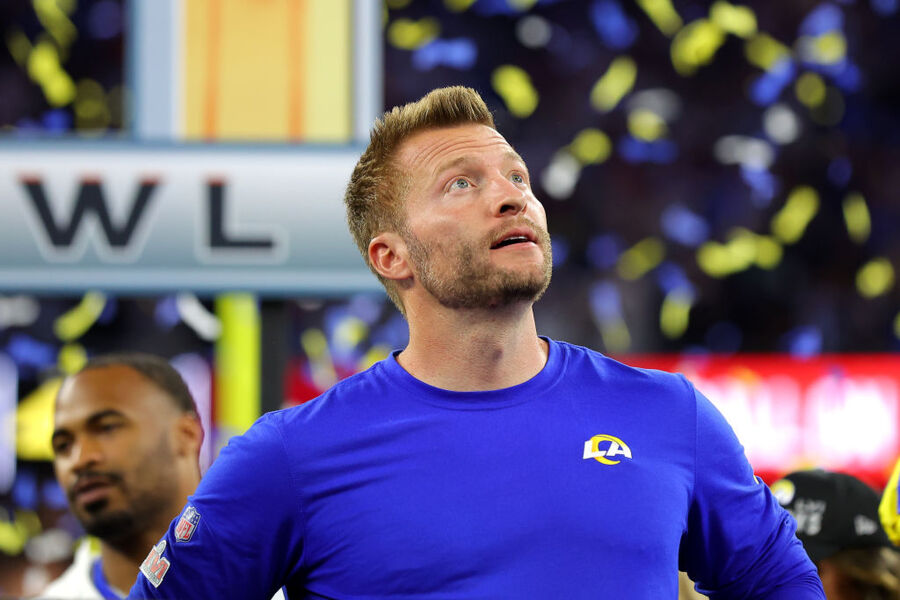 Tony Romo made headlines in 2020 when CBS signed him for $17 million per year. ESPN is paying Troy Aikman roughly the same amount to leave FOX. While it's unclear how long of a contract Amazon offered McVay, his annual salary would have likely been in that same range. Instead, he'll stay with the Rams and make $8.5 million in salary.

Leading up to the Super Bowl, McVay added fuel to the fire that he was considering a TV job when he said he didn't want to coach until he was 60 or 70 years old. He wants to start a family and be able to spend time with them. That, along with some other reports and rumors, led to speculation that McVay's time with the Rams was nearing an end.

But at least for one more year, McVay isn't going anywhere. Since becoming the Rams head coach in 2017, the 36-year-old McVay has compiled a 55-26 record with four trips to the playoffs and two Super Bowl appearances.

During the team's Super Bowl rally, McVay started a "run it back!" chant, encouraging star defensive tackle Aaron Donald to return for a shot at another title. Donald, who had been considering retiring, said he'll come back if the team brings back other key pieces like Von Miller and Odell Beckham, Jr.

By returning to the sidelines, McVay is making sure at least one core person is back. Now, his main focus is working on a repeat championship. The broadcast booth can wait.