Sam Bradford Made More Than $1.5 Million Per Game – Inside His Impressive NFL Earnings

With the first pick of the 2010 NFL Draft, the Los Angeles Rams (then still in St. Louis) selected Sam Bradford. At the time, the pick made plenty of sense. The Rams needed a new franchise quarterback. Bradford had an impressive college career at Oklahoma, which included winning the Heisman Trophy in 2008.

But in 2009, Bradford suffered multiple shoulder injuries. He ultimately only played in three games for the Sooners before declaring for the 2010 draft. The Rams weren't scared off by potential injuries, though in hindsight, maybe they should have been.

So how did Bradford make so much money despite so much inconsistency?

To start, Bradford had some impeccable timing. His rookie deal was worth six years and $78 million, with $50 million in guarantees. The contract actually had a max value of $86 million, making it the largest rookie contract ever. 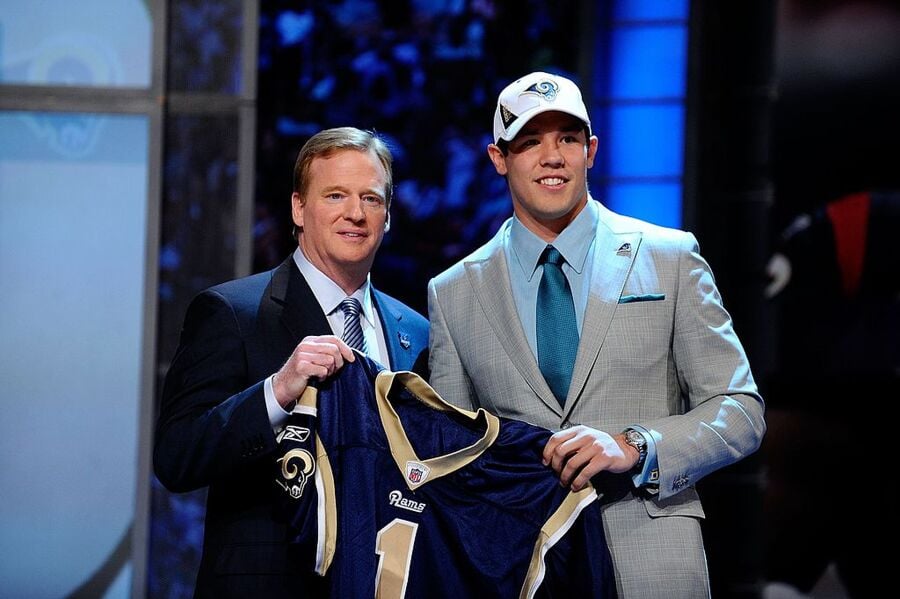 The following year, the NFL had a new collective bargaining agreement. Rookie salaries were dialed way back. For comparison, Cam Newton – the 2011 number one pick and also a potential franchise-changing quarterback – signed a $22 million contract over four years.

Despite his massive deal, Bradford never put up great numbers for the Rams. Though he won Offensive Rookie of the Year in 2010, his best season in St. Louis came in 2012. He threw for 3,702 yards and a career-high 21 touchdowns. It was also the last time he played in all 16 games.

In fact, over the next two seasons, Bradford only played in seven games. He tore the ACL in his left knee in the middle of the 2013 season. Then, he re-injured the same knee during a 2014 preseason game, missing the entire year.

The Rams traded Bradford to the Philadelphia Eagles prior to the 2015 season. Bradford put up solid but not spectacular numbers en route to a 7-9 finish.

The following year, the Eagles gave Bradford a two-year, $36 million extension. However, after trading up in the draft to select Carson Wentz, the team suddenly had no use for Bradford. Philadelphia traded him to the Minnesota Vikings after Vikings starter Teddy Bridgewater tore his ACL.

Bradford mustered the greatest season of his career in Minnesota. He completed a career-best 395 passes and threw for a career-high 3,877 yards. His 4:1 touchdown-to-interception ratio (20 touchdowns to just 5 interceptions) was also the best of his career. The team only finished 8-8, but it seemed like Bradford was maybe on his way to a revival.

Minnesota opened the 2017 season on Monday Night Football. Bradford went 27-for-32 with 346 yards and three touchdowns, leading the Vikings to a victory over the New Orleans Saints. The celebration was short-lived, though. Bradford's balky knee was acting up again, and a knee scope revealed additional wear and tear. He played just one more game before the Vikings put him on injured reserve, ending his season.

Not deterred by his injuries, the Arizona Cardinals gave Bradford a two-year contract worth $20 million, including $15 million in guarantees for the first season. This deal proved to be one of the worst of the entire decade. Bradford played in just three games before being replaced by rookie Josh Rosen, and his numbers were terrible: 400 yards, two touchdowns, four interceptions, and three fumbles.

The Cardinals eventually released Bradford, but not before he made a ton of money from them. During his Arizona tenure, he made $5 million per game played, $7.5 million, and a whopping $300,000 per completion. That season, which turned out to be Bradford's final year in football, summed up his career pretty nicely. He never lived up to the expectations that come with being a No. 1 pick, though he made the money you'd expect a top selection to earn.

Consider this: Bradford's teams never posted a winning record. He also never threw for more than 21 touchdowns or 3,877 yards in a single season. Yet he still retired with $130 million – despite the inconsistencies, you could say he had a very successful career.