Russell Westbrook Exercises His $47 Million Option For This Season

Russell Westbrook has been the brunt of a lot of criticism over his career. From fans calling him "Westbrick" to media sometimes questioning his decision-making, it's easy to cast judgment on the star guard. But two things have remained consistent during Westbrook's 14 years in the league: he has some great interview soundbites, and he plays with a ton of heart.

That competitive work ethic has helped Westbrook earn hundreds of millions of dollars throughout his career, and he's cashing in once again. The star guard exercised his option for the 2022-23 season, which is worth $47.1 million. It's the final season of a five-year, $206 million contract that has made Westbrook one of the wealthiest players in the league. 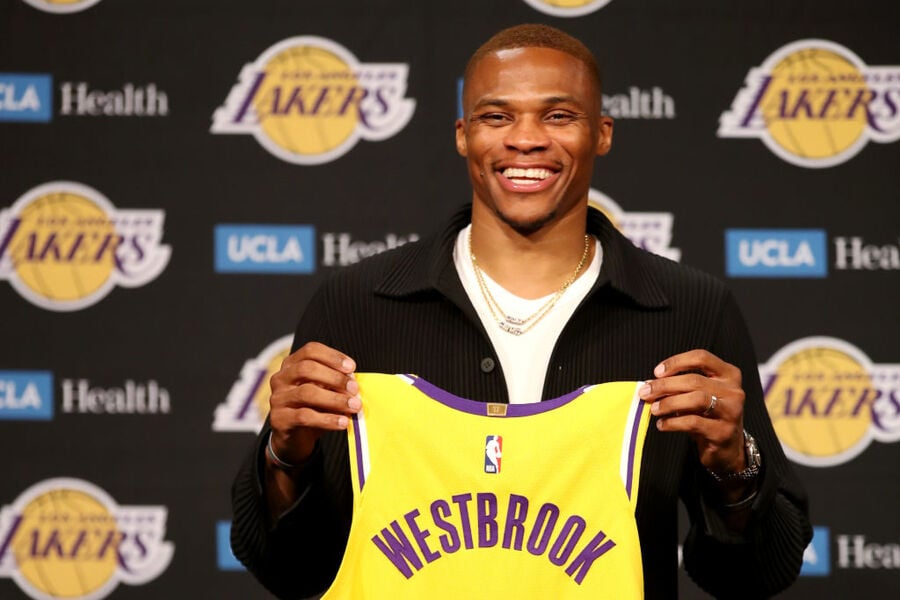 Westbrook won the 2017 NBA MVP and has made the All-Star team nine times. After 11 seasons in Oklahoma City, he's bounced around the league, playing for both the Houston Rockets and Washington Wizards before joining the Lakers. The team struggled last season, finishing with a 33-49 record and missing the playoffs. After averaging a triple-double in four of the previous five seasons, Westbrook had more modest averages last year, including 18.5 points per game — his lowest PPG average since his second season in the league.

With Westbrook opting into the final year of his contract, the Lakers now have $145 million committed to just five players for the upcoming season, including LeBron James and Anthony Davis. That doesn't leave a lot of flexibility to make other sorely needed roster moves.

Despite the opt-in, the Lakers could still very well look to trade Westbrook. The biggest obstacle is his massive salary — very few other players are making anywhere near what Westbrook is, so a team would have to offer multiple players or bring in a third team to pull off a deal.

Westbrook will be 34 by the time this season ends. Next summer, he might not be in line for a max contract, so it's smart to take the $47.1 million now. And if the Lakers can stay healthy and cohesively gel this season, who knows? Maybe Westbrook could be pairing that money with a championship ring.