Outside of the Super Bowl, the NFL Draft might be the NFL's most talked about event. Coverage of the draft happens all year long and really ramps up in the months leading up to the draft itself. And with the Arizona Cardinals kicking things off tonight, one man will take the stage and be in the spotlight plenty of times: NFL commissioner Roger Goodell. Let's take quick look at Roger Goodell's net worth, career history and the total amount of money he will have earned from the NFL by the time he retires in 2021.

Goodell is in his thirteenth year as commissioner. He took the mantle from Paul Tagliabue on September 1, 2006 after winning a close vote against four other finalists. Goodell also serves as the President of NFL Charities.

He starred as a three-sport athlete in high school and was named the Bronxville High School athlete of the year during his senior year. However, injuries prevented him from continuing his football career in college.

Goodell graduated from Washington & Jefferson College in 1981 with a degree in economics, then entered the NFL as an unpaid administrative intern. He continued working his way up the ranks, becoming commissioner a quarter-century after entering the workforce.

Though the NFL has experienced a boom in popularity since the mid-200s, Goodell has certainly had some rocky times since becoming commissioner. The league has seen several controversial topics arise, including player safety, the New England Patriots' Deflategate scandal, and the blatant pass interference that wasn't called in the NFC Championship Game between the New Orleans Saints and the Los Angeles Rams. 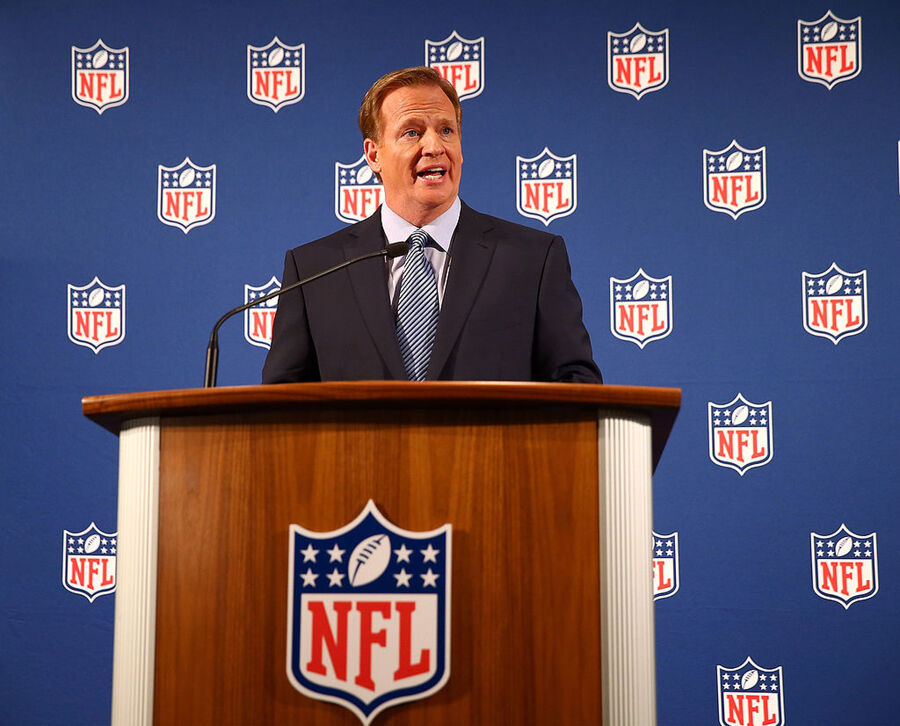 That last one actually resulted in a rule change this offseason, allowing coaches to challenge interference calls. Previously, those penalties were ruled as judgment calls and couldn't be challenged.

After signing an extension in 2017, Goodell is currently under contract up to the start of the 2024 season. He's said it's the last contract he'll sign with the league, which opens up the door for a successor in just two years. Goodell's contracts are highly incentive-based, with this new deal reportedly 90% incentive-laden. The bonuses are tied milestones based on the NFL's financial performance.

During the 2017 contract negotiations, Goodell reportedly pushed for $50 million in annual earnings and lifetime use of the NFL's private jet for him and his family.

He signed a five-year extension in 2012, which was the same season as a four-and-a-half month lockout – remember the replacement refs? During the lockout, Goodell's salary was just $1. That didn't mean he stopped earning money entirely, though.

In total, he's earned $338.7 million as NFL commissioner thus far. By our math, he'll have made $453 million by the time he retires. That's not even taking into account his pre-2007 earnings, which aren't publicly available. With that in mind, Goodell will likely have earned $460 million – nearly half of a billion dollars – by the time he retires in 2021. An astonishing sum for a guy who started out as an unpaid intern!

We'll see what the state of the NFL is in two years. Will there be additional rule changes? Will we have any more scandals? Maybe we'll have a new collective bargaining agreement (something else Goodell has presided over during his tenure).

Whatever the case, there's one thing we know for sure: it pays to be commissioner.