Is Robert Griffin III Going To Be The Next $100 Million Man?

By Travis Pulver on August 7, 2015 in Articles › Sports News

The Washington Redskins have a rough year ahead of them, and not just because they play in the very tough NFC East. At some point in the near to distant future, the front office is going to have to make a very hard decision involving quarterback Robert Griffin III.

Is keeping him going to be worth $100 million?

The new benchmark for quarterback contracts appears to be $100 million these days, whether they are good quarterbacks with a proven track record or not. If you asked anyone after his rookie season, they would have given an emphatic yes for an answer. However, since then he has struggled to recover from the knee injury that ended his rookie season and has looked nothing like the guy he was his rookie season.

Over the course of his career, he has compiled a record of 14-21 in 35 regular season starts. His completion percentage is pretty decent (64.7), and he is a legitimate running threat with 1,480 yards. As nice as that stat is, it is a little deceiving since over half of it came during his rookie campaign (815).

Since his rookie season, he has appeared indecisive at times, doesn't know when to get rid of the ball, and takes too many hits. He hasn't really been the kind of guy you want to bank on for the immediate future of the team.

That is exactly why the team went ahead and picked up the fifth year option on his rookie contract. Now they don't need to feel pressured to make a deal this year, but instead can wait till next off-season before they really need to. They will likely want to extend him before the '16 season, since he will be an unrestricted free agent after the season.

When they do, putting a value on him may be tough. He hasn't played well, nor has he won many games. However, that did not stop Carolina from turning Cam Newton into a $100 million man, Chicago from paying Jay Cutler $126 million, or Cincinnati from making Andy Dalton a $96 million man. 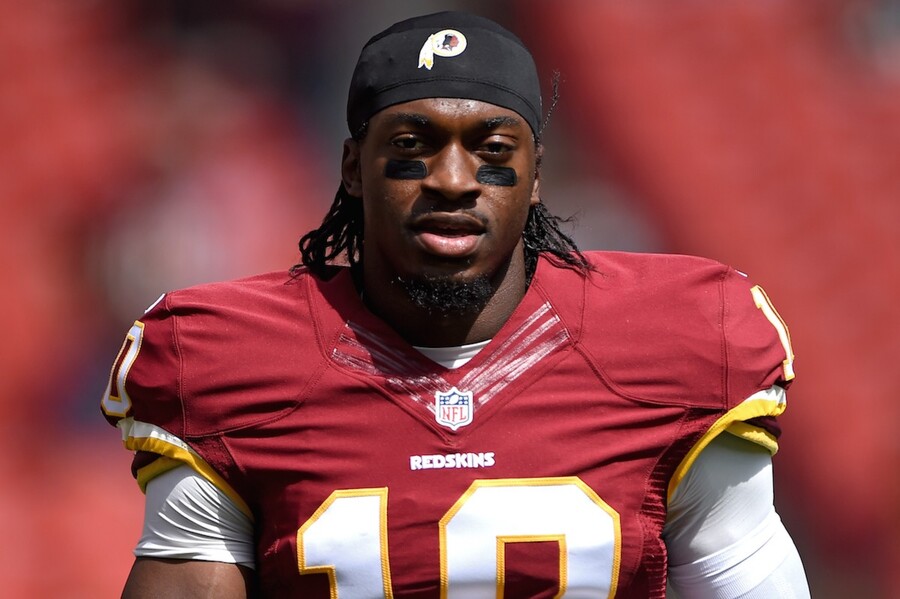 Actually, the $100 million man moniker is a little misleading. A $100 million deal could actually work well for Washington if they can get it for six or seven years, but that is unlikely. The real magic number now is the salary per year. When Russell Wilson's agent was negotiating his deal he pushed to make his client the highest paid QB in the league, but the Seahawks would only give Wilson $21.9 million/season (not $22 million like Aaron Rodgers).

Comparing talent level can certainly be something that can be argued, as can the quality of skilled players surrounding each respective quarterback. The Lions and Stafford look good now, but when he signed his deal the Lions were coming off of a 4-12 season when they extended Stafford and guaranteed him $41.5 million.

Stafford's track record prior to getting his extension was comparable to Grifffin's (2-14, 6-10, 10-6, 4-12). Does that make Stafford's contract the one Washington should look at when it comes time to extend RG3?

That would actually be a pretty smart idea. The Lions gave Stafford a three-year deal worth $53 million with a $27.5 million signing bonus and $41.5 million guaranteed. It pays him well without going crazy, and if he doesn't step up within three years they can look elsewhere.

RG3 has tons of promise. So far during training camp the team has tried to impress upon him that he does not need to be Superman; he does not need to do it all. He just needs to be able to lead the other 10 guys on offense and figure out how to get the most out of them (with the help of the coaches). Should he do that while turning in his own A+ effort the Redskins could actually win a few games.

The good thing is the team has at least another year before they have to decide to do anything. They could actually wait two years if they wanted to. Maybe if he puts two solid season together that will be enough to give him a long term deal.

At the least, he will likely get one similar to Stafford that allows the team to continue to see how well he develops without having to be married to him long term.

There's nothing wrong with being a $50 million man.