Ricky Williams Might Have Had The Worst Contract In NFL History

Sometimes, a player signs a contract where they're making a lot more than the general public would expect. Other times, a team manages to get a player on a bargain of a contract, making it a great deal for the team. And occasionally, you'll get a contract that's so questionable, you wonder how it ever saw the light of day.

Ricky Williams signed a contract like that coming out of college with the New Orleans Saints. In fact, it's often referred to as the worst contract in NFL history.

The contract itself was worth up to $68 million, but a large part of reaching that dollar amount relied on Williams achieving certain performance levels. Take a closer look at some of the incentives, though, and you'll realize even the top running backs in NFL history would have a difficult time reaching certain milestones. 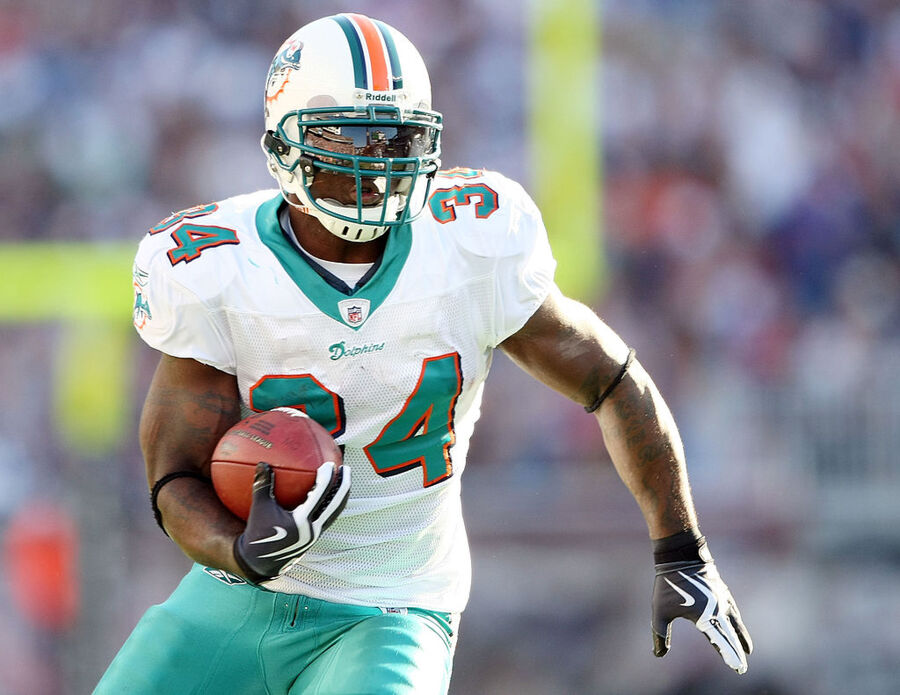 Williams bet on himself with his deal, taking a large signing bonus with the minimum salary each year. On salary alone, the contract only paid $2.275 million over six years, with a player option for the seventh year, plus a signing bonus of $8.8 million. That's pretty terrible no matter how you slice it, and Williams wasn't able to reach the lofty goals of his NFL contract. While he did rush for more than 10,000 yards during his career, he had only one Pro Bowl Season in 2002, his first year with the Miami Dolphins after the Saints traded him. He retired for a season in 2004 after a failed test for marijuana, and after returning the following year, missed the entire following season when he failed another test.

Due to his retirement, the Dolphins sued Williams to get some of that signing bonus back. He also had to return some of it when he returned in 2005.

FiveThirtyEight did a terrific deep dive into Williams' contract – here's a look at the "Special Provisions" section of the deal, a list of 26 incentives worth $50,000 each, as well as how attainable each incentive was, based on the performances of running backs since 1989:

While a few of these incentives were fairly achievable, some of the ones at the bottom are nearly impossible – 11 of them are achieved by fewer than one running back per year – and a pair have never happened. And some were even out of Williams' control. He could break a rushing record and run for 300 yards in a playoff game, but if the Saints or Dolphins didn't win, he had no chance to be Super Bowl MVP. And a goal of 12 receiving touchdowns is more than any running back in modern history has reached; three different backs have managed nine receiving scores.

On top of all of that, there was a limit to the amount of money Williams could make in bonuses: $500,000. He only "maxed out" by hitting 10 incentives once, during his lone Pro Bowl season in 2002. Had Williams reached 10 incentives in each of his first seven seasons, he still would have just made $3.5 million, not even half the amount of his signing bonus.

Here's the thing, though: it's not easy to run for 1,600 yards. LaDainian Tomlinson and Barry Sanders, among the best backs in the past 30 years, only reached that mark three and two times, respectively. They each would have only made $3.5 million via performance bonuses if they had Williams' contract. Williams did it just once during his career, again, during his breakout 2002 season. Last year, no NFL running back even broke the 1,500 rushing yard threshold. Here's a look at everyone who's achieved at least 1,600 yards on the ground since 1989:

Again, the more you dive into Williams' contract, the worse it seems. The top two performance bonuses are all but impossible, as Dickerson is the only player in NFL history to surpass 2,100 yards. Even if a player somehow broke his record, that player would have to consistently top 2,106 yards (or whatever the new record was) in order to keep making $3 million each year. Considering zero players have achieved that since Dickerson, Williams was playing against a stacked deck.

However, there was one other way Williams could make additional money, and it involved a running back who was among the hottest in the league at the time.

Terrell Davis was the MVP of both the 1998 season and Super Bowl XXXII, and appeared poised to continue his strong career. To that point, through four NFL seasons, Davis had amassed 6,513 rushing yards, 7,594 yards from scrimmage, a 4.8-yard rushing average with a minimum of 100 attempts per season, and scored 366 points.

Williams could supposedly reach $39 million – though it likely would have been somewhere between $15 million and $25 million – for the final three years of his contract if he could attain three of the above four milestones during his first four years in the league. To put it bluntly, Williams didn't even achieve one of them. Outside of Davis, Emmitt Smith, Barry Sanders, and Marshall Faulk are the only running backs to hit Davis' performance levels.

Williams was pretty good, but those four might have been the best backs of the late 90s and early 2000s. The Saints (and later Dolphins)

had high aspirations that turned out to be virtually impossible to reach…for anyone. The below chart is an estimate of how much running backs could have earned at their best seven-year stretch.

Even when picking the seven prime years for each of these players, none of them came close to $68 million. Had Williams played the entire seven years of his contract, he would have racked up $14 million, barely 20 percent of his max.

The NFL already has the worst contract structure for players of the major four North American sports, with non-guaranteed salaries in a violent, contact-heavy game. While players like Williams can be applauded for their confidence, they really should be trying to get as much guaranteed money as possible. Too much can go wrong when incentives start being added in.