Turning Down $120 Million Might Come Back To This Pitcher

Pitching is always at a premium in the big leagues. How often do you see teams stockpiling prospects, only to send a handful of them away in a trade for an established ace?

Johnny Cueto is no stranger to that – after all, the struggling Reds dealt him at the trade deadline this past season to the Kansas City Royals. Cueto won a World Series ring with the Royals, pitching fairly well against the Mets after having a brutal two-inning, six-hit, eight-run outing in the prior series with the Blue Jays. In the regular season with the Royals, Cueto went 4-7, with a 4.06 ERA and the highest WHIP (1.45) and second worst K/9 rate (6.2) of his career.

That doesn't exactly instill confidence, but Cueto is only a year removed from finishing second in the NL Cy Young voting. He believes he can still pitch at a high level, and perhaps more importantly, he's looking around at the rest of the league. David Price just signed the biggest deal for a pitcher in league history. Jordan Zimmerman inked a contract with the Detroit Tigers, and Zack Greinke followed up a near Cy Young-season by agreeing to a huge deal with the Arizona Diamondbacks.

That last one may have changed Cueto's thinking a bit, as he turned down a six-year, $120 million deal from those very same Diamondbacks. Cueto has been in the league for nine seasons and hasn't even made a third of that yet. Is he crazy to turn that kind of deal down, or will he prove to be a shrewd negotiator?

It's easy to see why he'd turn down that money. So far this off-season, baseball teams have already spent more than $800 million on pitching. And while Cueto relies on his fastball most of all, he actually has six different pitches he can use to get hitters out. His changeup, for instance, resulted in batters hitting just .209, with 57 strikeouts in 177 at-bats where that was the final pitch.

He also led the National League in 2014 in innings pitched with 243.2, and had 242 strikeouts. He's also averaged more than four wins against replacement player (WAR) each of the past two seasons. That means that if he was replaced by a league average player, the Royals could expect to win four fewer games. There's reason to be optimistic. 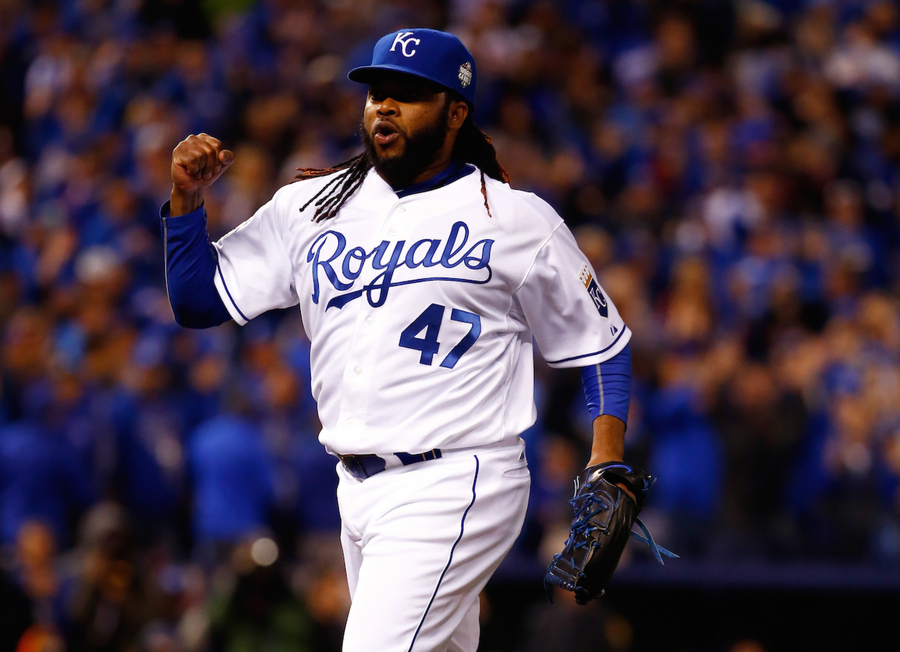 On the other hand, Cueto hasn't exactly been the picture of health. He's missed significant time in three of the past six seasons, and each time it was because of a shoulder injury. It's one thing to simply miss time to a variety of ailments, but when it's the same issue, consistently, that's cause for concern.

A few years ago, a win was calculated to be worth just a bit over $7 million. It's reasonable to expect Cueto's WAR would decrease, and would continue to decrease as he gets older, so let's say he's averaging 3.6 WAR this upcoming year (current projections actually have him at about 3.0 WAR, so we're being generous here). That leaves him at a valuation of $25.2 million for the coming season.

Over the course of six years, that puts him at about $151 million–IF he stays healthy and doesn't decline at all. History isn't on his side, as players generally start getting worse once they're past 30. Cueto is 29. As they don't play every day, pitchers can maybe milk an extra couple years out of their careers, but it's still a lot of wear and tear being put on those arms.

Accounting for a decline in ability over the next six years, Cueto's worth actually comes pretty close to what he turned down from Arizona: $124 million.

Cueto is counting on himself to get back to and maintain the level of play that nearly won him a Cy Young on 2014. Now he just needs a team to believe that, too, and he can cash in for a big payday. If not, he may be wishing he took that offer from the DIamondbacks after all.