OJ Simpson Net Worth: Everything You Need To Know About The Juice's Finances As He May Be Paroled

As you may have heard, on Thursday July 20, O.J. Simpson will face a Nevada parole board to learn if he will be set free after being behind bars for nearly nine years. If the parole board rules in his favor, 'The Juice' would be loose on October 1st 2017. As a refresher, Simpson has been serving a 33-year sentence stemming from an incident that took place in a Las Vegas hotel room in September 2007. Allegedly, OJ and three associates burst into a hotel room with guns and stole various OJ-related sports memorabilia from a dealer named Bruce Fromong. OJ was arrested and eventually convicted of robbery, kidnapping, coercion and conspiracy after all three of his associates took plea deals and testified against Simpson. But OJ claims he was just retrieving personal belongings that rightfully belonged to him in the first place. He also claims that his former lawyers in the case botched his trial and that he was unfairly persecuted because of bias still leftover from his 1995 murder acquittal.

So, if O.J. is released in October, what will be his personal financial situation? I mean, he hasn't really worked very much in the last 22 years. Plus doesn't he still owe the Goldman family $33 million? What was OJ's peak net worth and current net worth? Let's take a quick dive into the financial situation of OJ Simpson. 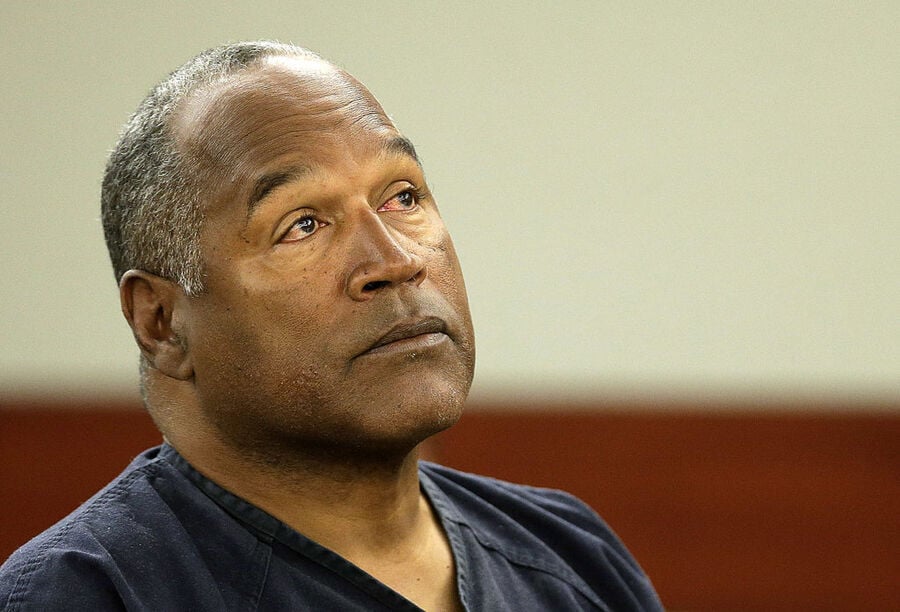 First let's examine OJ Simpson's net worth before he got into any trouble:

When OJ and Nicole divorced in 1992, he estimated his net worth to be $10.8 million. That's the same as around $18 million today. Around half of his net worth came from the value of his Brentwood estate. He bought that estate in 1977 for $650,000 (roughly $2.5 million in 2016 dollars). According to the settlement terms of their divorce, OJ's monthly income in 1992 was $55,000. The majority of that income came from his Hertz endorsement contract. That's the equivalent of $92,000 per month after adjusting for inflation, roughly $1.1 million per year today. To settle the divorce, OJ agreed to pay Nicole $10,000 per month in child support plus a one-time payment of $433,750 ($730,000 after adjusting for inflation). OJ also gave Nicole a rental property in San Francisco. OJ continued to live in his Brentwood mansion until he was evicted in 1997 after defaulting on the mortgage. The 6,200 square foot house was bought in foreclosure for $4 million and demolished in 1998.

As we all know, in 1994, Simpson was charged with the murder of ex-wife Nicole Brown and her friend Ronald Goldman. His trial was one of the most publicized trials in American history, and ended in a not-guilty verdict. He was subsequently convicted in a civil trial and was ordered to pay $33.5 million in damages to the Goldman and Brown families. To date, he as paid approximately $500,000 of those damages and after interest the total amount owed is now supposedly more than $40 million. Any money OJ earns after he is released from prison will be garnished by the Goldman family. But there is an exception!

OJ Simpson Net Worth today: After he turned 55, OJ was eligible to receive a pension from the NFL. It's widely believed that OJ actually held off on taking his pension payments until he was 65 so he could receive a larger monthly payment ($10,565 per month instead of $4,034). Assuming this is true, the NFL began paying him $10,565 per month starting in 2012. Since he could not access or use this money while he was in prison, approximately $602,000 would have built up in OJ's bank account. According to one of his close friends, OJ also reportedly has a fully funded personal pension that is worth anywhere from $2-5 million depending on how the assets were invested and performed. He also reportedly has a Screen Actor's Guild pension that pays around $1700 per month. Luckily for OJ, pension income can not be touched by bankruptcy or legal judgment so it's completely off limits to the Goldman family. For this reason, today we estimate that OJ's current net worth is somewhere in the range of $3 million. It could be a bit higher or lower depending on how his pension funds have been managed over the last decade.