Odell Beckham Jr. had a torrid start to his NFL career. In his first three seasons with the New York Giants, he grabbed 288 catches for 4,122 yards and 35 touchdowns. Since then, he's suffered a handful of injuries, and his on-the-field production hasn't been as consistent. Luckily, he signed a five-year, $95 million with the Giants in 2018, including $65 million guaranteed. Even after the team traded him to the Cleveland Browns, he still earned millions.

Perhaps that's why Beckham got creative with his most recent deal. After the Browns released him in 2021, the Los Angeles Rams signed the receiver to make a run at a championship. The Rams offered Beckham a $750,000 contract, which he decided to convert to Bitcoin.

This was about a year ago. At that time, one Bitcoin was worth $64,293. Beckham's $750,000 would be worth about 11.66 Bitcoin. And just like American dollars, Bitcoin gets taxed at the highest rates once you earn a certain amount of money. Factor in 50.3% in taxes (a 37% federal rate and 13.3% California tax rate), and his salary is basically cut in half. 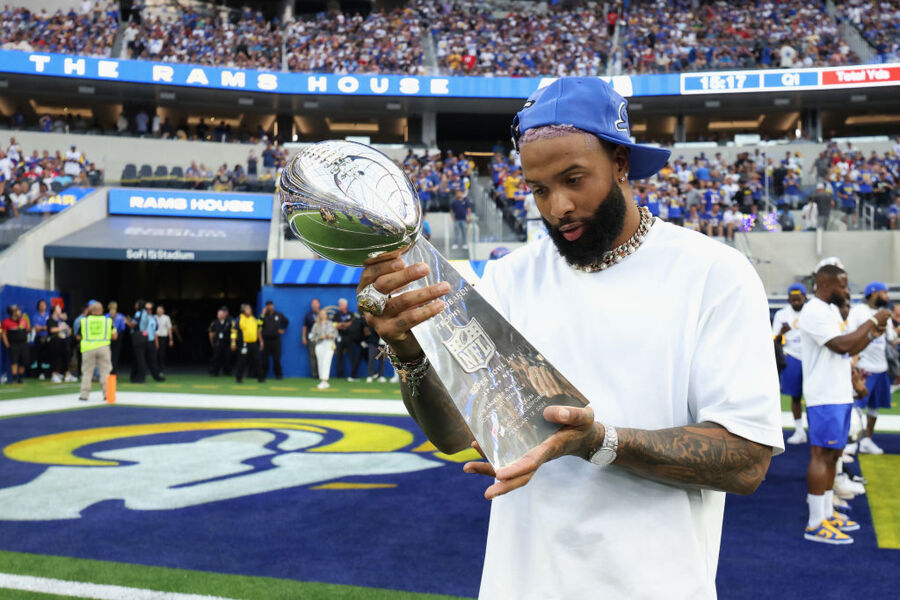 Since then, Bitcoin, like much of the stock market, has taken a precipitous fall from grace. As of the writing of this article, Bitcoin is worth $17,088. That means Beckham's $750,000 pre-tax deal is currently worth $199,246, or about 26.5% of the value of his initial deal. It also means his Rams contract cost him $173,504. Of course, the Rams won the Super Bowl last year, so Beckham is now an NFL champion. That's certainly not a bad consolation prize.

Beyond that, if Beckham still has that Bitcoin, he'd be silly to sell it now. Cryptocurrency has fallen before, only to rise to new heights. It's possible—maybe even likely—that it happens again.

Beckham has also made more than $82 million in career earnings, even factoring in the loss of his Bitcoin deal. He's not exactly hurting for money, and this is a creative way to diversify. Plus, he's only 30 years old and still a talented receiver, despite two ACL injuries over the past three seasons. He'll likely ink a deal with a championship contender. In fact, the longer Beckham waits to sign, the higher his contract will likely rise when teams become more desperate for receivers as injuries pile up.

If he plays his cards right, Beckham could sign a deal that makes us forget about the Bitcoin contract. We just hope he doesn't go after a meme coin this time.