NCAA Tournament Final Four: Houston vs. Baylor — How Did Kelvin Sampson And Scott Drew Get Here?

The men's NCAA Tournament Final Four is upon us, and both matchups offer plenty of intrigue. College basketball's semifinals feature four recognizable programs in Houston, Baylor, Gonzaga, and UCLA, though their histories have all taken wildly different paths.

You can find more about the Gonzaga and UCLA matchup here. On the other side of the bracket, we've got an intra-Texas battle between Houston and Baylor.

The Cougars were a dominant force in the 1980s. Led by future NBA Hall of Famers Hakeem Olajuwon and Clyde Drexler, the Phi Slama Jama team largely popularized the above-the-rim style of play of today's game. Those Cougars made three straight Final Four appearances from 1982 to 1984, but the team lost in both the 1983 and 1984 championship games. This year is the first time the program has been back to the Final Four since the Phi Slama Jama crew.

If you think 37 years is a long time, check out the Baylor Bears, who are making their first NCAA Final Four appearance since 1950. Some of the grandparents of today's Bears players weren't even born yet. Over the past decade, the Bears have been regular tournament mainstays, though they've suffered a few massive upsets, including one against Georgia State — where Panthers coach Ron Hunter fell off his stool — and one against Yale, which featured perhaps the best post-game interview clip ever.

Baylor as a university has seen success with their women's team — the Baylor Lady Bears won the 2012 and 2019 championships and are routinely among the top teams in the country. But, like the Cougars, the Bears men's team has never won it all.

It should be a great matchup between two squads with fairly contrasting styles. How did Houston head coach Kelvin Sampson and Baylor head coach Scott Drew get to where they are today? 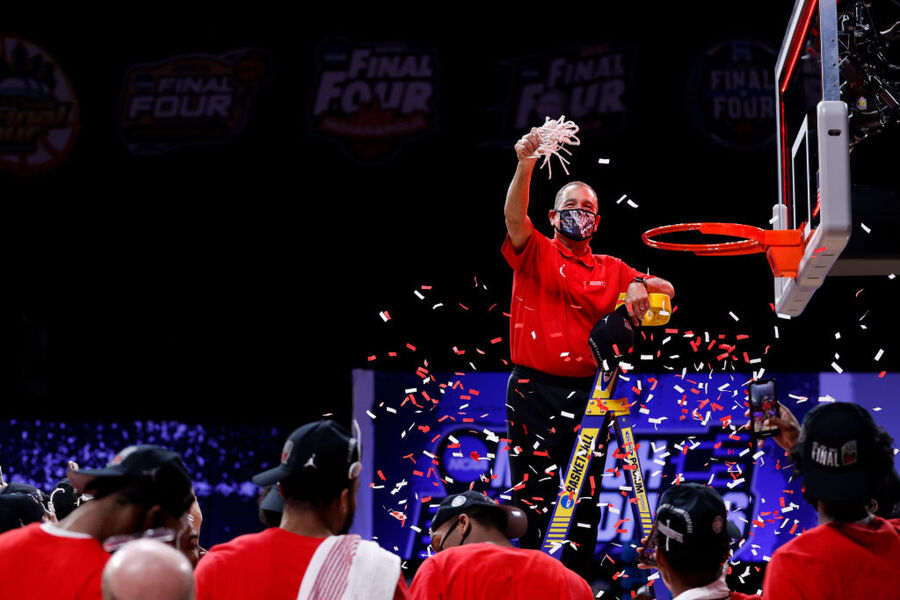 Kelvin Sampson grew up in Pembroke, North Carolina. He attended Pembroke High School and was a guard at Pembroke State University (which today is called UNC Pembroke). Sampson spent a year getting his master's degree in coaching and administration at Michigan State University. His stay included one year as an assistant to coach Jud Heathcoate, setting the foundation for Sampson's coaching career.

Upon leaving Michigan State, Sampson took an assistant coaching position at Montana Tech, an NAIA school. With the Orediggers, Sampson quickly became the interim and then head coach. Before Sampson, the team won a combined 17 games in three seasons. With Sampson leading the way, the team won three Frontier Conference championships and finished with a 71-45 record over four seasons.

In 1985, Sampson moved up to the NCAA ranks with an assistant coaching position at Washington State, becoming head coach two years later. Though he ultimately finished with a .500 record (103-103) in seven seasons, Sampson accomplished several milestones with Washington State. He was named Pac-10 Coach of the Year in 1992 and in 1994, he led the school to the NCAA Tournament, ending an 11-year drought.

In 1994, Sampson took over as head coach at the University of Oklahoma. In his first season, he was named the AP Coach of the Year. He led the Sooners to nine straight seasons of at least 20 wins and has the best winning percentage (.719) of any coach in program history. The Sooners won the Big 12 championships in 2001, 2002, and 2003, reaching the Final Four in 2002. During his Oklahoma tenure, the school received a three-year investigation for recruiting violations.

When Mike Davis resigned at Indiana in 2006, Sampson took over as the Hoosiers head coach. Sampson called it one of the few jobs he'd leave Oklahoma to take. His time with the Hoosiers was short-lived, though.

After leading the team to the NCAA Tournament in 2007, Sampson resigned in February 2008 after numerous NCAA violations came to light. Most notably, Sampson made impermissible phone calls to recruits and lied to Indiana and NCAA officials about his involvement. Sampson also played a role in the controversial recruitment of star player Eric Gordon. However, despite reportedly hiring people close to Gordon and getting the recruit to back out of a verbal commitment to Illinois, none of what Sampson did was technically illegal.

Still, the recruiting violations caused the NCAA to impose a five-year show cause on Sampson, essentially blackballing him from the sport for five years.

While serving that show cause, Sampson spent time as an assistant coach for both the Milwaukee Bucks and Houston Rockets.

After the penalty expired, the Houston Cougars hired Sampson, who pushed for a new practice facility and renovations to the Cougars' home court.

Sampson led the Cougars to a 33-4 season in 2019, which included an appearance in the NCAA Sweet 16. After the cancellation of the 2020 tournament due to the coronavirus pandemic, the Cougars are 28-3 entering the Final Four and received a 2-seed in the 2021 NCAA Tournament. Houston became the first team to reach the Final Four by playing all double-digit seeds.

Sampson agreed to a six-year, $18 million contract extension in 2019, so he made $3 million this year. To lead the Cougars to a championship, he'll have to get past a fellow Texas school.

Unlike Sampson, Baylor head coach Scott Drew has only ever been a head coach at two schools. But he spent plenty of time around the game before then. Though he didn't play college ball, he served as a student manager for the Butler Bulldogs, and after graduating, he took a job under his father, Homer Drew, at Valparaiso University.

Drew spent a decade with the Crusaders. For nine years, he worked as his father's assistant, quickly gaining a reputation as one of the nation's top recruiters. His friendly demeanor and engaging personality helped him meet new players, and even though he was still an assistant, word was spreading about the younger Drew.

When Homer retired in 2002, Scott took over as Valparaiso's head coach. The Crusaders had the best regular-season record in the Mid-Continent Conference, but lost in their conference tournament and missed the NCAA tourney, settling for an NIT bid instead.

Drew didn't remain as the head coach at Valparaiso for long, however. During the summer of 2003, the Baylor Bears men's basketball program experienced a tragedy that unveiled multiple scandals throughout the program.

Baylor forward Patrick Dennehy disappeared; his body was later discovered and his teammate Carlton Dotson was found guilty of murdering him.

After Dennehy's death was ruled a homicide, it was revealed that former Baylor head coach Dave Bliss had secretly paid part of Dennehy's and another teammate's tuition. Other violations, including recruiting violations and drug use, caused the NCAA to impose harsh sanctions on the Baylor program.

The university was put on probation until June 22, 2010. Among the limitations: fewer paid scholarships and paid recruiting visits, the team couldn't play any non-conference games during the 2005-06 season, and postseason play was canceled for the 2003-04 season.

Drew took the job in late August after Bliss resigned. Drew was already coming in later than most new coaching hires, and most of Baylor's top players had transferred. As a result, the school only won 21 total games in his first three seasons.

But the university believed in Drew, and once he was able to bring his own recruits in, the school started seeing its fortunes turn around. During the 2007-08 season, Drew led the Bears to a 21-9 record, making their first NCAA Tournament appearance in 20 years.

The school continued to improve; Baylor reached the Elite Eight in both the 2010 and 2012 NCAA Tournaments.

Last year, the Bears had their best season in school history, finishing 26-4. They were certainly a national title contender before the 2020 tournament was canceled. With several players returning, Drew and the Bears put together an even better season this year. Entering the Final Four, they're 26-2.