Back in 2015, Dikembe Mutombo made an appearance in the first NBA game in Africa, where a roster full of African NBA players took on "Team World." When he stepped onto the court with fellow former pro Hakeem Olajuwon, the crowd gave a standing ovation. It's certainly justified; after all, Mutombo, who has a net worth of $75 million, was elected into the Basketball Hall of Fame this year. He's an eight-time All-Star, four-time Defensive Player of the Year, three-time NBA blocks leader, and two-time NBA rebounds leader. In fact, he's second all-time in the league in career blocks. But if you take a look at what Mutombo has done off the court, you would get out of your seat and applaud, too.

Dikembe Mutombo was born on June 25, 1966 in Kinshasa, the capital of the Democratic Republic of Congo. He attended Georgetown University on a United States Agency for International Development scholarship, and though at the time he spoke no English and had barely played basketball, he soon became a fan favorite for his propensity to block shots. He made the most of his position, knowing he was in a rare spot. He served as a summer intern, once for the United States Congress and once for the World Bank. In 1991, he graduated with bachelor's degrees in linguistics and diplomacy.

Of course, during his professional career, he was also well-known for both his flailing elbows and wagging his finger after blocking a shot. Mutombo initially would point his finger at his opponent, and he received a technical foul each time he did, so he changed his process to wag his finger to the crowd. Not only did this move avoid a technical foul, it played to the crowd, getting the fans fired up and on Mutombo's side. Throughout his time in the NBA, he played for the Denver Nuggets, Atlanta Hawks, Philadelphia 76ers, New Jersey Nets, New York Knicks and Houston Rockets and finishing with 9.8 points, 10.3 rebounds and 2.8 blocks per game over 18 seasons. 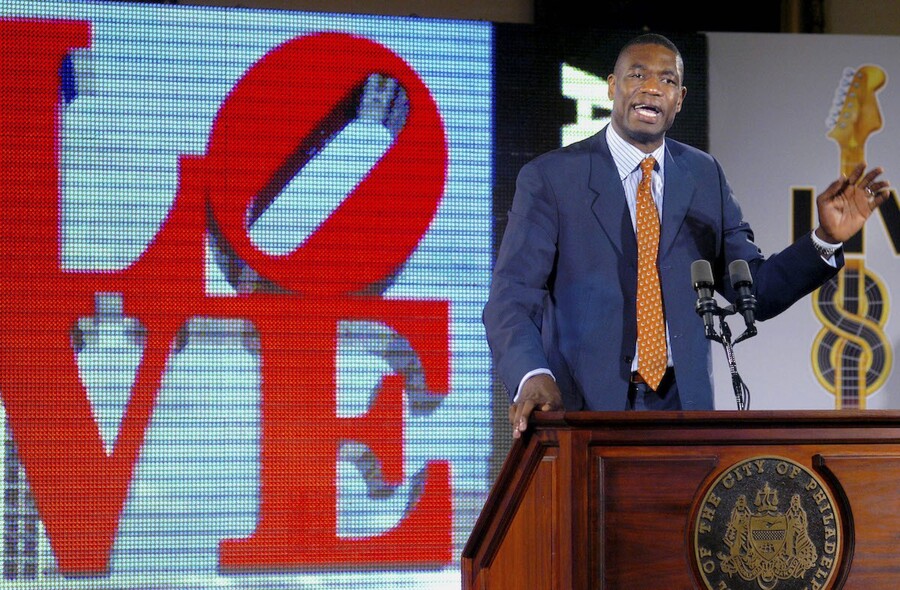 PHILADELPHIA – MAY 31: Mayor John F. Street, musician Dave Matthews, athlete Dikembe Mutumbo and others to hold during a news conference to announce the upcoming Live Eight concert to raise money to aid Africa May 31, 2005 in Philadelphia, Pennsylvania. Photo by William Thomas Cain/Getty Images.

Mutombo's humanitarian efforts earned him the NBA's J. Walter Kennedy Citizenship Award in 2001 and 2009, and in 1999, he was elected as one of 20 winners of the President's Service Awards, which is the nation's highest honor for volunteer service.

In 1997, Mutombo started the Dikembe Mutombo Foundation. Troubled by seeing people needlessly losing their lives from curable diseases, Mutombo worked to improve living conditions in his home country. By 2007, he had opened a hospital in Kinshasa. The Biamba Marie Mutombo Hospital (named after Mutombo's mother) is a 170-bed facility that cost $29 million to build. Mutombo donated $8 million of his own money, and helped raise additional funds from fellow NBA and Georgetown centers Patrick Ewing and Alonzo Mourning, among others. It's the first new hospital in the area in 40 years.

Back in 1994, Mutombo, Mourning and Ewing took a trip to Cape Town, South Africa. Mutombo, who towered over the kids he spoke to, gave motivational speeches about achievement and built basketball courts. He continued touring Africa, speaking to youths to encourage positive social change in education, health and wellness and working to spread basketball's message, participating in the Basketball Without Borders NBA program in 2004 with other NBA stars. Mutombo has been a spokesman for the program ever since. During the 1996 Olympic Games in Atlanta, he paid for uniforms and expenses for the Zaire women's basketball team. In addition, Mutombo is a spokesman for the international relief agency, CARE, and is the first Youth Emissary for the United Nations Development Program.

Mutombo has been a longtime supporter of the Special Olympics. Currently, he's a member of the Board of Directors and a Global Ambassador. He's been a pioneer of Unified Sports, bringing together those with and without intellectual disabilities.

In 2012, the Mutombo Foundation, partnering with Georgetown, began a new initiative that aims to provide care for visually impaired children in low-income families in the Washington, D.C. region.

Mutombo's list of contributions and awards is seemingly endless: he's active with Hughes Spalding Children's Hospital Christmas toy drive, Hosea Feed the Hungry and the Atlanta Community Food Bank. He's on the Advisory Board for the Fogarty International Center at the Institutes of Health. He received the 32nd Annual Thurman Munson Award, the Big Brothers Big Sisters New York City Achievement in Public Service Award, the Steve Patterson Award for Excellence in Sports Philanthropy, and the John Thompson Jr. Legacy of a Dream Award. He's also a graduate of Leadership Atlanta 2014. In 2011, Mutombo was awarded the Goodermote Humanitarian Award from the Johns Hopkins Bloomberg School of Public Health "for his efforts to reduce polio globally as well as his work improving the health of neglected and underserved populations in the Democratic Republic of Congo."

While at Georgetown, Mutombo had initially wanted to become a doctor, but his coach John Thompson encouraged him to pursue a basketball career. Thompson said Mutombo could save and impact lives in a different way, and Mutombo has taken advantage, investing more than $200 million in social innovation to improve health and literacy, and is striving to end human and sex trafficking in both Africa and America.

People who didn't see Mutombo play, may recognize him from Geico commercials a few years back, where he callously rejected people shooting everyday items, like a crumpled up piece of paper into a garbage can or a box of cereal into a shopping cart. Others may remember when he lent his voice to one of the weirdest online games to help promote Old Spice. Hopefully more people will start recognizing his humanitarian efforts, because they're truly spectacular.