It's hard to find a better boxer than Mike Tyson at his peak. He reigned as the undisputed world heavyweight champion, winning his first 19 professional fights by knockout. He also holds the record for the youngest boxer to win a heavyweight title, doing so when he was just 20 years, four months, and 22 days old. In total, Tyson won 50 of his 58 fights, with 44 coming by KO.

It's no secret Tyson lived lavishly, and when you see his total earnings, you can see why he spent so freely. He earned a total of $413 million over his 20-year career, yet still filed for bankruptcy in 2003, reportedly with about $23 million in debt.

Nevertheless, the former heavyweight champ had some huge fights throughout his career. Here's a look at Tyson's top five paydays, adjusted for inflation.

In 1991, Tyson was arrested on rape charges and then convicted the following year. He spent three years in prison before making a return to the ring. Billed as "He's Back," the matchup against little-known Peter McNeeley was Tyson's first fight in more than four years.

The fight earned a then-record $63 million in Pay-per-view (PPV) buys, but didn't even last for a minute and a half. Tyson dropped McNeeley to the canvas twice; after the second time, McNeeley's manager Vinnie Vecchione stepped into the ring to prevent his fighter from sustaining any additional damage. As a result, McNeeley was disqualified, and Tyson won in just 89 seconds.

This was Tyson's first-ever PPV fight. Both men were undefeated and each were in a great position to be the heavyweight champion. Tyson already held title belts in the World Boxing Council, World Boxing Association, and International Boxing Federation.

At the time, the fight was the richest fight in boxing history, grossing about $70 million. Much like the fight with McNeeley, Tyson made quick work of Spinks. Butch Lewis, Spinks's manager, noticed a bump in Tyson's gloves and demanded his hands be rewrapped. Angered by the delay, Tyson reportedly told his trainer "you know, I'm gonna hurt this guy" en route to the ring.

Tyson immediately jumped onto Spinks, attacking him with multiple punches and dropping Spinks to the canvas. Spinks rose, but a left-right combination to the head dropped him once again. He wouldn't rise this time, giving Tyson the victory by knockout after just 91 seconds. 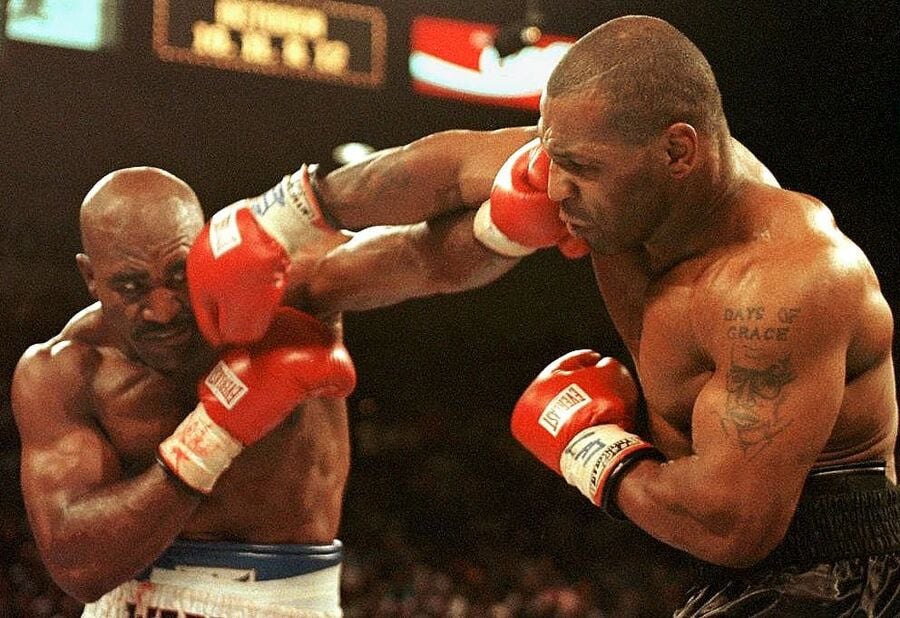 In the span of fewer than ten months, Tyson had three fights that grossed him nearly $100 million at the time. The first bout, a match against Bruce Seldon, was for the WBA Heavyweight championship. Tyson felled Seldon in just one minute and 49 seconds, earning the victory by technical knockout (TKO). Perhaps even more notable than the fight was the presence of Tupac Shakur in the crowd. The rapper was shot just hours after leaving this event, dying six days later.

At this point in his career, Tyson was 45-1. But it would be more than three years until he won again. His next two bouts were against Evander Holyfield, the first in an attempt to defend his WBA title. Holyfield was in the midst of his own comeback tour, having retired in 1994, though he was given almost no chance to win by most commentators and spectators. Instead, Holyfield won by TKO in the 11th round.

The following summer, on June 28, 1997, Tyson and Holyfield had their rematch, billed as The Sound and the Fury. Holyfield actually received more money than Tyson for this fight ($35 million to $30 million) and it scored 1.99 million PPV buys, which was a record for more than a decade.

This fight quickly became one of the most controversial sporting events of all-time. Tyson bit Holyfield's ears twice, the first bite being aggressive enough to remove a piece of cartilage from Holyfield's right ear. Tyson claimed the bites were in retaliation to Holyfield headbutting him without penalty. Nevertheless, referee Mills Lane stopped the match after the third round, disqualifying Tyson and awarding the victory to Holyfield. It was the first time in more than 50 years a heavyweight fight had ended in disqualification. Tyson received a permanent suspension from boxing and had his license canceled indefinitely. That move was overturned just over a year later.

Today, Tyson and Holyfield are close friends. But their rivalry in the mid-90s was one of the most intense the sporting world has ever seen.

Tyson had fought against Frank Bruno seven years earlier, with the undisputed world championship on the line. Tyson won that bout, but Bruno would get another crack at him here, for the WBC championship. Unfortunately, the rematch was even quicker for Bruno. Tyson gave Bruno a cut over his eye in round one, and early in the third round, Tyson delivered a 13-punch combo that ended the match on a technical knockout.

The fight proved to be the last one of Bruno's career. He was interested in a potential third fight with Tyson but was warned he could lose his vision in one eye if he kept fighting. As a result, Bruno retired from boxing entirely.

One of the final fights of Tyson's career, this bout with Lewis was several years in the making. Lewis turned down a guarantee of $13.5 million to fight Tyson in 1996, and he then accepted $4 million to step aside and let Tyson fight Seldon. By the time Lewis and Tyson fought in 2002, Lewis already held the WBC, IBF, IBO, and Lineal titles.

From the start, tensions were high between the two fighters. Tyson and Lewis got into a brawl during their press conference, with Tyson biting Lewis's leg and yelling profanities at multiple reporters. The fight started off evenly matched, but as the rounds wore on, Tyson began to weaken, eventually sustaining cuts over both of his eyes, as his face swelled throughout. In Round 8, Lewis unleashed a heavy right cross, knocking Tyson to the canvas for the second time in the round. Tyson lay on his back as he was counted out, giving Lewis the victory by KO. Tyson would fight just three more times in his career, winning only once.