Mayweather/Pacquiao II May Happen After All (Maybe)

When Floyd Mayweather and Manny Pacquiao finally met last May, the world hoped that it would finally see the fight it was hoping for. Even though the fight ended up being a stinker, the world clamored for a rematch after hearing Pacquiao had an injured shoulder. Could a healthy Manny get the job done against Floyd? Boxing fans everywhere want to know, but that would mean one thing would have to happen: Mayweather would have to put off his retirement for one more fight, and he has shown little interest in doing so.

Now, however, it appears that behind the scenes, he might be interested in it after all. The source of this is none other than Manny Pacquiao himself. While in Doha recently, he told the French press that he and Mayweather are in talks for a rematch. He also stated that he would fight either Mayweather or Amir Khan before the next elections in the Philippines in May (where he is running for Senate). 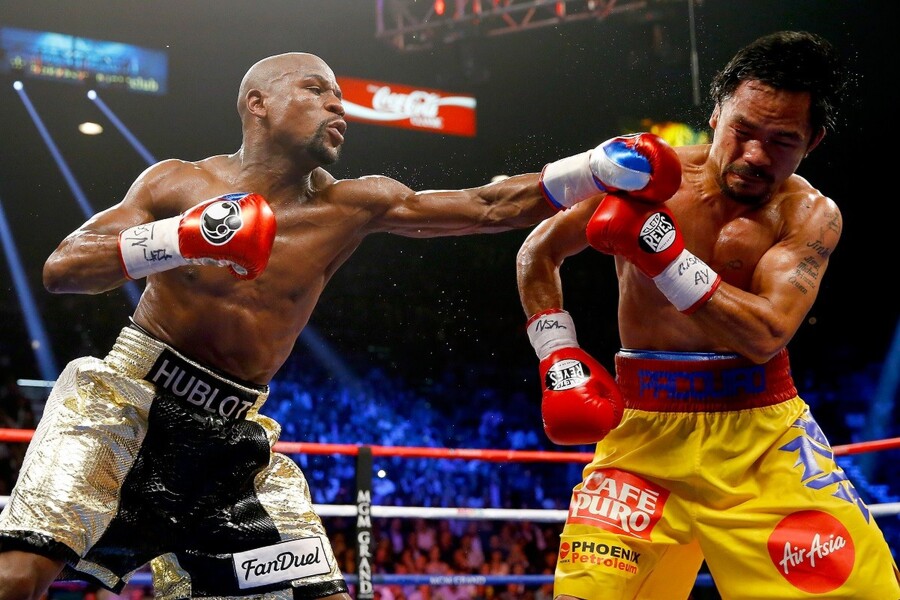 Well, isn't that interesting? Had it come from a friend, associate, or just about any other source, there would be little reason to believe it, but from one of the two fighters in question? No reason to think he would lie about being in talks for a rematch with Mayweather. Right?

If Mayweather does indeed plan on retiring, a strong win over his longtime rival would be the way to do it (not with that stinker against Andre Berto). Not only would he be able to shut the critics down for good by beating a healthy Pacquiao, but he could get one more massive payday as well as the record for best career record with a mark of 50-0 (currently tied with boxing legend Rocky Marciano with a record of 49-0).

Initially, Mayweather was open to another fight, but then he changed his mind after he felt that Pacquiao was talking too much trash, following the first fight. Knowing how much he loves money, it is hard to believe Floyd would shy away from another $200+ million payday. However, according to Pacquiao's promoter, Bob Arum, it isn't going to happen, and it isn't even being discussed:

"I have no idea what he's talking about," Arum told Yahoo Sports. "He said it, not me. But I have had no talks with anyone about that. None. Zero. Not one. Mayweather is retired and I take him at his word. But second, you know there is no way that Mayweather is ever going to fight in the Gulf, even if he did decide to fight again, so it's all [expletive]."

Arum went on to say the confusion could very well be because of a language barrier. Even by Manny's own words, it doesn't sound like it is a sure thing or if there is even much of a chance it will happen:

"I will fight anybody, anywhere. I am going to fight probably before the election. The election is coming next year, May, and before that I will probably have one fight."

Sounds like he just wants to fight, but he couldn't care less if it is Mayweather or Kermit the Frog he opposes.

If the boxing gods decided to smile down on fans and make this one happen, the stage will be set for the most watched fight in boxing history. It will likely be the final one for Mayweather, and Pacquiao has said his next fight will be his last. Tack on the desire the world has to see Mayweather lose, and the general belief/hope that a healthy Pacquiao may be able to get it done, and Mayweather may very well set a new record with his final payday.