Marshawn Lynch announced his retirement during the Super Bowl with possibly the most succinct tweet in history. The running back who brought Beast Mode to the NFL had an illustrious nine-year career with the Buffalo Bills and Seattle Seahawks. He hangs up his cleats with 11,091 total yards and 83 career touchdowns. He's a five-time Pro Bowler, appeared in two Super Bowls, winning one, and is 24th on the all-time rushing touchdown leaders list.

Perhaps, though, his most impressive achievement is that he hasn't spent a single cent of the $49.7 million he made during his career.

This thriftiness was revealed by NFL Network's Ian Rapoport, who recently appeared on a segment for "The Ian & Puck Show" on 950 AM KJR in Seattle.

According to Rapoport: "Marshawn Lynch has a lot of money. He hasn't spent a dime of his actual playing money… ever."

Lynch was drafted 12th overall by the Bills in the 2007 NFL Draft. Compared to what star players make today, he signed a fairly pedestrian five-year, $19 million contract. During that contract, he was traded to the Seahawks, having earned about $14 million from his rookie contract. With Seattle, Lynch signed a four-year, $30 million extension before the 2012 season, and just finished the first year of a two-year, $24 million contract. That brings his career earnings to just shy of $50 million. 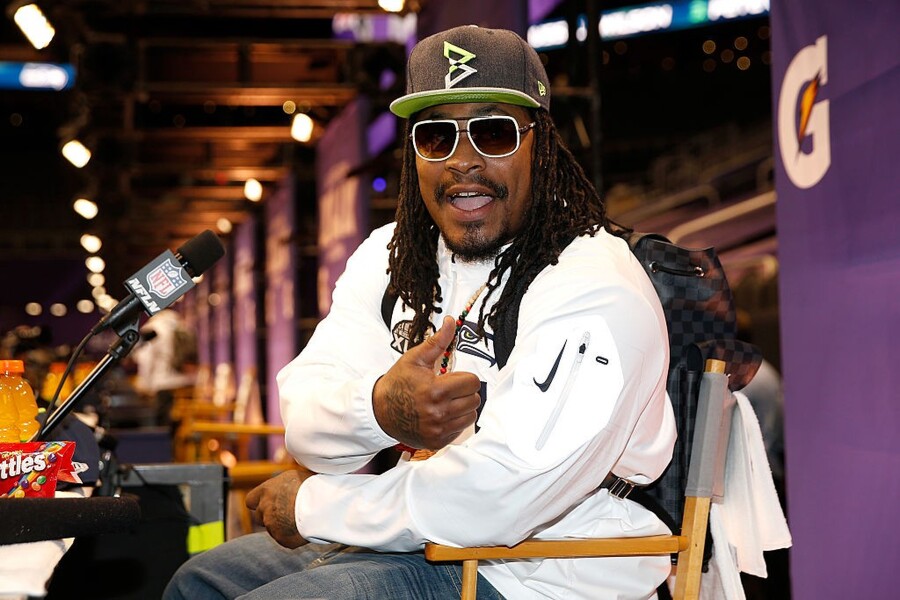 Of course, Lynch is still spending money, it's just been what he's made through endorsement deals. He's known for eating Skittles after touchdowns, so the candy company locked him up to help sponsor them. As an avid gamer, Lynch has partnered with Activision, and he's also got deals with Nike, Pepsi and Progressive Insurance. He makes about $5 million per year through those deals, according to Forbes.

That endorsement money has also gone to the variety of fines Lynch racked up over his career. Whether it was wearing lime-green cleats, grabbing his crotch while jumping into the end zone, or not speaking with members of the media, the NFL found a lot of ways to take money from the running back. For his part, Lynch has matched some of his fines, donating an equal amount to charity.

He's already working on yet another business venture, as well. He recently opened a Beast Mode brick and mortar store in Oakland, where fans can buy his brand's apparel, ranging from hats to shoes to tops. A portion of opening-day sales went to Lynch's Fam 1st Family Foundation, which helps at-risk youth, and the long-term goal of the shop is to develop programming for young members of the community.

It looks like Lynch's business savvy will continue now that his playing days are over. And even if a deal or two ends up not working out, he's got a nice little nest egg to fall back on.