By Travis Pulver on September 10, 2015 in Articles › Sports News

When the average person dreams of going on a vacation, they think about the beaches in Florida, a resort down in Mexico, or maybe a cruise. None are cheap, but if people save for a little while they can afford them without breaking the bank.

That's what normal folks do, but what if you are filthy stinking rich and famous – like Magic Johnson?

The man is worth a cool half billion dollars, a fortune he amassed after taking his meager earnings from his basketball playing days, investing wisely, and selling at the right time. Over the years, the former Los Angeles Lakers star, through Magic Johnson Enterprises, bought a 4.5 percent stake in the Lakers, which he later sold for $50-60 million, sold a chain of Starbucks stores for about $75 million, and bought a piece of the Los Angeles Dodgers.

So when you make multi-million dollar deals like they are going out of style, you deserve to have a nice vacation, right? Maybe one that includes an exotic location, celebrity friends, and the best amenities money can buy all packed on to a 230-foot luxury yacht.

That is exactly what Magic and his wife are getting for $527,000/week from French billionaire Bernard Arnault to cruise the waters of St. Tropez, France. Yes, folks. He is spending half a million a week for a boat. Oh – and he's doing it for four-six weeks (reports have varied). Not a bad little vacation, huh?

Well, you get to say you vacationed on the same yacht as rock legend Bono and former British Prime Minister Tony Blair. You get a crew of 18 catering to your every need, a gym, a bar, driving range, sauna, a movie theater, and of course Wi-Fi (because even Magic has to set his fantasy line-ups!). One thing you don't get is a frequent cruiser discount.

This has been a yearly vacation for Johnson for the past several years. 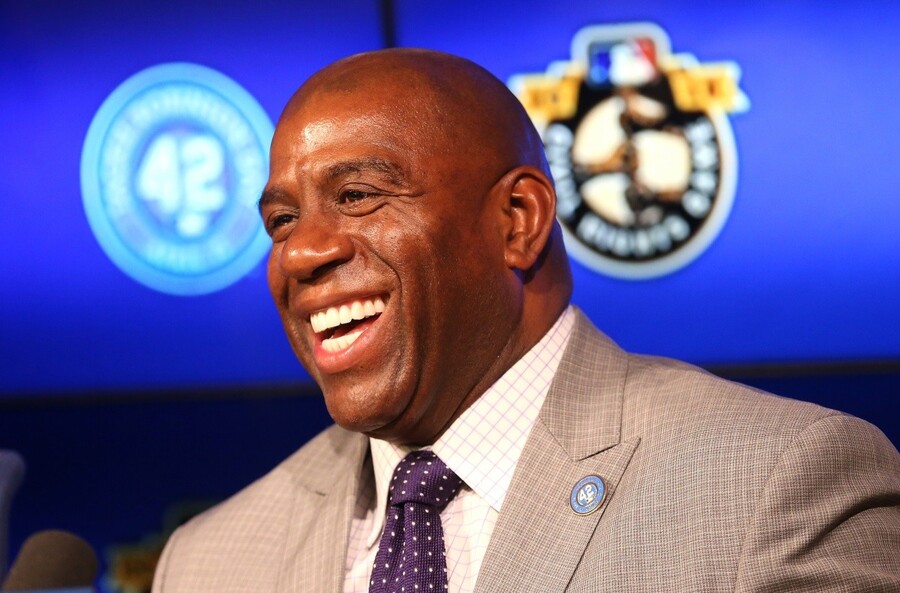 Does it get boring cruising the waters of St. Tropez with his wife? If it does, we will never know (because Magic is not stupid enough to answer that question), but as it turns out they are often not alone during their vacation. They have had several celebrity guests including Samuel L. Jackson, Lionel Richie, Prince Albert of Monaco, Formula 1 World Champion Lewis Hamilton.

Samuel L. Jackson chips in while he's on board, but typically Magic just foots the bill himself. When you are worth $500 million, you can certainly afford it.