Magic Johnson had a fantastic basketball career. A five-time NBA champion, he won three regular-season MVP awards and made the All-Star team 12 times. He also led one of the most exciting franchises in NBA history as the point guard for the showtime-era Lakers. Yet when he retired in 1991 (and again in 1996 after a brief comeback), he was already well into the next chapter of his life: being a businessman.

And boy, has Magic succeeded in his second career. Johnson has had his own music label, movie theaters, and film company. He's been a studio analyst for Turner Networks and ESPN, and created the Magic Card, a pre-paid MasterCard designed to help low-income people save money. He's also developed a contract food service (Sodexo-Magic) and is the only franchisee in Starbucks history. Oh, and he's currently the co-owner of the Los Angeles Dodgers, Los Angeles Sparks, and MLS's Los Angeles Football Club.

He credits basketball as developing his competitive drive and persistent mentality. Johnson began thinking about business ventures while still playing, cold-calling 20 CEOs and asked them out to lunch to pick their brains and learn from their experience. They helped him evaluate himself and what he needed to do to achieve success. That led to the creation of Magic Johnson Enterprises.

An early Johnson venture was investing in movie theaters. His first one topped revenue for its opening weekend and was among the highest-grossing in the industry. Within three years of his retirement, he became a minority owner of the Lakers, paying $10 million to do so.

His next goal was to deliver Starbucks locations throughout the United States. Like his movie theaters and other investments, he had a special focus on areas with a high population of African-Americans.

Magic Johnson is the ONLY person in history who has been given the opportunity to franchise a Starbucks. 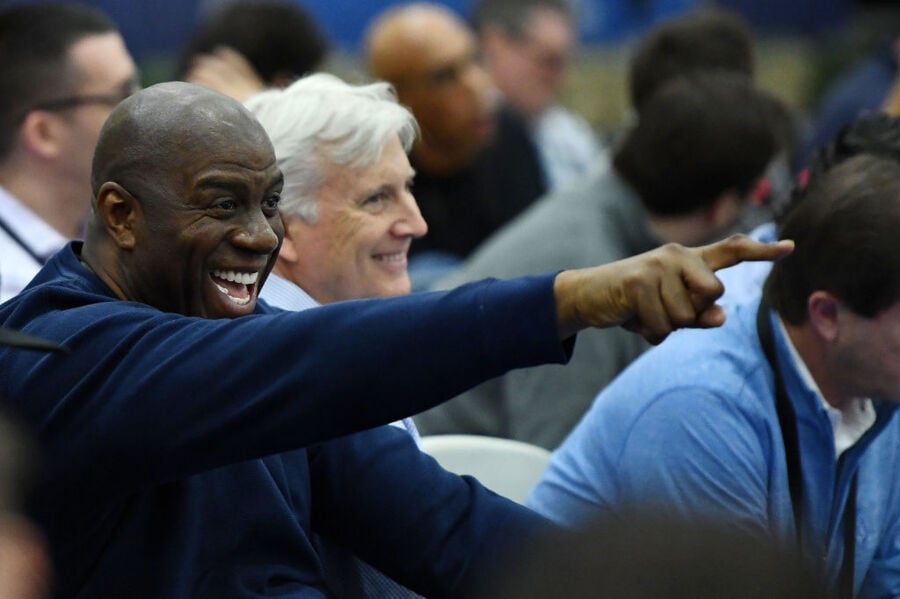 Johnson quickly learned that the customer is always right – a lesson he got after his first business venture, a sporting goods store, failed. He modified the Starbucks locations' music playlists and substituted pumpkin pie and peach cobbler for scones, since those treats were in higher demand among customers.

Over a span of six years, Johnson developed 125 Starbucks stores. The partnership, called Urban Coffee Opportunities, put Starbucks in urban areas throughout the country. After a dozen years, Johnson sold his interest in Starbucks back to Starbucks for a massive profit.

Magic didn't rest for long, though. He used his money from the Starbucks sale to buy the Los Angeles Dodgers in 2012 for more than $2 billion.

That seemed like a high price tag to many people, but Magic had done his research. In an interview, he said he knew an upcoming television deal for the league and team was valued at $9 billion, and even the land Dodgers Stadium sat upon was worth $3 billion.

However, when Johnson took over the team, the Dodgers were struggling with attendance. Again, thinking from the perspective of the customer, Magic put in a pavilion for fans to stand, socialize, and – most importantly for the team – spend money on drinks.

Johnson realized millennials come to the game for the experience, not just for the action on the field. By tailoring a Dodgers game to those expectations, Magic helped the franchise boost its attendance numbers.

And being in Los Angeles, Magic had to obtain a Disneyland contract. He's cited that as one of his markers of success.

Of course, things weren't always easy for Magic. Ten different banks turned him down when he tried to borrow money. And despite his eventual success with Starbucks, it took him six years before the company finally agreed to a partnership. He also turned down an offer for "a lot of stocks" from Nike founder Phil Knight if he signed on with the company. Magic didn't know about stocks at the time, but still regrets that offer to this day.

Johnson created the Magic Johnson Foundation in 1991 after announcing he had HIV. Though initially aimed to help people with HIV, the foundation has since branched out to include other charitable efforts.

Through it all, Johnson has relied on two simple mantras: hire people smarter than you, and learn from your mistakes – and then change.

Magic says he hires a lot of young people because his old way of thinking can get him into trouble and limit his chances of success.

Perhaps more than anything else, Johnson's business ventures have come with great determination. He admits that not everyone believes in his businesses, but he doesn't feel sorry himself. Instead, he keeps going, knowing the lessons he's learned will bring him good fortune.

Oh and btw, did we mention that Magic Johnson's net worth is $600 million 🙂