In the past, athletes could make some good money with product endorsements. We all remember Mean Joe Greene taking a sip of Coca-Cola, or Michael Jordan and Larry Bird playing an epic game of H-O-R-S-E to win a McDonald's meal.

Nowadays, athletes can still make a mint from endorsing a product, but their involvement often goes much deeper than simply showing up for a commercial shoot. Take a look at Carolina Panthers linebacker Luke Kuechly, who just signed a deal with nutrition startup Eat the Bear (ETB). And by "signed a deal," we mean he's serving as just the third equity investor in the company, and he has a seat on ETB's board of directors.

ETB's CEO Jude Colangelo projects the company, which specializes in "clean and lean" protein powders and supplements, will do $4 million in sales this year. That's not a huge number by any means, though having Kuechly onboard certainly raises the profile of ETB.

It's not clear how much Kuechly has invested, but after signing a $62 million extension with the Panthers last year, the linebacker is looking to make a few moves off the field, too. He's always been interested of the business side of things; however, he's still taking the time to research any potential deals he signs.

"The lifestyle I grew up with is still the lifestyle I live now: things in moderation, be smart with what you have," he says. "It's not going to be there forever. A football career is a finite career." 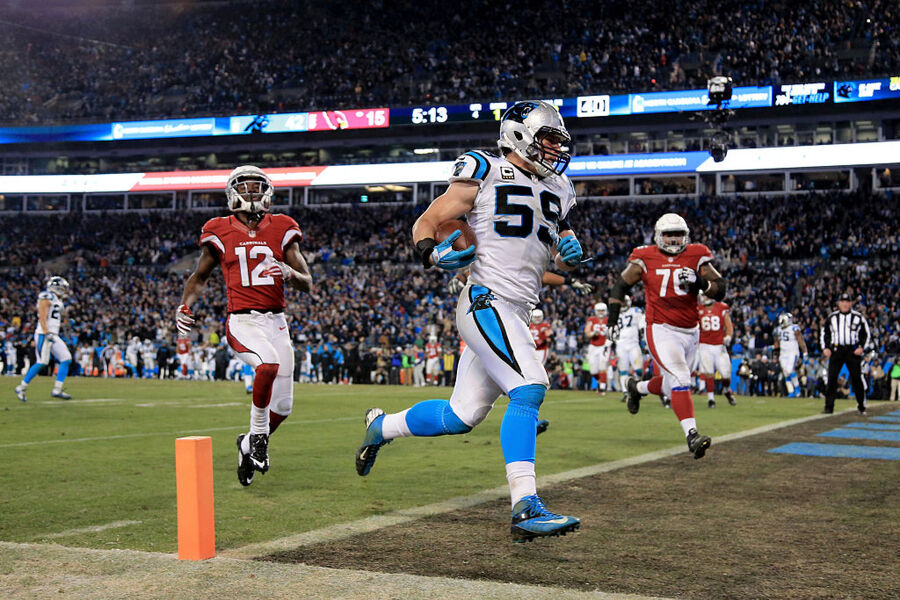 Kuechly is only 25, though he knows he plays a game where a career-ending injury is always a concern. He's seen other athletes investing in their futures, and figures it's his turn to lay the groundwork for when his playing days are over.

He can look to fellow NFL player Marques Colston for inspiration. Colston has invested in several startups in the performance and health and wellness industries. Not only does his existing knowledge of those areas minimize the due diligence Colston has to do, he's able to provide his insight to those companies, effectively helping shape their futures.

Kuechly sees a similar opportunity with ETB, realizing he can contribute to both the company's fame as well as its business strategy. He's not simply taking a supplement and smiling for a television camera, he's making an impact on the business and its long-term achievements.

In the NBA, stars like the Knicks' Carmelo Anthony and former Laker Kobe Bryant have gotten involved with Silicon Valley companies, and Steph Curry has received equity stakes from Under Armour. He's not alone, either – the company is starting to hand out equity to all of its celebrity endorsers.

Of course, endorsement deals can backfire for a brand: Adidas signed Derrick Rose to the largest endorsement deal in history. Soon afterwards, Rose tore his ACL, and more than four years later, he's never returned to the same level on the court.

ETB and Kuechly are both based in Charlotte, something that Colangelo thinks will help the partnership. Colangelo, who has helped build and restructure companies while at Merrill Lynch and UBS, joked that Kuechly will someday be "coming for his office."

Until then, Kuechly will be plenty satisfied sharing his experiences to help his first investment grow.