Life has officially turned around for Bobby Petrino. Just a few short years after being fired from Arkansas due to a scandal involving a former student, he was hired to keep the Louisville program on track after Charlie Strong departed for Texas. Strong had it pointed in the right direction, but left for greener pastures. Two years later the school has been impressed enough with the progress the program has made to give him a raise.

Two years later, the school has been impressed enough with the progress the program has made to give him a raise. After guiding the program to a 9-4 record in 2014 and an 8-5 finish last season, Louisville decided to sign him to a new seven-year deal worth $30.625 million. The deal runs through the 2023 season.

Things were on the up and up during Strong's tenure, so when he left following the 2013 season, the school wanted to do whatever it could to keep the program from slipping. So they hired the guy that guided the team to its highest season-ending rank ever (No. 6 in the AP Poll in 2004 and '06) – Bobby Petrino.

The decision makers at Louisville were not too concerned about his past transgressions, just whether he could keep the program moving onward and upward. He had worked wonders with the program during his first tenure (from 2003-06). Could he do it again? 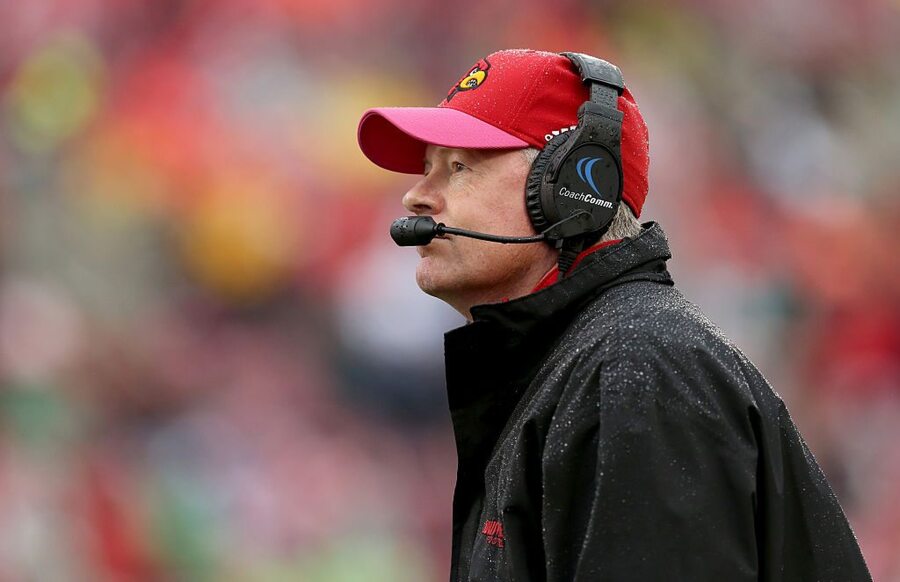 The school board must have felt confident that he could, since they signed him to seven years at $24.5 million. To make sure he wouldn't try to leave after just a few years again, his buyout was set at $10 million for the first four years.

Petrino understood why the school included it in his contract, but said it would not be necessary. He referred to Louisville as a "destination job," the kind of school you want to stay at for the duration of your career.

It is not unusual to see a head coach receive an extension just a couple of years into a contract. However, it typically happens after the team goes to a major bowl game or the national championship (like Dabo Swinney who recently received an extension with a raise from Clemson).

The Cardinals have not had any kind of comparable success yet during Petrino's return, but the school sounds confident that good things are in store with Petrino as head coach.

"There's a very, very small handful of great coaches in this country," athletic director Tom Jurich said. "Obviously, we have one of them. I'm going to do everything in my power to make sure he stays with us and finishes his career with us and enjoys his time here."