How Long Can The Warriors Dynasty Stay Together?

The Golden State Warriors have had one of the best three-year runs of any team in NBA history. They've taken home two championships and won an NBA-record 73 games during the regular season the one year they didn't win the title. Even better, the Warriors big four of Kevin Durant, Steph Curry, Klay Thompson and Draymond Green are all under 30 years old and in their primes. Things are good in the Bay.

However, things are about to get expensive, real quick.

Though Thompson and Green are locked into long-term deals, Curry, Durant, Andre Iguodala and Shaun Livingston are all free agents this offseason. Curry, who's been vastly underpaid his whole career – there are 81 players making more than him this season – will likely seek a max contract, which will be five years and about $205 million.

Once the Warriors sign Curry, they'll look to re-upping Durant. Because they don't own Durant's Bird Rights, the team would have to create cap space to sign him to a deal worth a max of about $35 million. The forward has said he'd be willing to take a discount to stay in Oakland. If that holds true, it would help the Warriors significantly.

By taking just a modest pay cut to $31.8 million – still a 20 percent raise from what he made this year – Durant will be making a sacrifice to keep Iguodala and Livingston in the mix. His willingness to take a discounted deal will probably be the difference in keeping the two top performers on Golden State's bench. 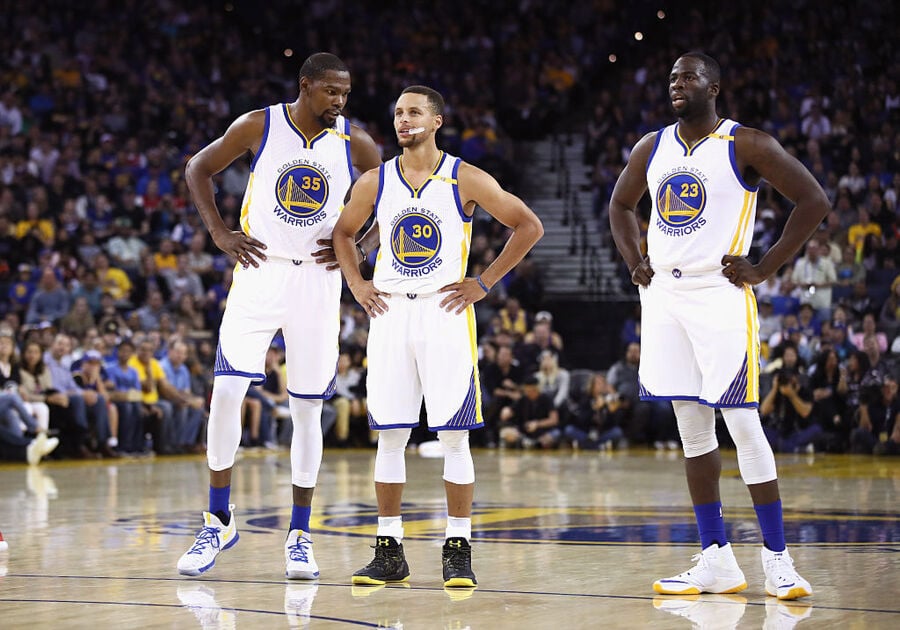 There are two ways to look at this. One is that Golden State has to re-sign Iguodala and Livingston because Durant is giving up money in order to allow the Warriors to keep their championship roster intact. The other viewpoint is that while the power four of the Warriors is worth the price no matter what, everyone else is expendable.

The latter has been more the Warriors style lately. They got rid of Harrison Barnes, Andrew Bogut, Festus Ezeli and other minor bench players to bring in Durant. It wouldn't be surprising to see a similar move this summer. Golden State believes Iguodala is worth $18 million a year, at most, and that Livingston is worth about $10 million a year. If teams offer more money to try and pry those two away, the Warriors will likely let them walk.

Durant, meanwhile, has adopted LeBron James's method of signing contracts – one year at a time. After two one-year deals, Durant can sign for five years and about $200 million. That'll push the Warriors payroll towards the salary cap ceiling, if not straight through it.

The team will also have to consider the Designated Player Extension, a five-year max deal that can only be provided by a player's current team; the player must also earn All-NBA team honors or win MVP or Defensive Player of the Year. Both Thompson and Green could be eligible, but the team will have to decide who gets it. The player that doesn't receive the Designated Player Extension could be traded or leave in free agency.

That part is far off, though. The Warriors won't have to worry until Thompson can become a free agent in 2019. By then, their core players will be a little older, and the team will have to consider how they'll look at the end of their deals. Will they still be playing at such a high level?

If the answer is yes, the Warriors may be willing to pay the luxury tax. For every dollar the team is over the salary cap, they have to pay that same amount to the league. In subsequent years, the penalty is even harsher, a "repeater tax" to encourage teams to stay under the salary cap. If the Warriors make it to five or six straight championships, ownership might be okay with a $200 million-plus payroll that is consistently over the cap.

Dynasties can fall apart for any number of reasons. Injuries occur, other teams improve faster than expected, and sometimes the strain of playing together for so many years simply wears a roster down. However, the Warriors have a chance to keep something special going for a long time, and that starts with making decisions this summer.