Lionel Messi is perhaps the most accomplished soccer player in the world. He's won six FIFA Player of the Year awards and six Ballon d'Or awards. He brought home 34 trophies and scored 672 goals during his time with FC Barcelona. And now, he's setting his sights on somewhere — and something — new.

In an emotional press conference, Messi tearfully announced he'll be departing FC Barcelona after the club was unable to sign him to an extension. Instead, he's headed to France to play for Paris Saint-Germain.

The deal is reportedly worth $41.29 annually over two years, with an option for a third year. There's also a $30 million signing fee and additional bonuses, including jersey sales. When Messi's rival, Cristiano Ronaldo, signed with Juventus, fans bought more than $60 million of his shirts in 24 hours. Messi can probably expect something similar, bringing his annual income more to the $75 million to $100 million range.

But the PSG deal also includes a unique element: part of it will be delivered as cryptocurrency. 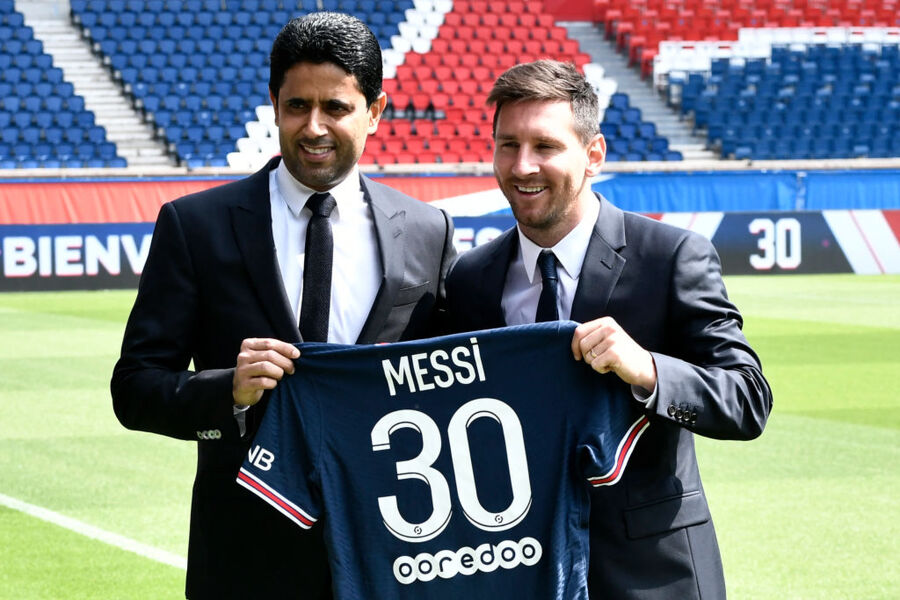 The club announced Messi will receive a "welcome package" that includes the $PSG token. Created in January 2020 in partnership with fan rewards app Socios, the token aims to build a new fan community within the club. Manchester City also launched a fan token in March of this year.

As news of Messi's signing broke, the price of $PSG tokens skyrocketed. PSG also expects its revenues to greatly increase as a result of the signing.

Messi will experience a change of scenery in both location and salary. He's coming off a four-year contract with FC Barcelona that paid him a whopping $674 million over its lifetime. But with the club experiencing severe financial strain, keeping their star player wasn't feasible.

Per league rules, player salaries can't exceed 70% of club revenue. Even if Messi had taken a 50% pay cut — something he offered to do — the club's payroll would have exceeded 110% of revenue.

It'll be unusual to see Messi in a new kit at first. However, he's still playing at a high level, so we can expect Paris Saint-Germain to compete well, both on the field and in the crypto space.