Over the weekend, Spanish newspaper El Mundo dropped an earth-shattering bombshell. The bombshell wasn't about politics, business or COVID… It was about sports. Specifically Lionel Messi's contract. The revelations have left much of the world, even non sports fans, flabbergasted. Gobsmacked. Stunned. We all knew Lionel Messi was an extremely well-compensated athlete. Certainly one of the highest paid athletes in the world. But his actual contract numbers are simply staggering. They feel like they're from the future, or from another planet. If the numbers are accurate – and they appear to be, because Barcelona is now threatening to sue El Mundo – it is by far the largest contract in the history of professional sports.

In America, the nitty-gritty details of superstar mega sports contracts are made extremely public when the ink is barely dry. In Europe, superstar soccer contracts are frequently kept confidential.

Prior to El Mundo's bombshell reports, most outlets (including CelebrityNetWorth) estimated that after signing a new contract with FC Barcelona in 2017 Lionel Messi's base salary jumped from $44 million to $80 million. That made him the highest-paid soccer player in the world, topping the $70 million Cristiano Ronaldo earns each year from Juventus. Technically, Ronaldo's base salary is just $36.4 million, but his contract is chock-full of easy-to-hit milestones that bring his earnings to the $70 – $80 million range.

Messi makes around $40 million per year from endorsements and other activities, so using the $80 million number we typically estimate that he makes about $120 million per year. An extremely impressive sum. But, as it turns out, off by A LOT.

According to El Mundo, the total value of Lionel Messi's 4-year contract is:

Built into that $674 million is $140 million classified as a "renewal fee" – money paid just for accepting the contract and a $94 million "loyalty fee."

El Mundo claims Messi has "earned €511,290,052 ($621m), almost 92 percent of the possible total" contract. He lost a chunk of money after COVID prevented him from hitting a handful of milestones. 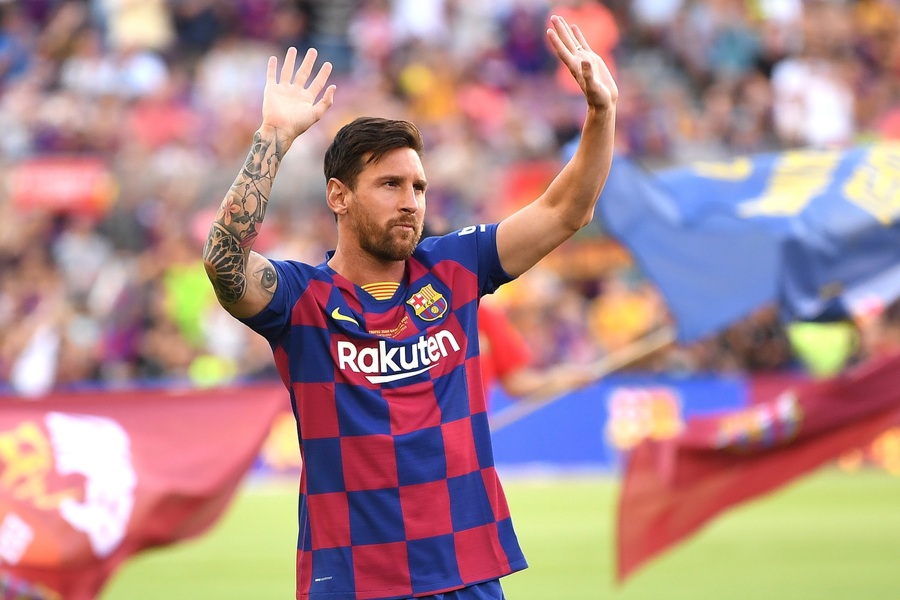 Patrick Mahomes was previously believed to be the owner of the largest contract in sports history. In July 2020 Patrick signed a 10-year deal with the Kansas City Chiefs that is worth a minimum of $450 million, but ultimately could be worth $503 million. That works out to $40-45 million per year.

Mahomes' contract shattered the March 2019 contract Mike Trout signed with the Anaheim Angels which was previously believed to be the largest contract in history. Trout's 12-year contract was worth $420 million. That works out to around $35 million per year. Literally chump change for Messi. Lionel earns Mike Trout's entire annual contract – which not long ago was believed to be the largest in sports history – in TWO AND A HALF MONTHS.

Another interesting revelation is that Barcelona is sitting on around $1.36 billion in debt, roughly 74% of which is from player salaries. El Mundo also reported that Messi has been actively trying to get out of his contract, even though he only has six months left. I don't really follow soccer, but a friend explained to me that Barcelona has been kind of sucking in recent years.

This contract revelation is such a bombshell that Barcelona is actually threatening to sue El Mundo. In a statement, Barcelona said:

"In view of the information published today in the newspaper El Mundo, in relation to the professional contract signed between FC Barcelona and the player Lionel Messi, the club regrets its publication given that it is a private document governed by the principle of confidentiality between the parties. FC Barcelona categorically denies any responsibility for the publication of this document and will take appropriate legal action against the newspaper El Mundo, for any damage that may be caused as a result of this publication.

FC Barcelona expresses its absolute support for Lionel Messi, especially in the face of any attempt to discredit his image, and to damage his relationship with the club where he has worked to become the best player in the world and in football history."