Lionel Messi's 2-Year Contract With Paris Saint-Germain Has Been Revealed! Is He Still The Highest Paid Athlete In The World?

After months of speculation, last week it was finally confirmed that Lionel Messi's career at Barcelona was over. And then yesterday it was revealed that Lionel had signed a new contract with Paris Saint-Germain. This move is an earth-shattering event in the soccer world. Lionel spent two decades with Barcelona, having joined the team as a 13-year-old prospect. He is now a 34-year-old superstar with a net worth of $600 million who scored 672 goals in 778 games with Barcelona, while winning a record six Ballon d'Or awards, among countless other awards and accolades.

Under his last contract with Barcelona, Lionel Messi was the highest-paid soccer player and highest-paid athlete, overall, in the world. Will he maintain those two titles with his new Paris Saint-Germain contract? We now know the answer! 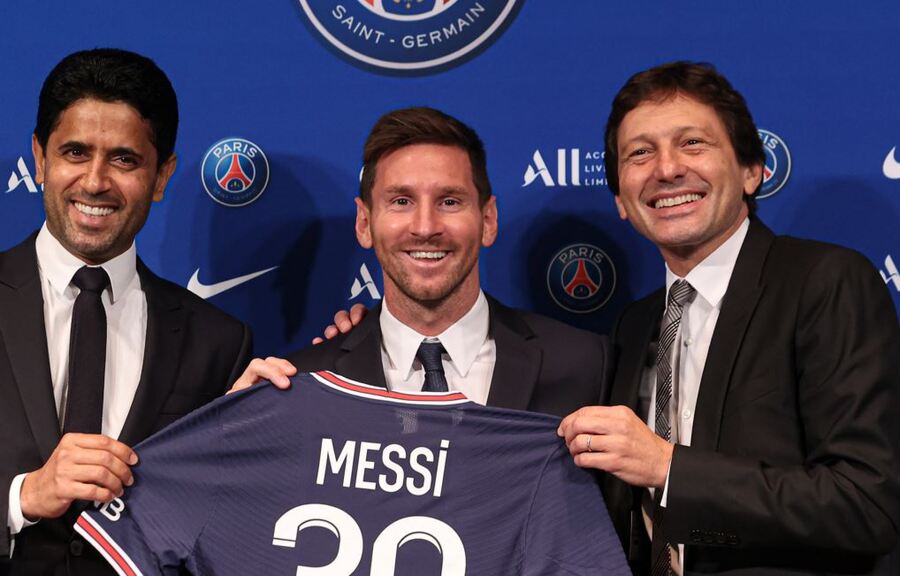 In January 2021, the Spanish newspaper El Mundo released a bombshell report about the contract Lionel had been playing under since 2017.

Prior to El Mundo's reports, most outlets (including us here at Celebrity Net Worth) believed that Lionel Messi's base salary jumped from $44 million to $80 million when he re-signed with Barcelona in 2017. Even at $80 million, that was easily enough to make Lionel the highest paid soccer player in the world, topping Cristiano Ronaldo's $70 million base salary and Neymar's $75 million.

In reality, according to contract documents obtained by El Mundo, in 2017 Lionel signed a 4-year $674 million contract with Barcelona. That worked out to $168 million PER YEAR on an average annual contract basis.

But even after those upfront payments, Lionel was still earning $110 million in base salary per year!

Lionel desperately wanted to stay with Barcelona. He even offered to accept a 50% pay cut to stay with the team. Unfortunately, the decision was largely out of both Lionel and Barcelona's hands.

According to league rules, player salaries can not exceed 70% of club revenue. Unbelievably, even if Messi accepted a 50% pay cut, the club's payroll still would have exceed 110% of revenue. So there just wasn't a viable mathematical way for Messi to stay with the only team he's ever known.

Taking His Talents To Paris

Today we are learning a bit about his contract. It's being reported that Lionel has signed a two-year contract with PSG that will pay $75 million per year.

So if we're judging solely on base salary, Lionel is no longer the highest-paid soccer player in the world. That honor goes to his new PSG teammate, Neymar, who makes $76 million per year.

Highest Paid Athlete in the World

On the other hand, Lionel's contract with PSG also entitles him to a cut of jersey sales and performance bonuses. These sweeteners will likely bring Lionel's annual PSG income to well over $90-$100 million.

Thanks largely to Lionel, Barcelona consistently sold more jerseys than any other sports team on the planet. It estimated that Barcelona sold two million Lionel Messi jerseys each year. That reportedly generated around $50 million in revenue per year for the club. It probably wouldn't be crazy to assume PSG will generate AT LEAST that much each year. And it probably wouldn't be crazy to assume Lionel will be receiving 10-20% of this revenue, which would amount to an additional $5-10 million in annual earnings.

And then there are endorsements.

Lionel Messi earns at least $40 million from endorsements every year. So when you add $40 million plus a conservative $90 million per year all-in from PSG, his annual earnings will top $130 million. That should be enough for Lionel Messi to maintain his crown of highest-paid athlete in the world, with Cristiano Ronaldo coming in second with $120 million and LeBron James coming in third with $100 million.