If you're even remotely familiar with the sport of boxing, you've no doubt heard legendary announcer Michael Buffer's voice filling an arena with his famous catchphrase: "Let's get ready to rumble!"

In addition to starting off boxing fights around the world, Buffer has made a handful of cameo appearances in movies and television shows and even had a video game series – Ready 2 Rumble Boxing – named after him.

Now, nearly 35 years later, Buffer, 71, has announced that he's considering retirement. When he does finally hang up his microphone, he plans to sell the rights to his phrase.

How much will a buyer have to put up to score the catchphrase that Buffer trademarked in 1992? Well, Midway reportedly paid Buffer $100 million to license his phrase its game, and he currently has a net worth of $400 million. Not too shabby!

Buffer hasn't always been so fortunate. When he was just 11 months old, his parents divorced and he was sent to live with foster parents in Philadelphia suburbs. At age 20, Buffer enlisted in the army during the Vietnam War, serving for three years. Upon returning home, he spent the next 15 years unsuccessfully working on an acting and modeling career.

Finally, at age 38, Buffer, an avid boxing fan, decided to make a change. Noticing boxing announcers were dry and predictable, he embellished his accomplishments on his resume and scored a job in 1982. His charisma and model-esque appearance made him popular among audiences – within just a year, he was calling every box match promoted by Bob Arum's Top Rank on ESPN, bringing him in front of a national audience.

Even as Buffer's popularity continued to soar, he determined a catch phrase would help him cement the legendary status he hoped to achieve. Something he could say before the start of every match he announced. But what were the magic words? Buffer gave "Man your battle stations!" a try, but the crowd wasn't really feeling it. "Fasten your seatbelts!" didn't work, either, and only left confused fans looking around for a seatbelt to put across their laps. 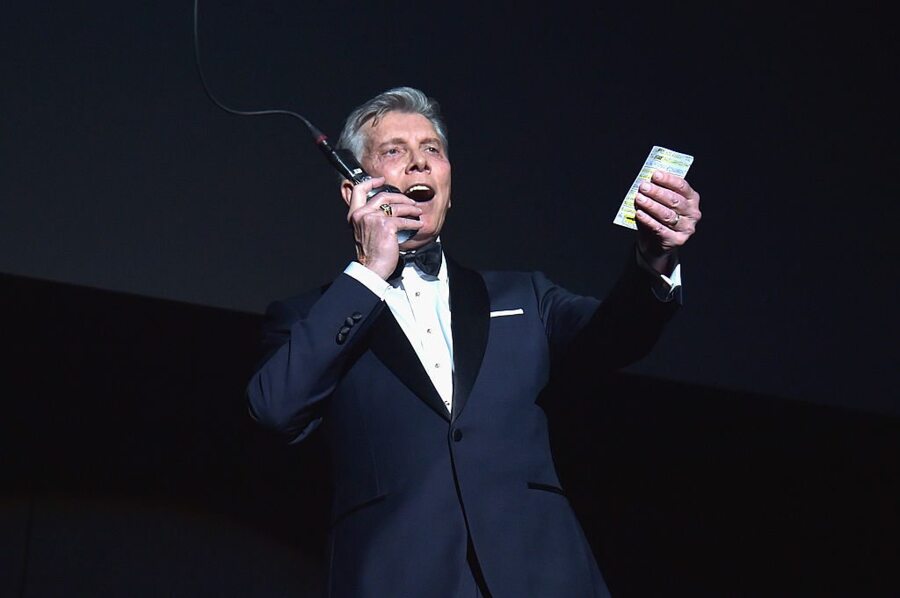 Fans loved it, and it opened up a ton of doors for Buffer. He was the exclusive ring announcer for every boxing match at Donald Trump's casinos, and was the voice of all World Championship Wrestling main events throughout the 90s until the league disbanded in 2001.

In addition, Buffer was featured in all kinds of movies and TV shows, including South Park, various Rocky films (most recently Creed), Mad About You, Phineas and Ferb, You Don't Mess with the Zohan, The Bold and the Beautiful, Rachael Ray, 2012, Love & Other Drugs, and The Fighter. That's quite the variety of cameo appearances, though he often played some sort of announcer, or simply himself.

Buffer was being paid handsomely for working events and making TV and film appearances, but he couldn't help noticing "Let's Get Ready To Rumble" popping up everywhere. Car dealerships were using his phrase, as were other promoters. The problem was, they didn't have his permission – they were simply taking advantage of an already popular catch phrase to sell their own merchandise.

Buffer's half brother, Bruce, told him to trademark "Let's Get Ready To Rumble." Bruce Buffer had been inspired by Pat Riley, he trademarked the term "three-peat" when the Los Angeles Lakers were attempting to win a third straight title in 1989. They lost to the Detroit Pistons and the phrase didn't catch on immediately, but when the Chicago Bulls were gunning for the first of their three-peats during the 1992-93 season, the phrase re-entered the lexicon. That's when Bruce learned of the trademark, and suggested Michael take a similar path.

And boy, has the trademark proven to be a good idea. Anytime anybody wants to use the phrase, Buffer gets a check, like when "Jock Jams" featured "Let's Get Ready To Rumble," or any number of professional sports teams have used the phrase to get the crowd roaring.

Buffer already gets paid upwards of $100,000 to call a single fight. But thanks to his trademark, he's made nearly half a billion dollars from his simple catch phrase. Considering these impressive numbers, how much would a potential buyer pay to acquire the rights to Michael's famous phrase? Clearly, it will not be cheap. Early low estimates peg the value of the trademark at $50 million. The final bidding price could end being MUCH, MUCH higher though.

Will he make that much from selling the trademark? That remains to be seen, but whoever's thinking about buying the rights to use the catch phrase, they'd better be ready to rumble.