This year's NBA All-Star Weekend was extra full of festivities. The NBA celebrated its 75th Anniversary Team of stars past and present and unveiled a few new competition formats. Karl-Anthony Towns won the Three-Point Contest, a rare victory for a big man in that event. And the Slam Dunk Contest…well, the less said about that, the better.

The weekend ended with LeBron James hitting the game-ending shot in the All-Star Game, giving his team the 163-160 victory. But it was a remark LeBron made off the court that has left the entire NBA world buzzing.

"Wherever Bronny is at, that's where I'll be," James said to The Athletic. "I would do whatever it takes to play with my son for one year. It's not about the money at that point." 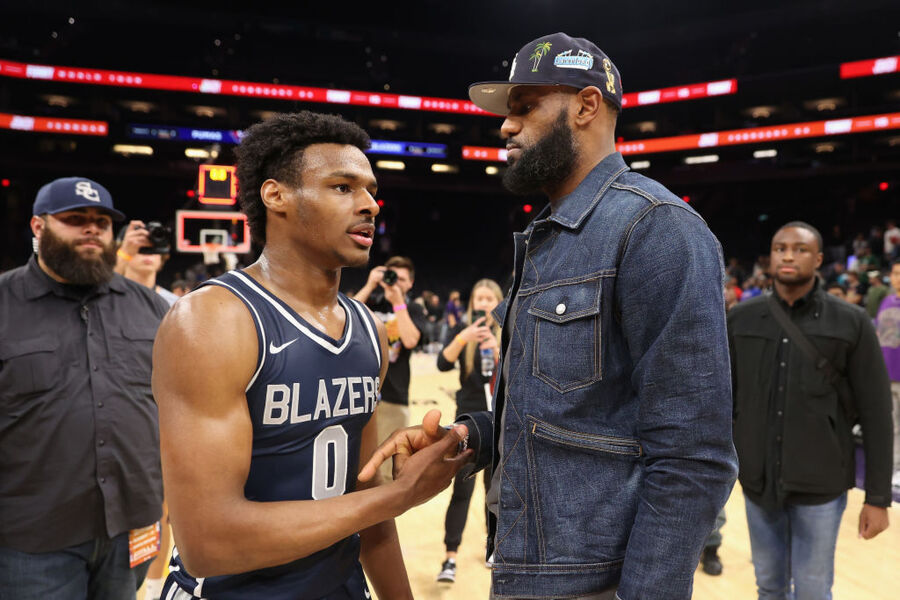 The elder James is a free agent after the 2023 season. Meanwhile, Bronny Jr. is a junior in high school right now. Due to the NBA's rules, he'd have to be at least one year removed from high school and turn 19 during that season's draft year. The traditional route means he'd first be eligible during the 2024 NBA Draft. However, if Bronny reclassifies his high school standing and graduates this summer, his birthday (October 6, 2004) means he could technically be eligible for the 2023 NBA Draft.

Let's say Bronny goes the traditional route and finishes up four years of high school. By the time the 2024-25 season starts, LeBron would be 40 and Bronny would be 20. We haven't seen a ton of 40-year-old NBA players over the years, but then again, we haven't seen someone built like LeBron James before.

While there may be a year of free agency purgatory, James is now in play for every franchise. Just how much money would he give up to play with his son?

James will make $41,480,544 this season, and he'll earn $44,474,988 during the 2022-23 season. At the level he's playing, it's not inconceivable that he would, under normal circumstances, sign another three or four-year deal worth $40-$50 million annually. Instead, to play with Bronny, James would be willing to take a massive pay cut and sign for as little as the veteran's minimum: $2.8 million.

Or, to put it another way—as The Action Network's Darren Rovell notes, James would give up making $2.8 million every five games to earning that for the entire season.

Don't feel too bad for LeBron, though. He's made about $330 million in on-court salary throughout his career and has likely surpassed a billion dollars in overall earnings, between his NBA salary, endorsements, and business ventures.

So, yes, LeBron is correct when he says it's not about the money. Playing with his son in the NBA would be an accomplishment no other player has achieved—and something that may never happen again.