When Ole Miss offensive tackle Laremy Tunsil pictured Draft Day in his dreams, he probably didn't imagine a scenario remotely close to what actually ended up happening. Tunsil probably thought he was going to be a first round pick… and he was… BUT, thanks to some social media shenanigans, he was taken much lower than expected. And that cost him a lot of money.

With the Philadelphia Eagles and Los Angeles Rams expected to pick quarterbacks (which they did), many thought Tunsil could go as high as No. 3 (to the San Diego Chargers), and no lower than No. 6 (to the Baltimore Ravens). The Chargers ended up taking Ohio State defensive lineman Joey Bosa. The Ravens went with an offensive tackle whose biggest transgression in college involved a few parking tickets, Notre Dame's Ronnie Stanley.

Tunsil ended up being taken by the Miami Dolphins with the 13th overall pick. Being drafted that high is nothing to be ashamed of, but most insiders expected the draft's best offensive tackle to be taken much higher. They certainly didn't expect him to be the third tackle taken off the board (Ronnie Stanley at No. 6 and the Tennessee Titans took Michigan State's Jack Conklin with the No. 8 pick).

So – what happened that caused Laremy's stock to fall?

For some crazy reason, minutes before the draft, he posted a video to Twitter that showed him taking a bong hit while wearing a gas mask. The video did not stay online for long, but it was up long enough to cause some serious reputation damage. 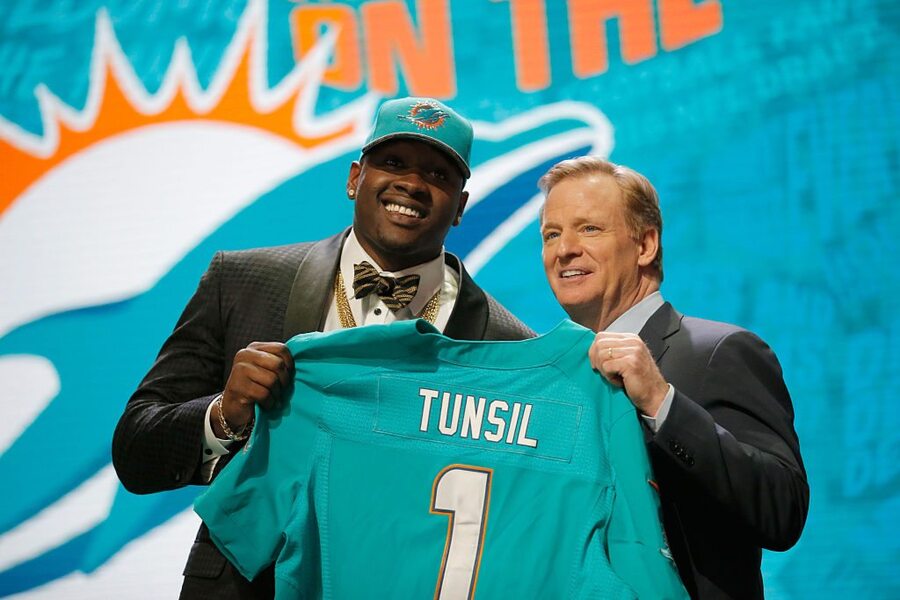 When asked about the video, Tunsil proved he is NFL-ready by giving the same excuse everyone does – he claimed he was "hacked," but also admitted the video was real.

"Somebody hacked my account," Tunsil told NFL Network's Deion Sanders. "It was a mistake. It happened years ago like I said before. Somebody hacked my Twitter account, and that's how it got on there. It's a crazy world. Things happen for a reason. I'm glad to be in Miami. I'm going to work my butt off and give it all I got."

Someone also got into his Instagram account and posted information that made it appear as if he had taken money from people while at Ole Miss to help his mom pay some bills. When asked about it, he admitted to taking money from a coach.

Tunsil handled the mess well Thursday night during interviews, and appeared eager just to move on and get to work.  He even said he will not press charges against whoever hacked his social media accounts. However, as soon as someone tells him how much money he lost out on, he will likely get a little upset.

So, thanks to whoever hacked his accounts, he lost from $8-13 million.

His stepfather, Lindsey Miller, was quick to be accused and vehemently denied any wrongdoing. "I don't know nothing about no video," Lindsey Miller said." I'm not even watching the draft," he also claimed.

He tried to use volunteer work as proof of his character, momentarily forgetting he is suing his stepson over alleged assault and defamation of character, stemming from an alleged assault last year. Miller says the assault was part of an argument over Tunsil being in contact with agents (which active college players cannot do). Tunsil says he attacked Miller after Miller attacked his mother.

While it is easy to blame Miller or whoever posted the video for the lost wages, it is not that person's fault. Had Tunsil not smoked marijuana, there would never have been a video to post.