Bears linebacker Lance Briggs announced his intention to retire today – at a Cubs game, of all places – after 12 years of playing in Chicago. Briggs, who has a net worth of $12 million, had been one of the most durable players on the team, missing just four games over his first decade of playing. But after injuries limited him to just 17 out of 32 games in 2013 and 2014, the seven-time Pro Bowler is finally calling it quits.

Briggs made a combined $9.25 million over the past two seasons, but when his contract was up last year, the Bears never offered him an extension. There were rumors that Briggs would join his old coach Lovie Smith in Tampa Bay, but… well, he'd probably be a Buccaneer already if that were the case. Briggs does think he could still contribute to a team, but has said he plans to join Comcast SportsNet as a Bears analyst. 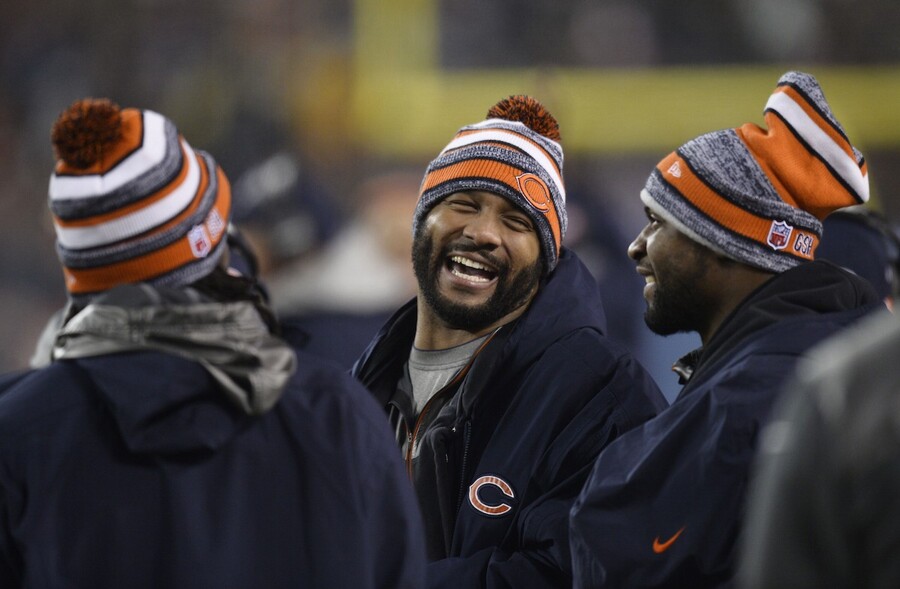 Lance Briggs was drafted out of Arizona in the third round of the 2003 NFL Draft. Over his career, he recorded 1,174 tackles, 19 forced fumbles, 15 sacks, 16 interceptions, and five touchdowns. In fact, he recorded a pick six in his first three seasons in the league. He played all of his seasons with the Bears, but his career almost took a vastly different turn in 2007.

Why? That was the year the Bears, fresh off a Super Bowl appearance, put a franchise tag on Briggs, guaranteeing him $7.2 million for the upcoming season. Even though his fellow Pro Bowl linebacker Brian Urlacher was willing to take a pay cut so the Bears could keep Briggs, they didn't offer a contract, just the franchise tag, which is only good for one year.

That didn't sit well with Briggs, who went on a Chicago radio show to lament over the amount of money he was making, saying he was fed up with the organization and no longer wanted to be a Bear. After demanding a trade, Briggs made some pretty damning statements, like "I'll do everything that's within my power to not be with this organization," and "I've played my last snap for them. I'll never play another down for Chicago again." He even said he was prepared to sit out the entire year if the team didn't trade him or release him.

The Bears did explore some trade offers, and almost dealt Briggs to Washington for linebacker Rocky McIntosh and a Redskins first-round pick. But that trade never materialized, and Briggs was more disgruntled than Grumpy Cat throughout the entire season, skipping a team meeting and a mandatory mini-camp session in the 2007 off-season.

Fast forward to 2008, and all was forgiven: the Bears re-signed Briggs to a six-year $36 million contract during the off-season. Then, Briggs requested a trade once again in 2011, when he asked the Bears for a raise and was denied.

We can only hope his analysis is more on point than his poker face, but Briggs had a very solid career for the Bears. Since he entered the league in 2003, no player recorded more stuffs (tackles of a rusher for negative yards) than Briggs' 83.5. And he'll be a Chicago legend for years to come for his part in the revival of the Monsters of the Midway. Along with Urlacher, cornerback Charles Tillman, safety Mike Brown and defensive lineman Tommie Harris, Briggs anchored one of the most fearsome defenses in NFL history. If the Chicago quarterbacks during that span weren't Rex Grossman and Kyle Orton, Briggs may have a Super Bowl ring to go with his career achievements.

Time will tell if he makes the Hall of Fame, though it's interesting to imagine how his career would have differed if he ended up in Washington. Similar poor quarterback play with a worse overall defense – would that have resulted in better individual stats, or just more displeasure at his situation?